10 Best Goku Tattoo Ideas You Have To See To Believe! 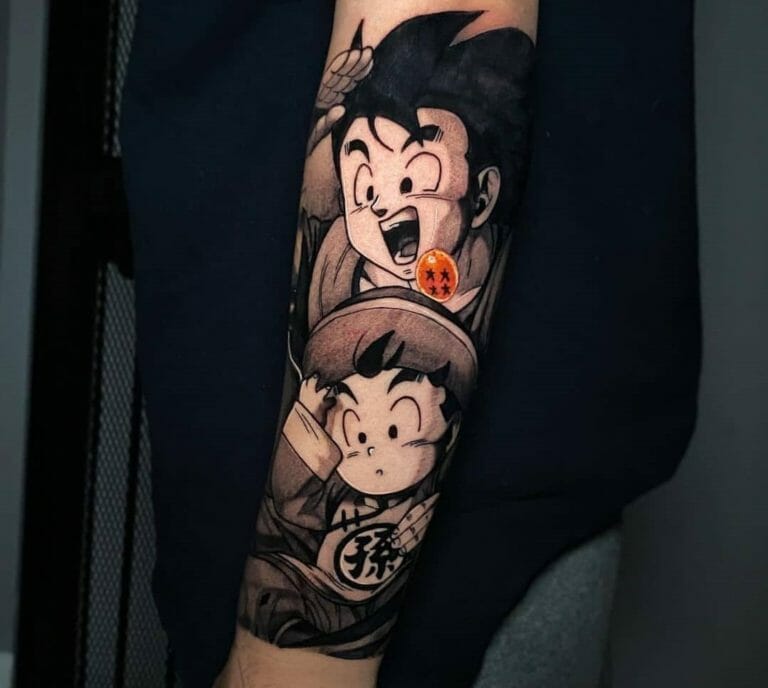 Are you a Dragon Ball Z fan who fancy getting a few Super Saiyan character tattoos on your hand? Here are some great Goku tattoo ideas put together by us.

Dragon Ball series since its release has been the most talked-about anime among children and as well as adults!

With other prominent shows aired on television, Dragon Ball Z might be one of the anime shows that has laid the foundation for the huge anime fan following the world has today. The heroics of the muscular and robust characters like Vegeta, Goku, Gohan, and others like Master Roshi, Frieza, Bulma have been fancied through and through.

Goku has undoubtedly been in the limelight of the show, the one true hero to Dragon Ball Z fans. Thus getting a Goku tattoo on your hand will be the utmost honour ardent fans can give to Dragon Ball Z. Plus there are a limitless number of Goku tattoo designs to choose from. Getting inked with a Goku tattoo will not only be relevant in the Dragon Ball tattoo community but also adds up to the mass appeal of people tattooing anime characters. Allow the anime fan inside you to go berserk as there remains an entire universe of best Dragon Ball tattoo ideas to explore.

The vibrant white eyes of Goku in this tattoo speaks volumes about his character and rightly so. The power and wrath of Super Saiyan Goku have been unmatched in the entire Dragon Ball Z series, this tattoo here is a perfect tribute to the anime character. The signature orange and blue colours have been accurately used and have blended into the tattoo flawlessly. However, that is not the only talking point here. The tattoo is not only an illustration of the Super Saiyan but also of a kid. In the bottom half of the arm, a kid Goku is seen riding on his Nimbus with his tail swinging high up in the air. This cute kid has a sweet smile on his face which is technically the polar opposite to the angry Goku tattoo drawn above. Hence this Goku tattoo design is a really cool illustration with a varied tone of expression. If you fancied both kid and the adult Goku, then this is one of the best Dragon Ball tattoo ideas you have been. looking for!

This Goku tattoo inked with only a tinge of black gives an oddly satisfying look to the arm. The fact that there is no colour in the tattoo is rounded off by the very detailed design of the Super Saiyan.

In this particular Dragon Ball Z tattoo, Goku has been depicted with the exact intensity as he has been on television. His rugged herculean body with various cut marks and shredded abdominal muscles give a vivid picture of the strength of Goku. The Super Saiyan surely looks raging with fury and is half-clad if one looks very attentively. The signature top wear of Goku has ripped apart is clearly visibly in the bottom of the tattoo. Although it is pretty small in size for it to be a tattoo sleeve on your arm, it cannot be termed as something minimalistic because of its heavy precision in terms of design.

One of the perks of this Dragon Ball tattoo is its lack of colours. A Goku ultra instinct tattoo such a this will separate you from the rest of the crowd.

This Goku hand tattoo features his biggest rival Vegeta along with him. The grey tattoo with shades of black is divided into three halves. Each of these halves represents a personality from the anime show. The very popular Goku-Vegeta rivalry has been the spotlight of Dragon Ball Z. The DBZ fanatics would absolutely love to see another Super Saiyan fight between the two. The first second and third half of the tattoo features Goku, Vegeta and Vegito.

What makes the tattoo different from the rest is the blue coloured hair of Vegito that differentiates between Vegeta and his Super Saiyan version. The tattoo in its entirety looks very crisp and sharp. The main element of the show that is Dragon Balls have been encased in the tattoo as earrings. Although neither Goku nor Vegeta has been seen wearing Dragon Ball earrings, the artist has made good use of his creative liberty by adding them into the tattoo.

In case you have both Goku and Vegeta on your favourites list, this can surely be one of the best Dragon Ball tattoo designs to ink on your arm.

This father and son tattoo featuring Goku along with his son Gohan is a delightful tattoo to ink on your arm. Just like Goku, Gohan has also been the talking point of the anime, because of the sweet and innocent child he is.

This is one of the best Dragon Ball tattoo which shows Goku and Gohan, partners in crime, out for a ride on the flying nimbus. While Gohan has been drawn as a perplexed child, Goku’s expressions are more clear. The green, orange and blue colour combinations have amalgamated perfectly to decorate the emotion behind the tattoo. A DBZ tattoo such as this will be a unique one to have especially if you are rooting for the father and son duo.

Anime lovers watching Goku launching his energy attack Kamehameha is undoubtedly one of the best Dragon Ball Z scenes to witness. In fact, that formed the main USP of the DBZ anime series.

This tattoo here depicts one of the scenes of the Goku-Vegeta fight where he is seen launching the Kamehameha attack. Various shades of black and grey have been used along with a circular white tinge in the centre which represents the energy ball. The tattoo encases the Goku-Vegeta on the top and the bottom half of the tattoo.

For DBZ lovers who have been enacting the energy move their entire childhood, this is your time to get this Goku arm tattoo.

Nothing can be more adorable than a kid Goku black tattoo on your calf muscles. The initial stages of Goku’s growth from a child to be an able fighter is very short-lived in DBZ. A Goku tattoo can easily encapsulate that memory for DBZ lovers.

This tattoo comprises both the Dragon balls and Goku with the massive shaped Shenron dragon approaching from behind. A simple yet detailed design done with black borders includes all the seven dragon balls which remains the focal point of the DBZ show.

The fanatics of the Dragon Ball Z series who would love to have tattoo sleeves must get this Goku tattoo inked on their arm. However, the artist has used his creative liberty to ink this DBZ tattoo. The style of Goku’s hair and face structure has been slightly shifted from what it appears in the show. The blue coloured background and borders on the hair and face of the tattoo give it a different appeal than the rest.

A Last Supper themed Goku tattoo includes all the major characters of DBZ and is very unlike other inking ideas. Starting from Piccolo, Krillin, Bulma, Master Roshi and our favourite Goku dressed as Jesus everyone up on the side of the table. This huge chest tattoo inked entirely with black colour will be one of kind. On the other hand, the menu on the table has Dragon Balls, ramen noodles and other DBZ props instead of actual food items. For catholic people who adore both Jesus and Goku, this is a great way to gloat your love for the series. An innovative idea like this should not keep you waiting, go ink your chest now!

People who have grown up watching DBZ, I’m sure you cannot get enough of the linking up of the fearless Goku and Vegeta. It has so happened that while Goku is about to throw his energy ball, Vegeta has been unmoved by the Super Saiyan’s wrath. Ironically both of them have enjoyed themselves being friends and rivals. Although there has always been a deep-lying undercurrent between the two, both Goku and Vegeta have learnt a lot being in each other’s company. This tattoo here is a tribute to the bond as tough as this. The upper half of the tattoo bordered in black has Goku’s furious eyes looking down upon Vegeta who is encroaching towards his opponent.

Awesome Goku Tattoo with Kame House In The Background

The Kame House of Master Roshi takes you back to the early stages of the show. A way to preserve this fond memory of your favourite Gohan, Master Roshi, Bulma, Piccolo, Krillin enjoying in Kame House, would be to ink it on your hand. A DBZ tattoo like this will be more original than the other ideas. This DBZ tattoo features a small Goku chasing a Dragonball on his nimbus with the island at the back of it. Inked using several colours, the sky behind Kame House, flying Nimbus and Goku’s lively face is an absolute joy to watch.

Having said all that, there are various other Dragon Ball tattoo ideas for you to explore,