10 Best Goddess Tattoo Ideas You Have To See To Believe! 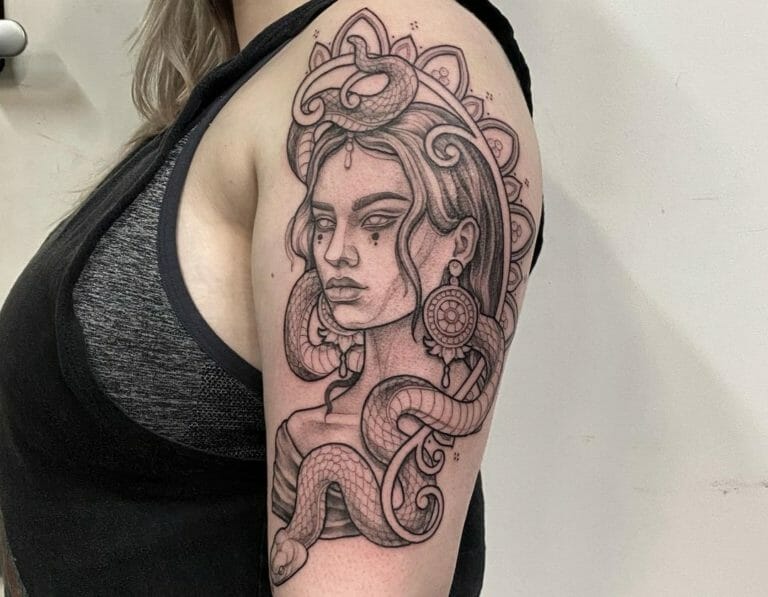 Gods and Goddesses tattoos are trending for both men and women. If you’re looking for some of the most amazing goddess tattoo ideas, we’ve got you covered.

Goddess is a female celestial body that is associated with different virtues.

According to Mythology, each goddess is an embodiment of a particular virtue. Fertility, creativity, sexuality, motherhood, love, and sexuality are the different virtues that a goddess can be linked to.

Regardless of the culture, mythological concepts have always served as excellent portrayal of the lives of Goddesses and Gods encompassed by spiritual elements and events that transcend the boundaries set by reality. These ancient mythologies have developed such a powerful religious base that being able to relate to them has become a challenge in the present times. People get goddess tattoos mainly because of the virtue they carry. So, if you are looking for a suitable goddess tattoo design, you can consider the options enlisted below.

The triple goddess moon sign is also known as triple goddess symbol. It is depicted by two crescent moons surrounding a full moon. The symbol, on its left shows a growing moon, the center presents a full moon and the right side shows a dwindling moon. This symbol shows how the moon keeps changing its phases as a correspondence to the different phases of womanhood. It is also considered as a symbol of the never-ending cycle of birth, life, death and rebirth. The moon can be visualized as symbol of the triple goddess and three stages of a woman’s life namely, the Maiden, the Mother and the Crone.

The above mentioned Instagram image shows a beautifully inked triple moon goddess tattoo in black. The butterfly in the tattoo makes it a great tattoo that shows transformation. What makes this tattoo look even more eccentric is the mandala drawn within the ful moon which lies in between the crescent moons.

Athena is a Greek goddess representing virtues like inspiration, wisdom, strategic warfare, law and justice, strategy, skill, crafts inspiration, courage and civilization. She is well known for her warfare strategies and is oftentimes pictured as a counterpart of heroes. She is also the leading goddess of heroic power. Just like Poseidon tattoos, Athena tattoos are immensely popular amongst goddess tattoo designs. These tattoos symbolize war, peace and wisdom. There are many unique and creative designs of Athena tattoo that you can get inked on your sleeve.

The tattoo above shows Athena as a statue but it evokes respect. It is drawn entirely in black with no hint of any other color. The outlines are very neat and precise with a little bit of shading in between. Goddess Athena can be seen with her very own bird, the owl sitting on her shoulder.

Kali is a goddess of Indian Mythology and she is considered as an evil celestial body. Goddess Kali is a representation of ferociousness. As per the Hindu Mythology, she is considered as universal mother. The visual depiction of this goddess includes skulls, heads and knives, which is the reason why she is mostly seen as grotesque. People worship her for her ferocity and bravery for destroying the sinful forces. Her symbols include skulls, swords, bones and blood.

This shows a traditional tattoo of the Indian Goddess, Kali in black and grey colors. She can be seen wearing a necklace made up of skulls and also has a Halo around her head. In this tattoo, Kali the goddess can be seen in her own element with her tongue protruding outwards. It can a great tattoo as a feminist icon.

Artemis is the Greek Goddess of wilderness and hunt, she is mostly categorized in the Greek Mythology as one amongst the celibate deities, who is unmarried and doesn’t have any association with man. She is an embodiment of self-sufficiency and independence. She is also portrayed as an audacious and dauntless female character who is free spirited on one hand but also caring and compassionate on the other. She is known as the moon goddess and hunter, her prime symbols include arrow, bow and moon. She is often seen with animals like birds, stags, dogs, and horses and is known to be a lover of nature.

A unique tattoo can feature Artemis in her own naturalistic element. It is a dot-work tattoo which is drawn with very fine lines. It also includes a tender fawn which justifies the fact that Artemis was a nature lover.

A tattoo related to Greek Mythology can present stories that were narrated for many generations and can also be used for labeling eminent figures in literary society. Greek tattoos mostly consist of an image of one or more deities in a portrait style. Greek Mythology Tattoos can either be a representation of any particular deity and everything that comes along or the background image to depiction a historic mythological story. These tattoos are mostly done using black colored ink bt you can also use creative colours. You can go for a beautiful Persephone tattoo. A Persephone tattoo is a great way to show how beautiful a tattoo can be. With the right colours, you can make a great tattoo which you can place on a visible place like the shoulder. It is a vibrant tattoo with shades of pink with a lot of emotions present on the face. It can be preferably drawn as an arm tattoo because of its structure and size.

Nyx was the Goddess who represents night and she was even feared by Zeus- the God of thunder and sky. Goddess Nyx, the child of Chaos lived in the abyss of the underworld. In Greek art, she is portrayed with wings and a crown, and is mostly epitomized as a nice-looking woman.

The tattoo of Nyx who is associated with dark elements. She is known to being death and sleep to the humans on earth. This tattoo is a superb blend of bright colors like nocturnal elements like the moon and the use of black to make the tattoo look more shadowy. Since Nyx is the goddess of night, she is also associated with the moon which can also be seen in this tattoo. This tattoo has been drawn on the skin of the thigh. One can also get it done on their chest or back.

The one shown here is a unique tattoo piece that can be distinguished from the rest very easily. This tattoo is a small, dainty tattoo presented in a form of a statue which can be suit you if you are looking for a minimalist tattoo with meanings. It gives a serene look and is great for history nerds. One can get this tattoo drawn near the ankle, forearm, neck or collarbone.

Earlier, Aztec Tattoos were done to show honor to an Aztec God. Later on, they started to be used as a way to distinguish warriors from common tribe members. Presently, these tattoos can be seen in a wide variety of styles as they represent different characters from the pictorial culture of the Aztec civilization. Some common forms of an Aztec tattoo include Aztec eagle, Aztec serpent, Aztec sun, Aztec warrior, Aztec calendar and Aztec Crocodile.

The tattoo which can be seen in this image is of an Aztec Goddess who is bold and fearless. She can be seen appearing from the wide open mouth of a ferocious lion who is wearing a king like crown. The goddess can be seen having two parallel marks on her nose which symbolize her valor and confidence. Best places to get this tattoo done are the arm, chest or back.

As per African Mythology, different African gods and Goddesses carry different meanings. Some of them are Nana Buluku, Mawu, Gleti and many others. Initially, these tattoos were drawn as a part of any ritual or to pay honour to any African god or goddess. One can choose any African Goddess they like as per their virtue and get the tattoo accordingly.

This tattoo shows a bold African queen who is a rebel. It is a black, shaded work with very fine and accurate detailing. It can look really good on people with the right blend of colours. According to the size of the tattoo, one can get it done on the chest, back or thigh.

The Egyptians consider Isis as the goddess of wisdom, motherhood and health. She represents the principal defender of the country. As the leader of nature, she had many extraordinary potentials like healing ability and resurrection power portrayed by Isis. Mainly, she is symbolized with cobras, scorpions, spreading wings, and full moon. This tattoo can be the best choice for those who don’t give up on anything easily and are always in search of a solution.

This tattoo features Isis as she sits in a cross-legged posture with her wings spread apart. It is a dot-work tattoo with very minute details. It is completely black with no other color added. In the picture, this tattoo has been drawn the upper region of the back and that is the best place to get it inked because of its width.

Few more goddess tattoo ideas that might grab your attention are: