10 Best Ghostface Tattoo Ideas You Have To See To Believe! 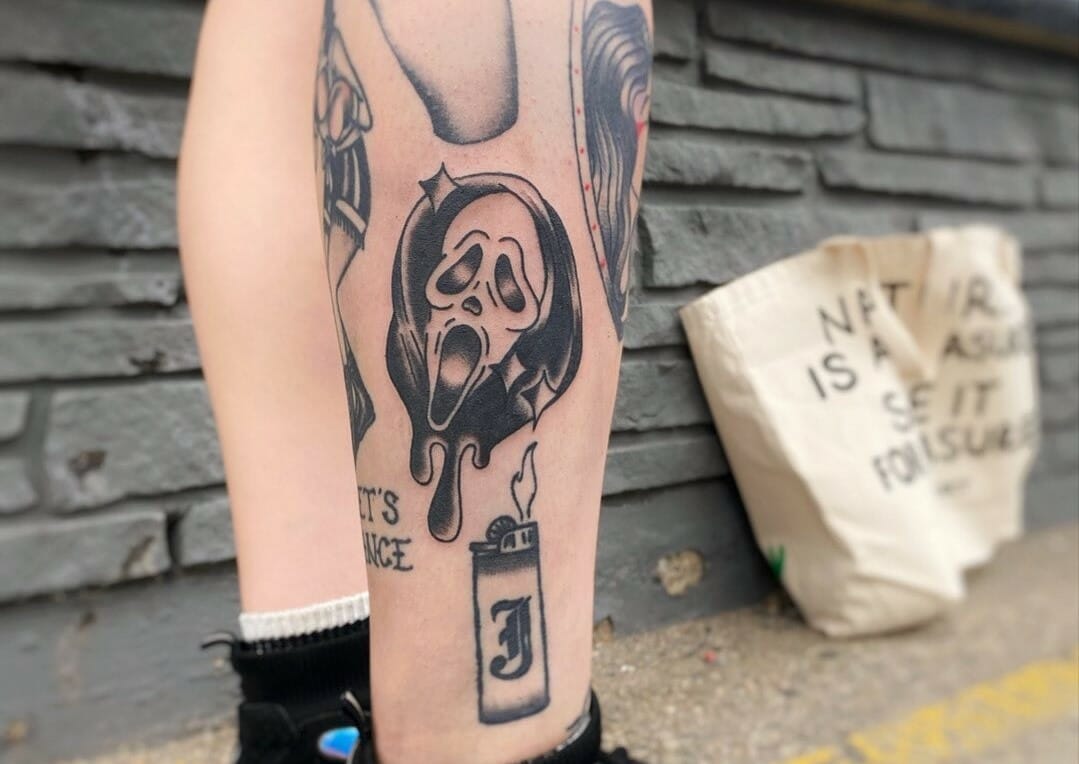 Looking for a tattoo that is funny, scary, quirky, and wacky all at once? Then here are some Ghostface tattoos for you to check out!

The Ghostface is a fictional identity that is a part of the ‘Scream’ movie franchise universe.

The Ghostface is a highly recognisable feature in American horror movie genre. It is usually seen wearing a hooded black cloak along with a distorted white mask.

In addition to wearing a hooded black cloak and the bizarre white mask, Ghostface also carries a jagged knife with which it hunts down its prey. The identity of Ghostface never remains the same in each ‘Scream’ movie but changes based on the plot of the ‘Scream’ movies. The character never speaks in person but uses a voice changer to communicate threats over the phone.

Consequently, if you are a big fan of the ‘Scream’ movies no matter how childish or bizarre the plots may be, you may want your ‘Scream’ tattoo to pay homage to the most recognisable character from the series.

Classic Ghostface Tattoos With A Knife

The figure of the Ghostface is extremely popular through out the world. Most of the jumpscare moments in the ‘Scream’ movies happened when the victims would suddenly come face to face with the Ghostface who would attack them with a knife. The victims would often try to fight their way to escape but would rarely be successful. Therefore, if you want to get a tattoo of a classic image from the ‘Scream’ movies, then you need to ask your tattoo artist for the classic Ghostface ‘Scream’ tattoo.

For more dark and edgy tattoos related to popular culture, check out these awesome Edward Scissorhands tattoo designs for some spooky inspiration!

The Ghostface might be scary to some but to some other horror movie fans, it is also a hilarious character. More often than not, this character fails to be sinister but just plain annoying. Thus, you can always play around with the Ghostface identity and make a unique design that is just as quirky and funny as you.

As seen in this picture, the wearer has made the Ghostface a softie who is seen to be looking for love and appreciation rather than in his usual murderous rage.

If you think the Ghostface tattoo is looking quite incomplete and unfinished, you can always add flowers or floral motifs to the tattoo! After all, flowers also elevate the beauty of the tattoo. Consequently, you can ask your tattoo artist to make smaller surrounding tattoos of flowers you like a lot. Some might think that floral motifs will not suit the overall theme but it may also bring a fresh twist to the Ghostface traditional tattoo.

If you like to watch horror movies a lot, you will know that they all have similar motifs and plots. There will be murders by an evil spirit, sharp weapons and plenty of spooky symbols like spider webs and creepy crawlies. If you want your tattoo to represent the most basic and significant aspects of any horror movie, then you can get a Ghostface tattoo from the ‘Scream’ franchise. You can also add other symbols like spider webs and more to your horror movie tattoos to give them a more universal appeal.

No horror or slasher film will be complete without a huge amount of blood spilling and dismembered bodies. If you are a fan of the ‘Scream’ movies, you will remember how Ghostface’s knife often dripped blood to show its previous victims. So if you want a truly authentic ghost tattoo that shows the messy, bloody side of these movies, you may create a tattoo design with Ghostface and his bloody knife.

If you are not scared to experiment with your tattoo and are fine with a little bit of absurdity, then you can get a creepy but cute Ghostface tattoo with heart symbols! Over the years, a lot of artists have parodied the character and made cute and clever puns with it that expresses love or romantic ideas. You may also do the same and add cute red coloured hearts to your tattoo.

The Ghostface is not a character in itself but an identity that the killers in each ‘Scream’ movie takes up before they embark on a killing spree. This shows that the Ghostface is just a mask which the human characters wear. Subsequently, if you want your Ghostface tattoo to have a unique twist, you can take inspiration from the picture above. In the tattoo, the wearer has artfully shown how there was always a human behind the Ghostface mask.

Ghostface Tattoo Designs For Fans Of The ‘Scream’ Movies

In the above picture, the tattoo artist has created a hilarious and unique Ghostface phone tattoo. This tattoo design reflects the plot in the ‘Scream’ movies where Ghostface would often call up their victims and talk to them to let them know it was coming to get them. The cute pink coloured flip phone is also an authentic sign of the 1990s era when the ‘Scream’ movies were first released. In the tattoo, the small knife hanging from the phone is also a clever allusion to the ‘Scream’ franchise and Ghostface.

If you are a fan of other cult horror movies as well, check out these crazy Evil Dead tattoo designs!

Ideas For Ghostface Tattoos That Are Easy To Place Anywhere

It is actually quite easy to place your Ghostface tattoos anywhere on your body depending upon the kind of design you like for your tattoo. If the design can be accommodated in a smaller tattoo, then you can place it on your calves or even near your ankle as seen in the picture. In addition to that, a lot of people have also placed their Ghostface ‘Scream’ tattoos on their thighs, biceps, or near their wrists.

You can also place the tattoo on your shoulder or near your chest if it is a smaller tattoo design. Placing it on the more common spots of your body will also ensure maximum visibility.

Horror movies have become a lot scarier over the years due to better movie production and camera shooting techniques. However, a lot of us are still fond of silly slasher movies like the ‘Scream’ franchise because of how we grew up watching these movies. The plots were a bit odd and funny but it was entertaining nonetheless. Therefore, if the ‘Scream’ movies and the Ghostface made you a fan of horror movies for life, then you should definitely get an amazing Ghostface tattoo!