10 Best Ghost Rider Tattoo Ideas You Have To See To Believe! 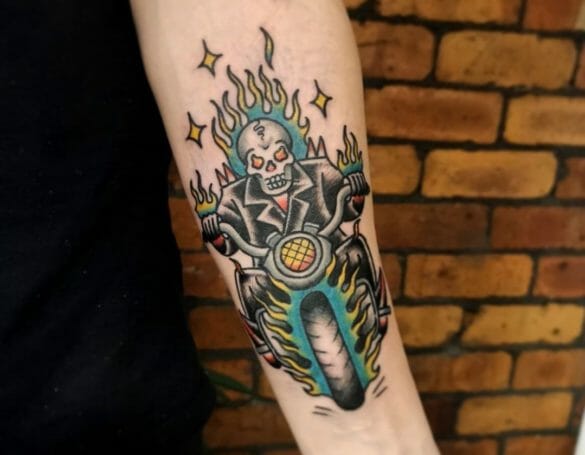 Looking for the most famous anti-hero and superhero in the Marvel Comics universe? Then here are some amazing Ghost Rider tattoo ideas for you to check out.

Ghost Rider is a fictional character who is a part of Marvel comics.

Created by Roy Thomas, Gary Friedrich and Mike Ploog, the mantle of the Ghost Rider has been taken up by many people. The most notable Ghost Riders have been Johnny Blaze, Danny Keys and Robbie Reyes along with Carter Slade and Alejandra Jones.

The first Ghost Rider was Johnny Blaze who struck a deal with Satan in order to save his father from death. However, he was not aware that Satan was actually a Marvel villain named Mephisto. At night, Blaze would find that his body would be consumed by hellfire, reducing him to a mere skeleton. His head would then be replaced by a flaming skull. Riding a motorcycle, Johnny Blaze would become the Ghost Rider with amazing abilities to shoot hellfire from his hands.

After Johnny Blaze, Danny Ketch became the second Ghost Rider. After his sister was injured by Japanese gangsters, Ketch came across a supernatural motorcycle which contained the Spirit of Vengeance. After Ketch, Robbie Reyes became the next Ghost Rider with Gabriel Luna portraying him in the TV show named ‘Agents of S.H.I.E.L.D’ based on various Marvel comic characters.

The Ghost Rider was also adapted into a movie in 2007 with Nicolas Cage playing the character of Johnny Blaze. A sequel of the movie named ‘Ghost Rider: Spirit of Vengeance’ was also released in 2012. One of the most awesome things about the character is that he is supernatural and mystic in nature as compared to the other Marvel heroes like Captain America and Iron Man who use physical, bodily powers to fight and defend. The Ghost Rider is also alternately a superhero or a villain depending on his or her motivation and story arc.

The image of Ghost Rider is pretty iconic. After all, who can forget the image of a skeleton who rides a back and the head is surrounded by flames? From the time of the creation of the character, the Ghost Rider has played an important role in different comicbooks. Along with being the protagonist of their own stories, the Ghost Riders have also faced powerful superheroes like Doctor Strange and Spiderman.

Out of all the Marvel Comics superheroes, if you like Ghost Rider a lot, you can definitely get a simple Ghost Rider tattoo.

As seen in the picture, the tattoo artist has done an amazing job of creating a Ghost Rider tattoo with clean strokes that does not look too cluttered or messy. If you are getting a tattoo for the first time and do not have much experience with needles yet, you can ask your tattoo artist for a minimal design.

If you go through any Marvel comic book with the character of Ghost Rider, you will immediately notice the beautiful and colourful artwork by the artists. Since the Ghost Rider’s skull is always surrounded by hellfire, the comics are very vivid with a lot of yellow, orange and red colours. These colours also stand out a lot in contrast to the black blazer and jeans that the Ghost Rider mostly wears along with his jet black motorcycle.

If you want your Ghost Rider tattoo to be different and unique as opposed to drab and monochromatic, you should ask your artist to add multiple colours to the tattoo. This will make your tattoo much better and eye-catching even from a distance.

The artwork of the Ghost Rider comics are pretty detailed and nuanced. In addition to that, the movies are also very visceral and colourful and the CGI effects were quite advanced with respect to the time it was first made in.

You can take some inspiration from the tattoo in the above picture in order to create a Ghost Rider tattoo that is very detailed and realistic. As seen in the picture, the fire surrounding the skull of the tattoo has almost blended in with the skin complexion of the wearer creating a natural looking effect.

If you are looking for some more comic book tattoo ideas, check out these wonderful Marvel tattoo ideas to know how you can make tattoos out of your other favourite superheroes and villains.

Great Ideas For Ghost Rider Tattoos With His Flaming Bike

For Danny or Daniel Ketch, the Ghost Rider motorcycle becomes the most important part of his story into becoming the Ghost Rider. His story is also quite traumatic as he finds the mysterious motorcycle one day as he and his sister are attacked by ninjas in New York. Once he touches the sigil on the motorcycle, he finds himself being converted to the supernatural being known as the Ghost Rider. Throughout his life, he also gained numerous villains like Zarathros who swore to destroy him and his motorcycle which contained the Spirit of Vengeance. Consequently, if you are a true Ghost Rider fan, you will know how important his motorcycle is to his story. Therefore, you can also get a tattoo that pays tribute to the iconic flaming motorcycle that helps the Ghost Rider deliver justice but also create mayhem throughout.

If you want a slightly unconventional tattoo, you can also check out some Ghost Rider horse tattoo designs on the internet.

A lot of people prefer to get the Ghost Rider tattoo traditional while some prefer to experiment with their tattoos and are ready to take more risks.

The Ghost Rider belongs to the extensive world of Marvel comics and now, Marvel Cinematic Universe. Over the years, there have been some really popular superheroes from this franchise including Spiderman, Captain America, Iron Man and Doctor Strange. The anti-heroes and villains from this franchise are also quite popular including Venom, Ultron, Thanos or Loki. Thus, if you are a huge fan of the comics or movies and love to watch your favourite movies again and again, you may want to get a great Ghost Rider tattoo that also combines other symbols of the comics or films.

If you draw inspiration from the tattoo in the picture above, you can also include other Marvel characters like Frank Castle or Deadpool as the wearer has done. The tattoo with a random assortment of anti-heroes may look bizarre but a true Marvel fan will recognise them and understand that you are a big fan of the comics and movies as well.

Awesome Ghost Rider Tattoo Designs To Place On The Back

A Ghost Rider tattoo can be quite expansive and wide depending on the kind of design you choose. Normally, tattoo artists prefer a large space to do the entire tattoo as they can properly draw out the character along with his motorcycle. Consequently, if you are looking for a gorgeous comics tattoo that will cover your entire back, you can ask for a Ghost Rider tattoo. You can keep it empty as seen in the picture above or you can also get it filled in with a variety of bright colours. If you are feeling particularly adventurous, you can also drag up the tattoo to set it on your neck and create the perfect Ghost Rider neck tattoo.

A lot of experienced tattoo lovers like the idea of covering up their entire body with tattoos. As a result, they get tattoos on different parts of their body and try to cover it up entirely with smaller designs or a large inter-connected one.

While most people prefer small wrist tattoos on their hand, you can also get a hand tattoo that acts like a glove tattoo for your hand. As seen in the picture, the wearer has gotten a unique Ghost Rider tattoo on the upper side of their palm which almost looks like an ornament or a glove. This tattoo around their hand will not be very easy to hide and it will definitely be quite eye-catching to people everywhere you go. If you are looking for more unconventional Ghost Rider tattoo ideas, you can also search for Cowboy Ghost Rider tattoo designs.

Any good fan of Marvel comics would know about the unique drawing and etching style of the artists very well. Often, people can distinguish the artist of an edition just by looking at the style of art and the number of unique marks that the artist leaves on their work.

Thus, if you find the artwork to be quite beautiful, you can use it as inspiration for your own Ghost Rider tattoo.

If you do not have any concrete ideas regarding the tattoo in your head, you can also give the responsibility to your tattoo artist and let them work their magic on making the perfect design for you. The entire process may take a lot of time but you will find that the ultimate result will be quite worth it. You can get these tattoos on top of your back, arm, chest, shoulder or even on top of your thighs.

If you prefer the look of the character in the movie series more, you can also search about the best Nicolas Cage Ghost Rider tattoos that you would love to get.

Incredible Ideas For Ghost Rider Tattoo Sleeve On Your Arm

If you are a seasoned tattoo lover with a lot of experience, you might be looking for new tattoos for other parts of your body. The sleeve tattoo is quite popular among many people even though it takes a lot of time to complete. Sleeve tattoos offer maximum visibility but are also easy to hide if you wear appropriate clothes. If you want to ensure that your comic book sleeve tattoo looks even better, you should check out some amazing Ghost Rider sleeve tattoo ideas on the internet.

The skull of the Ghost Rider is the most stunning and visually arresting part of the character. If any villain saw a skull surrounded by flames riding towards them on a motorcycle, they would know that they have very little time left on earth. The flaming skull would mean that the Ghost Rider was coming for them and would destroy them pretty soon.

Consequently, if you really mean to pay homage to the iconic Ghost Rider character through your new tattoo, you should make a Ghost Rider skull tattoo on top of your hand, chest, shoulder or even back.

You will find that a lot people are huge fans of the Ghost Rider comics as a teenager or as an adult. They may also be a fan of the movie series and liked Nicolas Cage’s portrayal of the complex character who struggles with his newfound power to becoming a superhero who is incredibly powerful. In addition to that, the art of the Ghost Rider comics and movies is also pretty spectacular. Thus, if you think that you appreciate the comics, movies or character a lot, go ahead and get a Ghost Rider tattoo of your own!