10 Best Geometric Space Tattoo Ideas That Will Blow Your Mind! 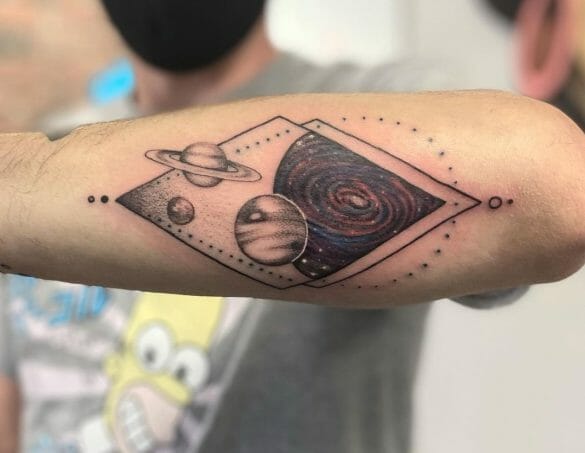 Geometric tattoos have been growing in popularity for the past few years.

Both space tattoos and geometric tattoos are unique in nature. And so, what could be better than incorporating geometric designs into a space tattoo?

Geometric tattoos are those made up of geometric shapes, fine lines and dots. Geometric tattoos can be anything from intricate abstract tattoos to simple and tiny minimalist ones. They can consist of nothing but geometric patterns or a central object augmented by geometric shapes. Tattoos inspired by sacred geometry are believed to be highly symbolic. A geometric tattoo has a deeper meaning that expands beyond the aesthetics of the tattoo. Geometric tattoo designs are said to be the ones that connect with nature and the universe. Some common shapes used to ink a geometric tattoo are circles, cubes, triangles, rhombuses, pentagons and hexagons. A traditional mandala themed geometric tattoo is also a popular choice. And each geometric shape in a tattoo represents different things. For example, circles in a tattoo represent relationships, while squares represent stability. However, geometric tattoos in general stand for equilibrium, symmetry, mystery and much more. But in the end, the symbolism and meaning a geometric tattoo holds depend on its wearer. Geometric tattoos have their origin in ancient times, while space tattoos are relatively new. And when we incorporate geometric designs into a space tattoo, we get something brand new and cool enough to turn heads. Be it for one’s aim to reach the stars or the beauty of it; space tattoos are the new shizz. A space tattoo can be anything from a tattoo that showcases how space looks from Earth or a basic tattoo consisting of stars, planets and/or galaxies. Tattoos portraying space can be a great option for those who have an adventurous soul and love exploring. Sometimes it could represent childhood memories since all of us, at some point, has dreamt of becoming an astronaut. Those who are into mysterious things and fantasy can get a space tattoo since space is all about infinite things yet to be discovered and understood. Other kinds of space tattoos include constellation tattoos that have deep symbolism attached to them. And if you want something abstract, you can totally create a space tattoo of your own without having to think of the real alignment of the stars and planets. Different elements found in the space incorporated in a tattoo are a symbol of dreams, hope, mystery, optimism, eternity and the infinite circle of life and death. And everything from a tiny tattoo showcasing the planets to a huge one presenting an entire view of the space is a good choice of tattoos for guys who want it just for the symbolism. Different geometric tattoos with a picture of space in them have different meanings that vary depending on the owner of the tattoo. Geometric space tattoos come in all shapes and sizes and can be placed anywhere you want on your body according to your taste. So if you are in search of one for your sleeve or calf, your search ends here, ’cause we have got you covered with 10 unbelievable space tattoos that are geometric.

This tattoo features three rhombuses with a photo of space in them. The picture looks like an image of a galaxy and stars seen from a planet that is not Earth. The tattoo represents the fact that the owner of the tattoo is into things that are unknown and questions that are unanswered. The usage of dots and fine lines makes this tattoo a beautiful piece of art that is intricate and aesthetically pleasing at the same time. All you need to do to get this tattoo inked is find a tattoo artist you can trust and go for it.

This tattoo can be considered to be a sacred geometry tattoo since the patterns used in this tattoo are hexagons. And hexagon is found in nature in the shape of a honeycomb. This tattoo portrays a part of Saturn and space in a random shape. The uses of blue, purple, yellow and black ink are what make the tattoo a majestic one. Side tattoos are usually very painful to get since the skin around the rib cage is pretty thin and has the least amount of fat underneath. But we can blindly tell you; the results will be worth the pain.

This tattoo showcases the 9 planets of the solar system. It features Mercury, Venus, Earth, Mars, Jupiter, Saturn, Uranus, Neptune and Pluto (from top to bottom). Even though the comparative sizes of the planets are not really accurate, this tattoo is still a mesmerising one. And the incorporation of circles, rhombuses and arrows make this piece an appealing geometric tattoo. You could get this one done anywhere on your body if it is resized. You could totally wear it on your sleeve or calf to upgrade your appearance. With an artist who has adequate experience, you’ll be good to go.

The tattoo we are looking at is an abstract artwork too dope not to consider getting inked. It features various structures found in different elements of outer space. This fine line tattoo showcases planets and different geometric shapes. The squares, circles and triangles, though not easily distinguishable, are what help this tattoo be a concept to think about. It is gonna be difficult for your artist to ink this one, but if he or she can get it right and clean, we promise you that this tattoo is gonna stick out in a crowd full of other geometric space tattoos.

This particular forearm tattoo right here is an astonishing piece that you should consider getting if you are looking for a colour tattoo and something unique. It seems like the colours of the space inside the pentagon is leaking through a gap in this tattoo. The usage of white, blue and purple ink is pretty slick in this one. And that touch of yellow and green ink under the bigger pentagon gives this tattoo an interesting effect too good not to notice. So if you are sure about this one, with a good artist, you’ll be all set for it.

Among other geometric tattoos, triangular ones are quite a popular choice. And this triangular space tattoo features four triangles put together into a bigger one. Each triangle has a different combination of colours that make up the space-like images. The blue, red and yellow colours are the ones dominating this tattoo. And we can also spot a name with each of its letters written inside each smaller triangle. You can choose your own word or name or can completely omit the letters if you want. So wait no more and get this one done as soon as you can.

The tattoo you see here is mostly all about cubes. This tattoo presents hollow cubes, two-dimensional cubes, hexagons and circular lines. But what makes this tattoo dreamlike is the image of space. The shades of blue, black and purple give this tattoo a dynamic look. The tattoo is so complex that you would definitely need a skilled artist for this one.

With some planning prior to the tattooing, some attention from your artist during the inking and some care from your end during the healing process, you can undoubtedly rock this tattoo. So decide the placement and get on it.

The lunar phases, also known as the moon phases, are the shapes of the moon’s directly sunlit portions as seen from Earth. And this tattoo features all the phases (except the new moon) we see of the moon. It showcases a full moon, two gibbous moons, two quarter-moons and one crescent moon on one end and another on the other end. The additional shapes like the rhombuses and circles are what makes this tattoo complete. If you have some money to spend and the ability of enduring pain and be patient throughout the inking, this would really be a great choice.

The Star And Its Planets Geometric Tattoo

Have you ever considered the fact that there could be other gravitationally bound systems with a star and planets orbiting it just like the solar system? There could be other life forms whom we call aliens. This geometric space tattoo features a solar system that could exist in an alternate or parallel universe. But unlike the real solar system, this tattoo features a star that has six planets surrounding it. The various shapes in this tattoo make this a unique geometric tattoo. And if you like fantasising about outer space, you must trust us and go for this one.

This tattoo is all about science and fantasy. The geometric patterns used in this tattoo look somewhat like a circuit used in a machine. The dominance of rhombuses, hexagons, circles and straight lines is pretty evident in this one. We can also see the brilliant use of the shades of one particular colour, which is blue. And the shapes are beautifully drawn using white ink. This tattoo would look good anywhere on your body, but since the length of the tattoo is greater than its breadth, getting this one inked on your arm or leg would be the best option.

There could be many reasons for someone to get a space body art inked on themselves. Whether you aspire to be an astronaut or aim for the stars in the truest sense of the phrase, a space tattoo would always be a cool option. Not only because of its beauty but also because it serves as an inspiration, space tattoos are quite in-demand nowadays. We believe that you have wrapped your head around the fact that space tattoos can be of any shape, colour and size, and there are no boundaries regarding getting a space tattoo. You can get one irrespective of your age, gender and skin complexion. And we hope, going through the list of space tattoos in geometric designs has been helpful enough for you to decide what you want your geometric space emblem to look like. You can always ask your tattoo artist to customise or create a unique design for yourself. But before you fixate on one particular tattoo, consider every aspect, and carefully choose the tattoo that best suits your persona as it is gonna stay on your skin for the rest of your life (if you do not get it removed, which is a difficult thing to do). Having said that, if you are still not able to make up your mind, here are some suggestions for space-themed geometric tattoo ideas you might want to look up on the internet and consider getting inked: