101 Best Gears Of War Tattoo Ideas You Have To See To Believe! 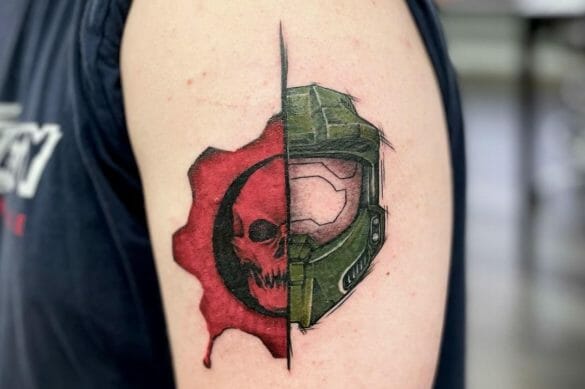 Are you a video games enthusiast looking for the perfect tattoo? Then here are some amazing ‘Gears of War’ tattoo designs for you to check out!

‘Gears of War’ is a series of third-person shooting video games owned and published by the Xbox Game Studios.

Over the years, the popularity of ‘Gears of War’ video games have led to the emergence of several spin-off media forms. Consequently, a comic book series, novels, board games as well as various other merchandise has also been released based on the same premise as that of the video game.

The ‘Gears of War’ is set in the fictionalized universe of Sera where skilled human fighters have to engage in battle with the Locust Horde. The Locust Horde represents a group of reptile-like creatures who want to destroy humanity. The protagonist of the original trilogy was Marcus Fennix, a soldier who was tasked with the work of fighting the Locust Horde. The spin-off video games and other art forms also featured other characters like Damon Baird and Kait Diaz.

This series has been applauded by critics because of its detailed graphic designing and unique storylines. If you are a fan of this series, you should also choose a ‘Gears of War’ tattoo!

If you are looking for some more inspiration related to video game tattoos, check out the best Video Game tattoo ideas right here!

If you have decided to put a ‘Gears’ tattoo on your arm, then you should look into the best tattoo sleeve designs for your arm After all, tattoo sleeves are quite popular among tattoo lovers because of how they can be easily seen and appreciated from afar. You can also ask your tattoo artist to create a personalised ‘Gears of War’ cog tattoo design just for you so you can easily set it on your forearm.

Awesome Ideas For ‘Gears Of War’ Tattoos With Weapons

The ‘Gears of War’ is an amazing video game for every video game enthusiast who likes third-person shooting games. Being able to kill members of the Locust Horde actually takes a lot of effort, skill and patience that very few players can acquire over the years. In addition to that, the variety of weapons provided to the player also makes these games a favourite among many people. As weapons and other tactical gear are such a huge part of the video game, you can also choose a personalised ‘Gears of War’ cog tattoo for yourself to be more authentic.

The actual video games are quite bleak and dark looking because of the crisis that Sera is going through. Most of the main characters wear tactical gear that helps them to camouflage easily and fight with the Locust Horde. However, your tattoo can definitely be as bright and colourful as you want to be. As seen in the picture, the addition of colour is elevating the beauty of the tattoo in a way that everyone will admire it from afar.

A lot of people often struggle with getting specific tattoos because they don’t know where to place it. After all, you don’t want your tattoos to look disjointed and hurriedly placed without any meaning. However, you will definitely not face this problem if you opt for a ‘Gears of War’ tattoo design. These tattoos can be easily placed anywhere, whether it is on your foot, arm, shoulder, chest, or back.

Marcus Fenix is the protagonist of the original video game trilogy. A hallowed military officer, Marcus was put in jail because of his failure to rescue his father during an important mission. However, the Coalition government brings him out of jail to join the army that is sent to fight the Horde. Marcus has been adjudged to be one of the greatest heroes in video games. People have also related with his emotional development over the progress of the games. Consequently, if you feel a deep connection with Marcus’s character, you can easily opt for a tattoo with his face on it.

‘Gears Of War’ Tattoos That Are Perfect For Your Biceps

A lot of guys love to get tattoos on their biceps. Firstly, the bicep offers a lot of space to properly display the design. In addition to that, it also offers maximum visibility. Consequently, if you are looking for video game ink ideas for your bicep, you can check out ‘Gears of War’ tattoo designs for men.

Unconventional ‘Gears Of War’ Tattoo Designs With The Locust Horde

The Locust Horde are known for being bizarre half-human, half-reptile creatures who also have amazing fighting strength. The main goal of the protagonists in the ‘Gears of War’ is to destroy these creatures.

When people look for video game ink ideas, they don’t often look at video game ink ideas with the antagonist or villains of the story. However, if you don’t mind being experimental and taking some risks, you can also get unique ‘Gears of War’ tattoo with the Locust Horde.

If you are also looking for tattoos from other popular video games, check out the best Doom tattoo designs in this article.

Detailed And Elaborate ‘Gears Of War’ Tattoo Designs For Men

If you are looking for complex and detailed video game ink ideas, then you should check out the picture above. The wearer has created an amazing tattoo design for their chest with the characters from the ‘Gears of War’ with the skull logo in the middle. The tattoo artist has done an incredible job of making the characters look extremely life-like and realistic. The red coloured skull is making the tattoo look more attractive.

Unique ‘Gears Of War’ Tattoos To Place On Your Back

As seen in the picture, the ‘Gears of War’ tattoo on the wearer’s back is looking quite amazing. Even though the design consists of two bloody guns pointing at each other, it is still an impressive work of art. If you are looking for simple but stunning tattoos for your back, you should definitely take inspiration from this piece of art.

People often get tattoos of something that they love a lot. Getting a personalised tattoo based on that thing is a nice way to express your admiration and appreciation for it. Therefore, if you are a die-hard gamer and really enjoy immersing yourself in the ‘Gears of War’ universe, you should go ahead and get an awesome tattoo!

What is the meaning behind the Gears of War tattoo?

The Gears of War tattoo is a symbol of courage and strength. It represents the commitment to never give up in the face of adversity, as well as resilience in the face of hardship and struggle. This tattoo has become a popular choice among gamers and those who follow the Gears of War video game series. The three interconnected cogwheels are believed to represent the three core aspects of the game—the campaign, multiplayer, and Horde Mode. The tattoo can also serve as a reminder to take a break from everyday life and focus on living in the moment. Ultimately, the Gears of War tattoo is about finding strength in difficult times and overcoming any obstacles that come your way.

How much does a Gears of War tattoo cost?

The cost of a Gears of War tattoo will vary depending on the size, complexity, and artist you choose. Generally speaking, small tattoos can cost anywhere from $50 to $200 while larger or more complex designs can range from $150 to up to $500. It is important to remember that the cost of a tattoo is an investment in your body, so be sure to choose an experienced artist and shop around for the best price. Additionally, make sure you understand the aftercare instructions that your artist provides in order to ensure that your tattoo remains beautiful and vibrant for years to come!

What are some of the best Gears of War tattoos?

Some of the best Gears of War tattoos feature the iconic cogwheels, which can be customized in a variety of ways. Some popular designs include adding a skull or other imagery to the center cogwheel or weaving intricate details into the design. Other ideas for customization include colors, shading, and even quotes or symbols from within the game. Ultimately, the possibilities are endless and entirely up to you to create a unique tattoo that is meaningful and personal.