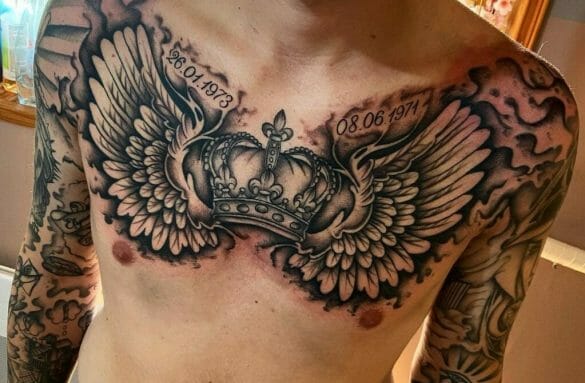 At the backdrop of a Gangster king crown tattoo, there hides innumerable strong symbolism. Read this interesting article to learn about it.

A few years back, many gangs used to look upon the king’s crown as a source of inspiration.

As a result, they tattooed the crown tattoo on their skin. The king’s crown has always allured the gangster king.

The crown represents victory, glory, and inner strength. Not only does the crown have material greatness, but powerful men have also always seen it as the supreme power.

King crown tattoos resemble honor, dignity, authority, and grace. In many cultures, the king, with the crown on his head, has been referred to as a God. As you go on to add other elements, each crown tattoo will hold different meanings and symbol.

In the present generation, by owning a crown tattoo, you might not be a king today but the crown will represent the struggles that you have conquered in the past. For many people, crown tattoos are a depiction of self-control; for some, they might own a crown tattoo merely because of the crown design.

In this given design, we come across an image of a crown tattoo with added quotes and a mustache. You will come across several royal kings and gangster king with bulky mustaches. The design of the crown is similar to the royal crowns. The quote, presented here, is self-explanatory. It was a custom for all the people present in the room to bow or kneel before the king. Although the king crown tattoo has been placed on the arm, it can be as inked as a body art tattoo as well.

Are you fascinated by this crown tattoo option? Want to learn more about it? Check out this list of crown tattoos ideas to get your next tattoo.

In the picture shown above, we see that the tattoo is drawn on the neck. The design is sleek and beautiful. Pearls are used as head adornment on the crown. Visually, the tattoo looks stunning that can be even drawn as a body art tattoo. Apart from that, such tattoos can be drawn on the chest, forearm, and even on the back side of the hips.

A strong man has always looked up to the crown since it reminds him of inner strength and his willingness to succeed in life. This crown also represent good luck. So you will come across people adorning this tattoo design on their body, either as body art or on their favorite spot.

Crowns can be in any form. Not necessarily it has to be an embodiment of sheer beauty with metal bearings. In Christian beliefs, the thorn holds a religious symbol. It symbolizes Jesus Christ’s crucifixion. In the Bible story, Jesus Christ held the thorn on his head for his ultimate sacrifice. In many Christian customs. The thorn is looked up to as a crown that Christ had put on his head on the day of the crucifixion.

In this given tattoo image, the arm tattoo shows Christ with the thorn as his crown and an image of the crucifixion underneath. The tattoo is of outstanding quality. The talented tattoo artist who has tattooed this has taken his or her own time to create such a remarkable design. This type of tattoo is also perfect for body art tattoos.

A lion tattoo resembles bravery, courage, and masculinity. Also, the lion is depicted as the king in the animal world. Similarly, a crown tattoo, as mentioned, holds great power and authorship. Thus, both the tattoo together attributes all of these. So, when a person strives to draw such a tattoo design, the meaning can be any of them or all.

Now, in this particular crown arm tattoo design, the lion has been seen with a headpiece worn and a rose. So the combination of rose and lion has a softer side. It presents an equilibrium between soft and hard, masculinity and femininity. Of course, this image is visually striking since only the eyes and the rose are given color while letting the rest of the artwork in a monochromatic form.

In the world of tattoos, everyone has their own liberty to draw their favorite tattoos on their hand. Even if the tattoo is a projection of the opposite sex, it doesn’t matter till the meaning and symbol are appropriate. Many ladies opt for a king crown and queen crown tattoo to ink on their bodies.

In this image, we see a small crown tattoo on the hand. Such tattoos look delicate and exquisite. There is minute detailing with minimal shading work done on the tattoo that looks fantastic. If you like you can also opt for a queen tattoo as well.

The manifestation of a skull tattoo is that he has the ability to conquer any situation and achieve success. When you see a tattoo bearer with the image of a skull and a crown, you should know that it means having control over your powers and that one should utilize the power carefully.

The theme of the skull and crown tattoo can be of your choice. Here, in this image, the theme is that of a fallen king and crown tattoo. The human skull is wearing it as a head crown. Such tattoos look robust yet fierce. Instead of an arm tattoo, you can go for a leg tattoo as well.

A king and queen crown tattoo shows love, respect, and loyalty. Such tattoos can be adorned as a couples tattoo or a single tattoo. For all the women out there, this is a fantastic feminine option for them to ink on their skin. Male can ink such tattoos on his skin to pay respect to the queen of his life.

In this given image, we see a couple tattoo images with the following quotes, ‘ One love, one life ‘. Both the tattoos are drawn on the arm. The crowns are clearly visible and look stunning. Tattoos such as this can be drawn on the shoulder, leg, ankle, and ring finger.

Finger tattoos are quite popular since they are easily visible to the spectator’s eyes and require less time to ink on the skin. In most cases, small tattoos are used for the finger ones.

For this one, as shown in the image, the crown is inked on the middle finger. The entire crown is drawn with blacking gray ink while the borderline has been done with white ink. It definitely gives us a vibe of the old royal times. So if you belong to the minimal tattoo coverage person, this design is for you.

Thorns tattoo have a visually striking appearance. Although a thorn tattoo is an epitome of sacrifice, however, it also means protection. When something is attached to the thorn, it protects it from the outside world.

The image presented here shows a crown, a sword, and a thorn wrapped outside it as if it is protecting them. Both the sword and the crown are associated with the king and royalty. The image is a projection of the thorn protecting the royalty.

Are you fond of all things minimal? If yes then this crown tattoo is just for you.

As you can see, this is a very humble crown tattoo with no extraordinary design. The crown is simple to outline with black ink. Often simple work attracts the audience more than a detailed artwork. It also takes less time to ink it on your skin. Instead of arms design, you can design it on the body as well.

Crown Tattoos have powerful symbolism. Their unique meaning sets them apart from the rest of the tattoo genre. Usually, men prefer this crown tattoo as a fantastic option since it represents strength, self-control, and glory. Often associated with the difficulties that a gangster king has undergone, this gangster crown tattoo embarks on the glorious journey of a gang to attain victory. This chosen design has become a popular choice for tattoo artists and admirers around the world. Be it a body art tattoo or a miniature tattoo, this has created a sensational feeling in the life of a tattoo lover.

What does a gangster king crown tattoo mean?

A gangster king crown tattoo can represent power, strength, and authority. It is also often used to symbolize loyalty and respect for a particular group or organization. Some people might get the tattoo as a reminder of their own personal struggle against adversity or they may view it as a sign of resilience in the face of danger. In some cases, the tattoo might represent a commitment to becoming the best version of oneself, regardless of how much power or money one has. No matter what meaning it holds for each individual, a gangster king crown tattoo is sure to be an eye-catching and memorable design.

What is the history of the gangster king crown tattoo?

The gangster king crown tattoo is believed to have originated in the early 1900s and has a rich cultural history. It was popular among immigrants from Italy, Portugal, and Eastern Europe who moved to the United States and brought their own unique style of tattoos with them. This type of tattoo was often seen as a symbol of power and status within the criminal underworld, though it can also represent loyalty to a particular organization or group of people. Today, the gangster king crown tattoo is still popular among those who want to show their strength and authority. It is also a symbol of resilience and determination in the face of adversity.

How do I design a gangster king crown tattoo?

When designing a gangster king crown tattoo, it’s important to consider the size, placement, and detail of the design. The crown should be centered on the body part chosen for the tattoo and emphasize its power and authority. It is usually drawn with thick lines or heavy shading to give it a bold look. For additional detail, you can add jewels or other symbols to the design. Consider adding a banner with a phrase that speaks to your personal strength and resilience, such as “Fearless” or “Unstoppable.” Finally, make sure you choose an experienced artist who can bring your vision to life.

How much does a gangster king crown tattoo cost?

The cost of a gangster king crown tattoo will vary depending on the intricacy and size of the design, as well as the location chosen for the tattoo. Generally speaking, most basic designs can range from $100 to $500 USD. For more detailed or larger tattoos, you may be looking at costs ranging from $500 to $1,000 USD. Additionally, it is important to keep in mind that the cost of a gangster king crown tattoo may also depend on your artist’s experience level and their portfolio. Therefore, make sure to do your research beforehand and choose an experienced artist with a strong portfolio that fits your needs and budget.