101 Best Galaxy Tattoo Sleeve Ideas That Will Blow Your Mind! 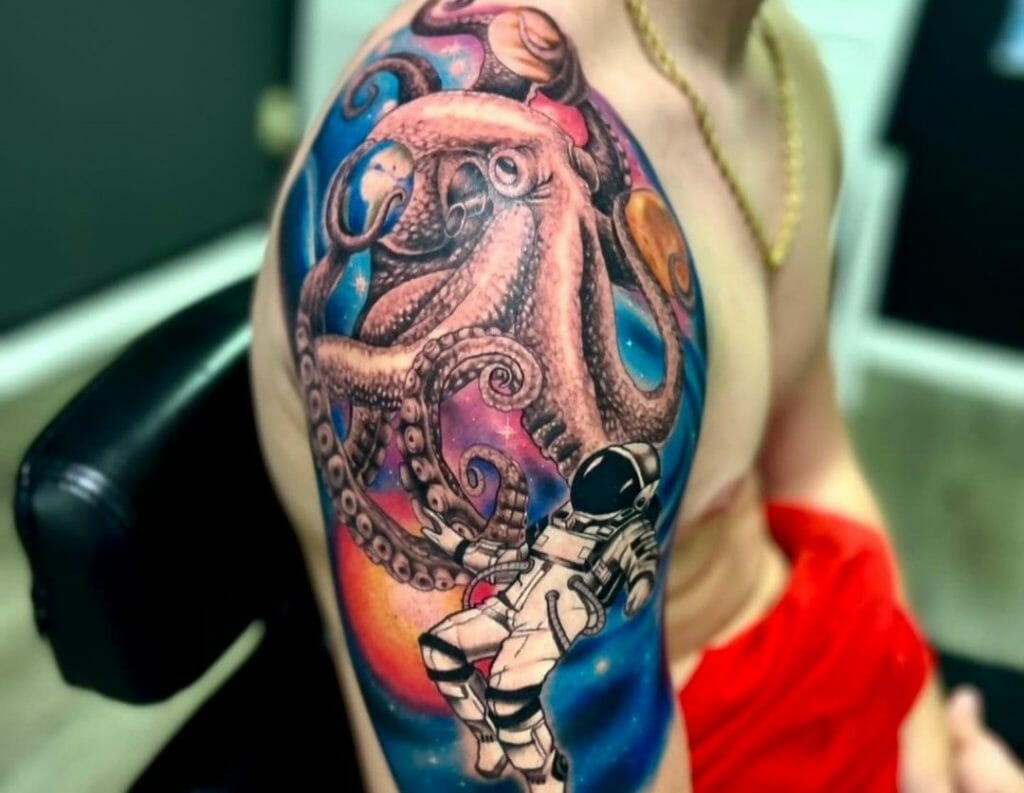 Hunting for galaxy tattoo sleeve ideas? You’ve reached your destination. We’ve picked out some great designs for you. Let’s have a look.

The tattoo artist create fabulous designs of the solar system, milky way, outer space and the entire universe. In recent times, these beautiful galaxy tattoo ideas have literally stepped up in the tattoo game.

They are quite intricate, filled with lots of colours and are of large sizes, which is why they are preferred in the sleeve area. The galaxy tattoos may include, space tattoo, outer space tattoo, universe, stars, earth, celestial bodies, astronaut, planets, mysterious dimensions, etc. The tattoo artist makes sure that they are absolutely breathtaking and all patterns are well executed.

In this rainbow galaxy tattoo, the tattoo artist has exhibited a wondrous blend of all coloured inks in the most intricate way. There various planets, celestial bodies, other galaxies and various other abstract particles floating in the space. The efficiency of the tattoo artist to combine all the colours together in order to make a perfect one piece tattoo is remarkable.

There is no distinction of one colour into another rather everything is well proportioned and each colour has its on perfect placement. There are various concentric circles that are formed from the waves of these colours that gives a clear idea of the gravitational pull of the celestial objects making it clear that this is a small glimpse of a galaxy.

The most beautiful feature in this tattoo is the planet that is there on the shoulder blade area which makes this entire tattoo come together as it is the most recognisable feature of the space and the only planet that the tattoo artist has drawn in this tattoo.

This galaxy tattoo has a unique mesmerising effect into it. The tattoo artist has portrayed the view of the entire galaxy with various elements and has provided enough charm inside every feature of every figure. At the bottom of the tattoo, we have another galaxy that is emitting a lightning wave which is breaking rocks and meteors that are flying in the space.

The colours of the lightning waves are remarkable as it looks very realistic. There are planets side by side and the detailings of the planets are stunning as we can see that the tattoo artist has even made craters and textures of each planet using different ink shaded and dot like patterns.

When you look closely you will find that there is another significant planet which is present at the top of the tattoo and that is the Saturn. The detailing of the Saturn planet are amazing as we can see millions of rocks compiled in it which forms the Saturn rings.

The background of the tattoo is very colourful yet quite dark themed and the inclusion of small details like the stars using white ink is beautiful.

The Orbit Of The Planets

As we all know that as much beautiful as the space seems like, it is actually a place of huge mishaps and destruction among rocks and meteors and various other celestial bodies. So to capture that essence, the tattoo artist has used flames of fire that are quite easy to ignite in the space. These fire are passing through planets, causing severe destruction.

Right below the streak of fire, we have a blue layer of protection by another planet. Each colour in this tattoo is gorgeous, but the main reason that every shade is popping out all the more is because of the yellow base of the ink. The tattoo artist has a great colour selection for thr the best execution.

This galaxy tattoo is the perfect representation of the Milky Way galaxy which has a whirlwind motion appearance at the back. There is a huge display of a celestial body at the top of the tattoo which looks like the moon as there are quite prominent details of the craters and textures on the land.

There is a lot of dust and smoke that can be visually seen floating around the space which is just a mass of the destruction that keeps happening in space due to the chemicals of various elements of the space. The choice of colour selection that the tattoo artist has made for the portrayal of the moon is very mesmerising.

This figure of the moon is basically crumbling away as we can see that there are various rocks and pieces that are breaking down from its original body and are being sucked in by the gravitational pull of the Milky Way galaxy.

Another amazing element that the tattoo artist has included in this tattoo is the figure of an astronaut that is peeping inside the earth. This is a creative touch that makes the entire tattoo more interesting.

Galaxy theme tattoo is an absolute masterpiece. The use of colours, techniques, dots and patterns in this tattoo shows that the tattoo artist has poured out all his skills in this one piece. This is a perfect sleeve tattoo as it has covered every portion of the entire hand.

The colour story of this tattoo is insane as there are mixtures of different hues of the same colour that adds more depth and punch to the tattoo. This tattoo is a 360° view tattoo as the sleeve turns around, the tattoo continues with its mystery.

There are various planets such as Neptune at the top of the tattoo, then we have a Saturn in the middle of the tattoo and the earth at the bottom with a small view of the sun as it is quite distant. The shadings of the inks are very precise and intricate making this tattoo very intriguing.

The black dot patterned and lightly shaded rose is the centre of the tattoo which is quite interesting because the entire tattoo is blasting with colours whereas the main flower is in black and white.

The tattoo artist has faded each colour beautifully and has added white dots in the entire tattoo to enhance the presence of stars and to bring out more beauty.

The colour story is quite unique as you can see that the outlines of the honeycomb are made using blue ink which is reflecting on the astronaut’s helmet. The shadings and linings in the astronaut’s outfit is remarkable. It looks like a pencil sketch with fine details and shadings. Overall, the entire tattoo is quite colourful detailed and creative and is one of a kind.

This galaxy sleeve tattoo is all about the blend of colours. Each colour is submerging into another very seamlessly and the patterns are quite similar to an oil-painting styled art. At both ends of the sleeve, the tattoo artist has also included a figure of an astronaut and a Milky Way galaxy pattern.

The stance in which astronaut has been drawn is basically to show that the astronaut is getting sucked by a blackhole which is present in the galaxy. The thematic effect of the tattoo is mesmerising and the execution is stunning.

This galaxy tattoo right here is more of a homely approach towards the mesmerising scenery of the galaxy. Rather than portraying and focusing mainly on the galaxy and space the tattoo artist in this tattoo has focused more on the story of the family that is walking towards a path of mountains with a starry galaxy night.

The essence of the galaxy and its charm and beauty is reflected on the family‘s presence and somehow it adds more meaning and more depth in the beauty of a family’s relationship. The colours used in this tattoo are very cool toned and the family sketch which includes a father holding hands of his two children have been drawn very adorably and realistically.

This is a cinematic themed galaxy tattoo which is quite authentic and creative. The vision and the execution of this tattoo is remarkable. At the top half of the sleeve we have an astronaut that is clicking a picture using a DSLR right behind him we have a huge reel of films.

In the middle portion of the sleeve which is the elbow area, the tattoo artist has drawn a full-sized moon which has been shaded perfectly and looks quite realistic. At the bottom we have another figure that looks like an alien which is playing the violin.

The music waves blend in quite dramatically with the scenery of the galactic space. The background on the sleeve is that of a galaxy and is quite colourful but on the contrary the figures in front of it are all in black and white. Quite a well executed imaginary tattoo with great details and perfection.

Still confused on your selection? Don’t worry, we have some more suggestions for you. Check them out:

How much does a galaxy tattoo sleeve cost?

The cost of a galaxy tattoo sleeve can vary greatly depending on the complexity and size of the design, as well as where you choose to get it done. Generally, expect to pay anywhere from $150-3000+ for a full sleeve. The more detailed or intricate the design, the higher the price may be. For example, a large and vibrant galaxy tattoo with multiple planets, stars and other celestial elements may cost more than a smaller, simpler one. Ultimately, the cost of a galaxy tattoo sleeve will depend on what you decide to have inked and where you go for the procedure. It’s always best to research around before making your decision. You can ask friends or family who’ve gotten tattoos before, or search online for local tattoo parlors and read reviews. Once you’ve found a reliable place to get your ink done, be sure to discuss the cost with them before getting started. Good luck!

What are some of the best galaxy tattoo sleeve designs?

The best galaxy tattoo sleeve designs are ones that truly capture the beauty and complexity of outer space. Some great ideas include realistic planets surrounded by swirling stars, colorful nebulae with deep blues, purples, greens, and reds, or a more abstract design featuring dreamy watercolor galaxies. You can also incorporate other elements into your design, such as celestial creatures like aliens, moon phases, shooting stars, and so on. If you’re looking for inspiration, there are plenty of images available online from which to draw ideas. Ultimately, the best galaxy tattoo sleeve will be one that expresses your individual style and interests while still being aesthetically pleasing. Have fun creating your own unique design!

What are some of the most popular galaxy tattoo sleeve placement ideas?

The most popular placement for a galaxy tattoo sleeve is usually on the arm. This allows you to make the design as large or small as you want, depending on how much space you have available. It also means that your artwork will be visible when wearing short-sleeved shirts or sleeveless tops. Other popular placement options include the chest, shoulders, back, and legs. You can also opt for a half sleeve design or even a smaller tattoo with galaxy elements on your wrist or ankle. Ultimately, you should choose the placement that best suits your lifestyle and personal preference.