10 Best French Tattoo Ideas That Will Blow Your Mind! 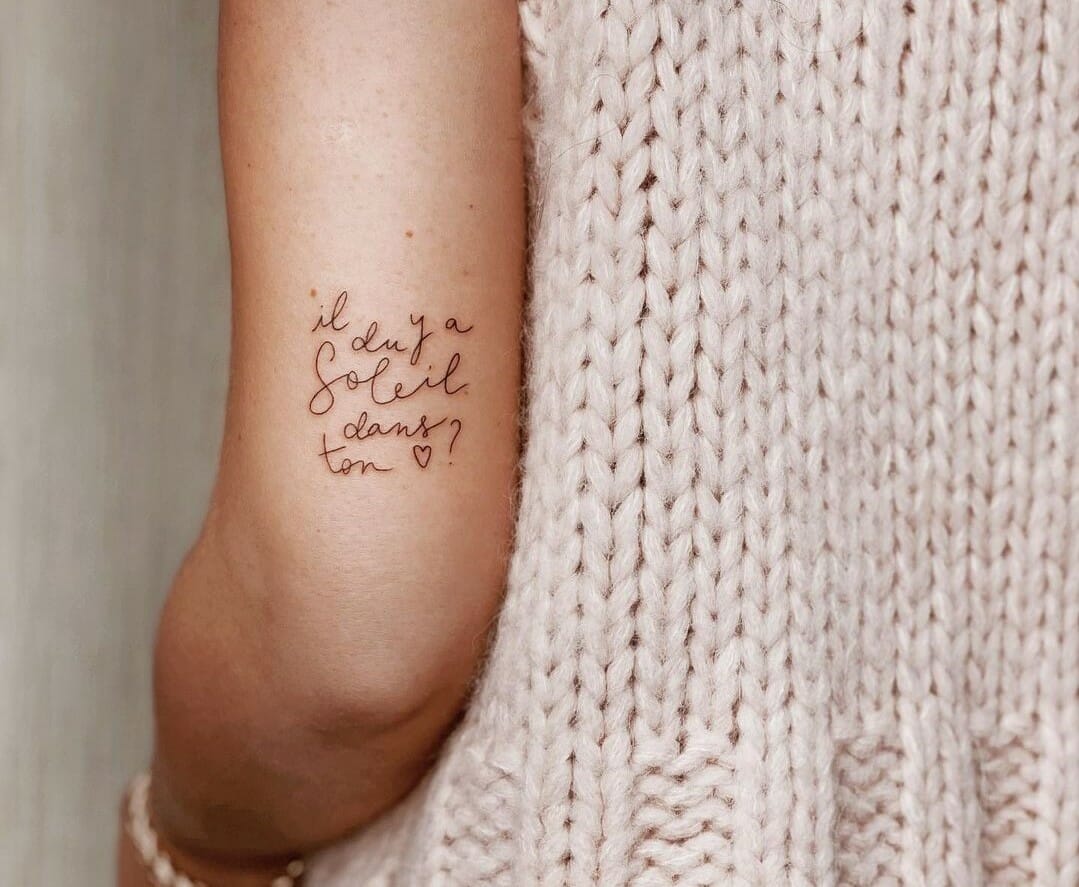 If you are looking for some surreal French tattoos inspired by the French couth, here is a list curated perfectly just to meet your needs!

And indeed, one of the most beautiful things that make life feel glorious and romantic is by using romantic languages like French. A French symbol tattoo has always been a favourite all around the world.

It has also acted as an admirable status symbol because of the incredible French culture known to us. Being rich in food and fashion, there are several ideas for French tattoos when inspired by the French aesthetic. One of the distinct qualities of this culture is that it romanticizes and appreciates every detail of human experience – be it the petty rose-coloured glasses or the famous foods like the French baguette. French monarchs or even French word tattoos with beautiful thin capital letters will suit not only French people but also any other person. Even the French-themed websites have a unique fashion to them which is quintessentially French.

A French word is always enough to bring the charm. So for word tattoos,quotes like C’est La vie or La Vie En Rose or Mise en place or Bon Coeur or Joie de vivre perhaps on the left bicep or wrist or collarbone, even a small one word tattoo is a massive hit for French tattoo quotes lovers. A motto like “Je suis fort” can be a great way to show that you are strong and you don’t need to be afraid of your vulnerable side.

Flowers in the countryside always give an amazing feeling. However, just getting a floral tattoo may not make it French. A great way to go for a French tattoo would be to opt for a French breed tattoo, like a painting from a famous French personality. A great painter, Claud Monet, can be a great find. Valley flowers or flowers in a vase can be a few amazing tattoo ideas that can really pop up and make your tattoo game alive. Also, it shows that you have a penchant for impressionist art.

Created by Belgium cartoonist Morris and French writer René Goscinny is one of the most widely known comics in Europe. This tattoo is symbolic to the inherent character traits of Luke : lanky, funny yet adventurous, fearless, mysterious cowboy going on government missions and bringing forth justice. As an ode to the mythic Belgium creation and if one is a fan of comics, this is one perfect tattoo which by the way, is best suited on upper right arm or calves.

Passion and the French country design vo hand in hand, isn’t it? Romance indeed is seen through rose-colored glasses the culture associated with France. And what is more romantic than two people kissing in front of a French spot? With the Eiffel Tower in the background, this is quite a French tattoo to go for. This tattoo is quite detailed and can bring the art connoisseur in you.

The culture of France is varied. There are various symbols that are attached to the culture and it is known worldwide. So tattoos inspired from those is a direct way to uphold and admire the beauty of it in a subtle manner. Here a mother holding a child can seem like a France holding its nation close – a concept that can be very relatable with France and its concept of motherhood and patriotism.

Eiffel tower, the world popular symbol, of Paris. What is not to love about it? It signifies stability considering the long time it has been in establishment and beauty. If you want a tattoo that is clearly French, then this Eiffel Tower tattoo can be a great find.

Beauty and art of France have been widely known but France is also respected for the defence and navy. The tattoos, therefore, signify resilience, discipline, and strength. This tattoo is of an old French soldier from the First World War and this is perfect for paying homage to their sacrifice. Being a long structured tattoo, it is best suited on the left hip or arms.

As we all know, perfume in France is a love language in itself. Brands like Claude Monet, Dior and Chanel have ruled the hearts since forever. Perfume tattoos are beautiful items that can be kept as a French classic tattoo, signifying the allure of France.

Skyline tattoos are a great way to bring a city into art. Generally, it comes as a silhouette but here, the French skyline brings a new level of design which makes it look exotic. The eye gives a haunting feel with the skyline in between making it a celebration of its culture and the cityscape as a whole.

Jam filling cookies or Macarons or the soup and croquet or baguettes, these are the pride of France. But how about getting a tattoo inspired from that of a French chef itself? With the right dose of stardom in it, it is a magnificent idea to get one tattoo with two different meanings. And as we all know the chefs are cooler and funkier with their tattoos. In reference to this tattoo, this tattoo of Mr. Bocuse, THE chef of France had gained extreme popularity as it was a rooster tattoo and the specialty of it was that it was made by a native American who had saved his life during World War 2 along with other natives. Such a tattoo bears a historical culture with the right touch of French appreciation in it.

From all that we see, French tattoos never run out of style (especially for a trendy instagram post). French tattoo style carries the undeniable charm that is hard to not appreciate and be in awe of because of its fashion and sophistication. Some of the most popular french inspired tattoos are the quote tattoos or the French phrase tattoos, different pieces of art straight from a French art book, wine tattoos from a French wine magazine because French culture is synonymous with luxury, or the classic French flag tattoo. As for the French nationalism, for the perfect tattoo in that arena, it is best to follow the motto of ” Liberty. Equality. And Fraternity ” as these three values are of utmost importance to them. Notably, an element of France can definitely elevate your tattoo game. For more French tattoos, one can easily refer to these tattoo design ideas :