10 Best Fractal Tattoo Ideas You Have To See To Believe! 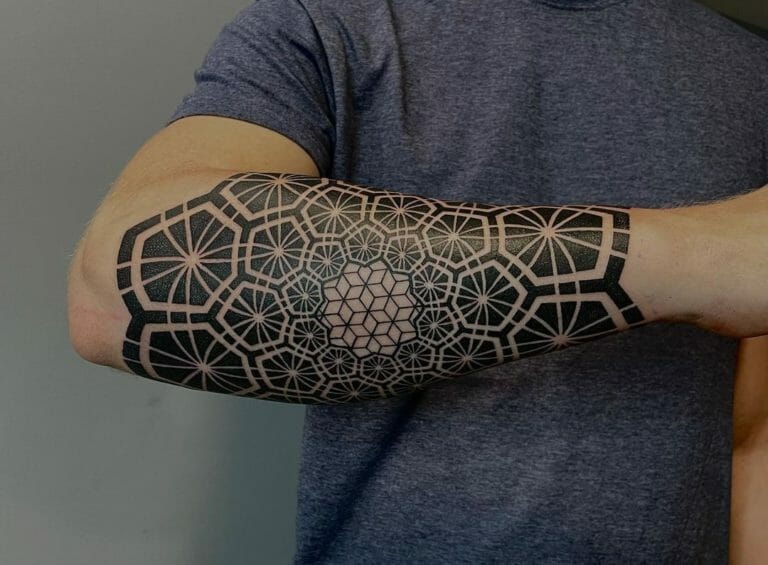 If you find geometrical patterns particularly fascinating as body art, we have curated some of the best fractal tattoos for you to get start inking!

Fractal refers to the geometric patterns that are prone to reiterate infinity. The term emerged in 1975 with a modern mathematician’s find while dealing with queer geometrical patterns.

Repeating sequences are an intriguing feature seen in nature and the universe. Certain things cannot be explained but recur every now and then, starting from the structure of a typical snowflake to galaxy formation. As spooky as it might seem, fractals are amusing to the brainers who are forever in the quest for the unknown. Fractal tattoos are immensely popular among men who are fascinated by repetitive patterns and would like to establish a bridge between human existence and the mechanisms of the universe. Fractal tattoo designs also reveal that the wearer is reliable, observant, and curious with perspective. Keep scrolling to find some of the epic fractal tattoo designs to draw inspiration for your next ink!

Fractal Tattoo Ideas With A Cat For Men

See why we mentioned daily objects? This design takes a regular cat and makes a simple fractal tattoo out of it. The cat is reimagined in terms of geometric shreds, making the design seem as if it is from a different dimension. If you are beginning to learn the intricacies of fractal designs, you can opt for this one on your forearm.

Stuck in between loops and repeating lines, this sacred geometry tattoo is enchanting and at the same time imparts perspective. Sacred geometric tattoos refer to the recurring patterns that are seen to be repeating in nature and our environment and the cosmos on a larger scale. This fractal tattoo is constructed with fine lines and dotwork in black ink and is best suited for men with a broader chest.

Speaking of cosmic geometry, this fractal sleeve tattoo amalgamates Julia set with our solar system. Julia set is the mathematical formula that is referred to while making fractal designs like this one. This repeating cloudy mass that you see in this tattoo is actually a creative representation of the logistics of the formula. Interestingly, the Julia set is said to represent chaos, as is evident from the patterns it repeats, and when placed alongside the planets of our solar system presents a coexistence of binaries.

Did you know Buddhism is considered to be the most scientific religion to exist? This fractal tattoo design portrays the figure of the enlightened in a meditative state and above him hangs a geometric loop in black ink. These geometric tattoo designs are specifically suited for men who like compact tattoo designs that can be placed anywhere on the body.

Trees are one of the naturally occurring fractal patterns that have awed scientists and observers. Here, the tattoo design focuses on the repeating patterns, and the beauty of this geometry lies behind its conciseness and mirroring as is common to trees. The numerous branches and roots repeat themselves in a cryptic fashion that establishes a connection between things yet again. Men can place this geometric design on their chest or on arms accompanied by a sleeve tattoo.

The Fibonacci sequence is yet another sacred geometry found repeating in nature and explains the multiplying the patterns of everything around. It is so prominent that it has gained the title of being nature’s universal rule. Fascinating, right? However, the tattoo artist takes this utterly amusing sequence to another level by creating a fractal tattoo design with a Fibonacci spiral. The idea behind this image is to incorporate dot work instead of definitive lines to get a repeating pattern constituting a brilliant fractal tattoo.

Right when you thought dot work cannot get any better. This sleeve tattoo creates the illusion of a 3D vortex that seems to be repeating itself to infinity, thereby fractal patterns. The dot work in black ink presents abstract geometric patterns that are trippy and at the same time a marvel. Fractal sleeve tattoos like this one can be a popular choice for men who find the image of geometric illusion intriguing.

Flowers are yet another wonder from nature that has been irking scientists for ages. There seems to be a pattern, precisely the Fibonacci sequence, among all the flowers that are in existence. This fractal tattoo takes one popular art based on flowers- mandalas. Mandala patterns mimic flowers and focus on their geometry. Similarly, in this fractal tattoo, the mandala is created by keeping the trope of repeating geometry in mind and further defined by linework in fine ink. The complementary rose serves to pose like a real-life counterpart to the fractal tattoo designs.

This fractal tattoo again resonates with the chaotic repeating geometry with dots and curves in black ink. The tattoo is intricate and reminds us of the universe that was also created from chaos. Placing these fractal tattoo designs can be tricky but these tattoos look extremely appealing on men with large shoulders. Or you can further compress the geometry and make it fit into a sleeve tattoo.

The Mandelbrot set along with the Julia set accounts for chaos within the universe. Interestingly, things in nature show a repeating graph up until a certain point but right then goes berserk and conforms to chaos. This logistic growth can be seen in the animal population and even in the blinking of the human eye. As spooky as this geometry is, the Mandelbrot set presents a beautiful geometric fractal tattoo upon being graphically plotted. This fractal tattoo can be interpreted as an acceptance of the chaotic existence that we live in and could serve as a reminder to position ourselves in terms of the universal. Mathematical formulas when portrayed like this can also become strikingly powerful sleeve tattoos on men.

Fractal tattoo designs are an edgy style that is trending in the tattoo industry with creative variations coming in every day. This curious play of geometry is cryptic, scientific, and amusing that men with an intellectual fascination in tattoo art would find irresistible. Besides men, women are also taking a good interest in these trippy tattoo designs for their back or sleeve. Having said that, here are some more ideas for both men and women to get a fractal tattoo: