10 Best Four Horsemen Tattoo Ideas You Have To See To Believe! 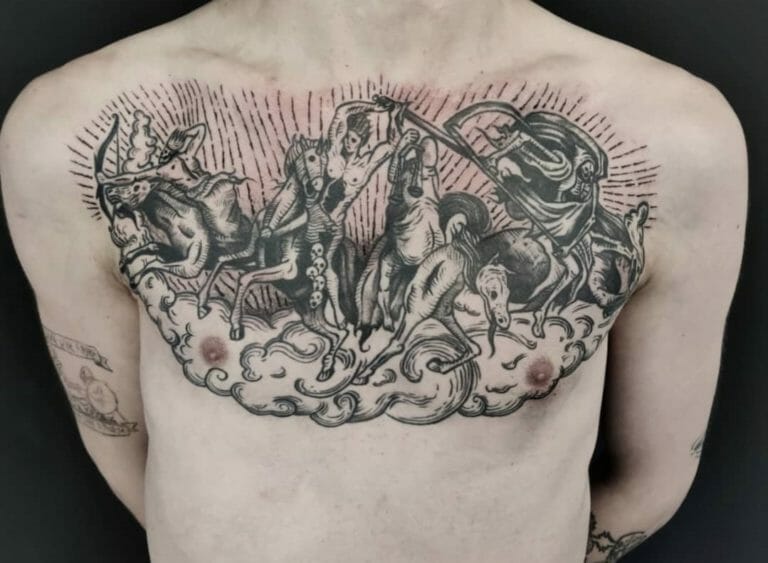 Looking for some apocalyptic tattoo designs to showcase your dark aesthetics? No more. Here are our top 10 picks on the four horsemen tattoos to get you inked!

Four horsemen tattoos are an immensely popular tattoo design among those who love a mixture of dark and sublime body art.

Four horsemen tattoos are basically artistic adaptations of the four horsemen of the apocalypse as is mentioned in the book of Revelation. The idea is to portray the four instruments of the apocalypse- Conquest, War, Famine, Death in a suitable context that they seem like a pictorial representation from the holy book.

The four horsemen are the predestined, divinely sanctioned beings responsible to bring an end to the world as is written to be on the Last Judgement. Thus, they present a dichotomy by their very existence. Some consider the creatures ghastly and thoroughly condemn this idea, while on the other hand, Christians believe that it is just the way of things, of how god planned the beginning and end of the Earth. Besides their rich meaning, people consider getting four horsemen of the apocalypse tattoo due to its sleek design that is both intimidating and scary, and symbolic at the same time. However, these tattoo designs are inherently wider and require more space to bloom to perfection. Having said that, keep reading to find some of the best four horsemen tattoo designs that we have carefully curated for you!

Four Horsemen Tattoo With A Shrine

The tattoo artist here takes their imagination to the time when the four horsemen would be leaving the gates to bring about the apocalypse. Due to their morbid nature, people have commonly associated them exiting the gates of Hell and portrayed as such in popular culture. But we must remember that they are God-ordained beings doing good by ravaging life, and must thus be occupying an incognito place in space and time. This shrine is such an imaginative place that the artist composes to mark the beginning of the end. The hovering raven and crows coupled with the floating skull mark the ghastliness of the design even before we get to focus on the four horsemen. The horsemen can be identified with the weapons they carry- Conquest with a bow, Famine with scales, Death with a scythe, and War with a sword. This design in black with its remarkable shading gives a grim picture that you might want to save for your back or belly if you’re feeling brave.

This is how the painter Albrecht Durer had imagined the four horsemen of the apocalypse in the 15th century. Durer impersonated the agents of apocalypse and painted them in an enigmatic picture that holds the third position in his series The Apocalypse. The four horsemen tattoo here attempts to ink the same sentiment and brings the Classical painting to contemporary art. This detailed, fine line tattoo is a must-have for you if you are an admirer of Durer’s genius. The back might be a great place to ink this design or even the calf in a wrap-around fashion as is shown in the picture.

This tattoo sheds light on the individual statures of the four horsemen with their tools and horses. Characteristically, the horsemen are characterized by the horses and weapons that they carry, but in a strictly monochromatic design, the coloured horses have to be compromised with shading and line work. If you want a distinctive design that focuses on the horsemen individually, this tattoo will definitely be of some aid.

Four Horsemen Tattoo On the Forearm

If you want a design that does full justice to the characterization of the four horsemen, this is your go-to reference. This tattoo design portrays the four beings on their distinctively coloured horses and deathly garb. The white horse of Conquest stands as a symbol for Christ, or Antichrist, the red horse of War for bloodshed and massacre, the black of Famine to mark aridness and decaying fertility, and finally the ashy, pale horse of Death on which Hades rides. This idea also provides a way out of crowding only one space by splitting the four into two forearms. You may also ink them on your calf for the same effect.

These tattoos are never simple, but the idea here is to minimize all the extra jazz that is usually seen in a four horsemen tattoo. The artist here compresses the design into the forearm by placing the horsemen diagonally to each other. Curiously enough, this four horsemen tattoo shows the different faces of the beings, thereby differentiating without any hassle.

If you like to go all-in with your tattoo designs, you might as well consider a full sleeve tattoo with the four horsemen amidst an apocalypse. A heavily detailed piece of art as this requires a lot of time and patience on the part of both parties but the outcome is definitely worth it all. This black and grey design focuses on the attire of the four horsemen in order to incorporate a stylistic edge to the traditional idea. The realism portrayed through the costume of Famine and War, and the burning arrow of Conquest highlights the beauty of this piece.

If you are particularly fascinated by the figure War, a standalone portrayal of the horseman is a great choice. This design is bold, showcases authority and supreme power with the armour of War being aflame. The reckless horse complements the stoic face of its rider and warns of wrath and massacre. You may also experiment with the profile of a Spartan amidst a background of apocalypse for such a tattoo design.

Death arrives on the back of a pale horse signifying lifelessness and decay. The hollowness of the skulls lying around and the horse itself anticipates the entry of Hades and all the darkness. Interestingly enough, Death is not given a black horse, a colour that we generally associate with it. This tattoo design used careful detailing and shading to achieve its grandeur and is aptly suited to be placed on the arm or anywhere with good exposure.

Four Horsemen Tattoo On Back

A four horsemen tattoo is best portrayed on the back given its huge surface area for a canvas. Here, the artist uses black and gray with ample shading and fine line work. The grimmer the better. The beauty of the piece is further accentuated with its fine dot work that makes the design look far more intricate without adding many elements to the picture. Here the artist has mostly worked with the scythe but you can go on to add the designated weapons to the horsemen.

This tattoo artist has reimagined the scene of apocalypse and its agents in this four horsemen tattoo. While War is on the ground bringing about an end to civilization, the other three horsemen are levitating and operating on their machinations. It is a unique design that incorporates so many vibrant shades to the presumably colourless four horsemen tattoo. The design can work really well as a sleeve tattoo if you are saving your back for something else.

A four horsemen tattoo is well suited for anyone who likes to showcase their bold personalities upfront. These designs are not limited to any gender and will make a phenomenal piece of art for anyone and everyone. But as is common with the nature of tattoo art, you must be careful while deciding the design and colour of the piece. Having said that, here are some more suggestions for you to ponder over: