101 Best Fortis Fortuna Adiuvat Tattoo Ideas You Have To See To Believe! 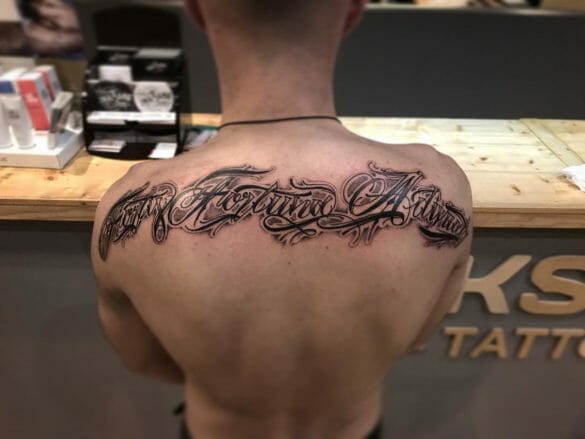 Absolutely enchanted with John Wick’s tattoo collection? We have our top 10 picks for Fortis Fortuna Adiuvat tattoos for you to be a part of the craze!

Fortis Fortuna Adiuvat tattoos have spiked the interest of all Keanu Reeves fans with his role of John Wick.

The admirers of Keanu Reeves, men AND women are hell-bent on getting this tattoo design that was focused on for a few seconds during the shower scene in the first John Wick film of the franchise. However, the tattoo is not only placed for making the assassin look even more menacing, but also contains layers of symbolism for us to decode.

Tattoos have played a role in the film franchise starting from the very first to John Wick Chapter 3- Parabellum. John Wick’s back tattoo reads “Fortis Fortuna Adiuvat” along with praying hands holding a cross. The Latin phrase “Fortis Fortuna Adiuvat” roughly translates to “fortune favors the bold,” an expression that aptly describes the stealthy assassin. Reeves went under rigorous training and almost all things imaginable to perfect himself and fit into the role except getting inked for real. He steers clear of the tattooing journey due to personal preferences and has gone through numerous lengthy make-up sessions for the tattoos that we see on screen. Isn’t that dedication commendable? If you are a big fan of the John Wick films or have the tenacity of the assassin and would like the world to see it, this Latin phrase might just be an apt fit for you. Keep scrolling to find some of the impeccable Fortis Fortuna Adiuvat tattoo designs for you to get started!

This back tattoo comes very close to what Keanu Reeves had in the first film. The lettering here is curved to complement the curves of the praying hands and the cross. The rays that radiate from the center are also some additions that the artist here has incorporated. The tattoo is a symbol, a cue that leads to the boldness of the individual. Though many people argue over the translation to be incorrect and that it must be “fortune comes to save the strong ones” or “fortune favors the brave” at most. This distinction might be primal to the plot of the films and how we perceive John Wick’s character, but we need not delve that deep for a tattoo design.

This design takes John Wick’s tattoos further forward. With the inclusion of two lion heads on either side of the phrase, the artist accentuates the Latin with ferocious imagery. Thus, the answer is not about bold or brave, it is a mixture of both. It demands the wearer to not consider luck and build his own fate because only then will fortune come into the picture. The lion heads replace the praying hands and cross and rather takes the tattoo design out of the film to real life.

Moving away from the John Wick universe, here we have a truly creative representation of the Latin phrase. The Roman goddess is blindfolded, representing blind luck. The belief is that the goddess is not prejudiced towards anybody and would bestow good and bad fortune depending upon your luck. This tattoo used a number of colours to bring the myth of Fortuna in real-time. This design, above all else, serves as a reminder that our fate is actually in our own control and it is one’s own spirit and perception of life that makes or breaks his fortune.

Given the goddess of fortune is blind and free from prejudices, the Latin phrase could also be interpreted as synonymous with Karma. Here, the artist has inked the letters in a rather plain font that is aloof from the John Wick universe and the classical route. The Enso symbol, meaning circle in Japanese, is yet another popular tattoo trope, and when coupled with Fortis Fortuna it appears to be a representation of Karma in a greater sense.

This tattoo design links the ancient Latin phrase with the Christian faith and could be read as a message that the brave ones like Jesus can actually save and redeem themselves and make their own fortune with religious guidance. The cross here is curiously designed with indefinite lines and blotted ends to impart an edgy, contemporary fashion to the tattoo.

This queer, almost weird-looking symbol beneath the Latin phrase is known as the Hand of the Mysteries. The Hand of the Mysteries mean holds a significant position in the history of occultism. The members of the cult believe that the hand is the key to divinity and has been used throughout its existence as an invite to unveil “great secrets” related to the unknown. It is a symbol of apotheosis that could point to the transformation of man becoming God, holding the many tools of enlightenment. Coupled with Fortis Fortuna, this tattoo design stands in an elevated position, attempting to link the mortal with the spiritual.

This Fortis Fortuna design comes with a sword and shield, showcasing the courage of the wearer. The spirit of combat oozes through the design with its complementary delicate leaves adding a tinge of beautification to the motto. The twigs are carefully designed with minute dot work that builds the design in shades rather than bold outlines.

This tattoo design is a strong echo of the fighter spirit displayed by the Spartan profile in red and black ink. The word Fortuna runs through the Spartan with a particular hint on the connotation of bravery and fortune. The red ink further presents a contrasting effect on the design, making it pop in the background. This Fortis Fortuna Adiuvat Spartan tattoo will look great on the parts of your body getting maximum exposure.

If you are still not over the John Wick tattoo, Fortis Fortuna Adiuvat can be inked on your chest in a more miniature version of the idol. The clasping hands aflame is rather a strong reminder of the ideals and motto that one lives by. This design could also side with one’s faith that comes to save in the moments of doubt and urges one to believe that fortune favors the bold. It is also adopted by the 3rd Battalion Marines that use the slogan and maybe hinting towards John Wick’s connection with the battalion. Given its smaller area requirement, this tattoo can also be placed on your arm or the nape of your neck.

We get that you know fortune favors the bold and all the spiritual motivations by now, but getting a neck tattoo will require you to have a more courageous spirit than going on a killing spree like John Wick. This design uses the Roman style of lettering and sits right at the base of the neck and the clavicle area. It is a really cool way to display your motto without falling behind on style trends.

This design is a fancier version of the former with its bead necklace falling over your shoulder. The Latin phrase in cursive uses a light touch of the black ink and calls the strong ones to try this one out. You could also post other tropes popular in the tattooing industry along with the word to extend it to an elaborate chest tattoo design.

Fortis Fortuna Adiuvat With An Eagle

The tattoo artist here adds an eagle and a sword to the Fortis Fortuna seal to magnify the effects of the trio. The representation of the three in the same picture could mean a fierce spirit, wise in service and killing by the eagle, strong martial play by the sword, and a relentless motivation to strive by the seal. The colours of this tattoo are mellowed down to achieve a faded and grainy effect which prevents unnecessary attention to hover around the vibrant colours more than the message. All this makes this strong tattoo is a crime to miss! Place it on your arm or the upper back and watch the awe in people’s faces.

The Spartan helmet is back but this time as an arm tattoo. This monochromatic representation of the warrior within could be a contemporary throwback to the military regime of ancient times. Interestingly, this design uses “Fortes Fortuna” rather than the spelling we have been seeing throughout this time and in the John Wick films. Fortune favors the bold is actually the correct translation of the phrase “Fortes Fortuna Iuvat,” a spelling unseen in John Wick’s tattoos thereby hinting at the possible layers behind the 10-second clip.

This one is for your inner biceps to show your spirit without explaining a word. Simple tattoos like this one can play a significant role, much like the well-decorated ones. It also symbolically bestows your strength in your muscles to gain control and attempts to mean that fortune favors the brave.

Fortis Fortuna Adiuvat has been used by the 3rd Battalion Marines even before John Wick made it full of hype. The phrase in the military could mean a spirit of motivation to keep on going until the goal has been reached or until Fortune has really favored saving you. Incorporating the phrase in John Wick’s tattoo collections has opened many interpretations regarding the man’s personal life prior to becoming an assassin. Nevertheless, John Wick films did spread the word, and now tattoo enthusiasts have another creative domain to ponder about. If you mean to get this phrase inked on yourself, make sure to read about the many variations and meanings that are associated with this concept in order to establish a bridge between popular culture trends and self-expression through body art. Here are some suggestions for you to hover around while considering these tattoos:

What does fortis fortuna adiuvat mean?

This phrase is derived from a Latin saying which means “fortune helps the brave.” It is often used to encourage people to be courageous and take risks, as success may come more easily to those who are willing to face challenges. This proverb highlights the importance of effort and perseverance, as well as optimism and hope, in achieving one’s goals.

This phrase makes for a great tattoo design because of its meaning and the message it conveys. It is also visually appealing, with its simple and elegant font. This tattoo would be perfect for anyone who wants to remind themselves to stay brave and take risks in order to achieve their dreams.

What are the different types of fortis fortuna adiuvat tattoos?

There are many different ways to design a fortis fortuna adiuvat tattoo. Some people choose to have the phrase written in Latin, while others opt for a more modern version of the saying. There are also those who prefer to incorporate other elements into their tattoo design, such as stars or skulls. No matter what your personal preference is, there is sure to be a fortis fortuna adiuvat tattoo that is perfect for you.

How much does a fortis fortuna adiuvat tattoo cost?

The price of a fortis fortuna adiuvat tattoo will vary depending on the size, complexity, and placement of the design. Smaller tattoos may cost as little as $50, while larger and more intricate designs can run upwards of $200. The best way to get an accurate estimate for your tattoo is to consult with a tattoo artist.