101 Best Flag And Eagle Tattoo Ideas That Will Blow Your Mind! 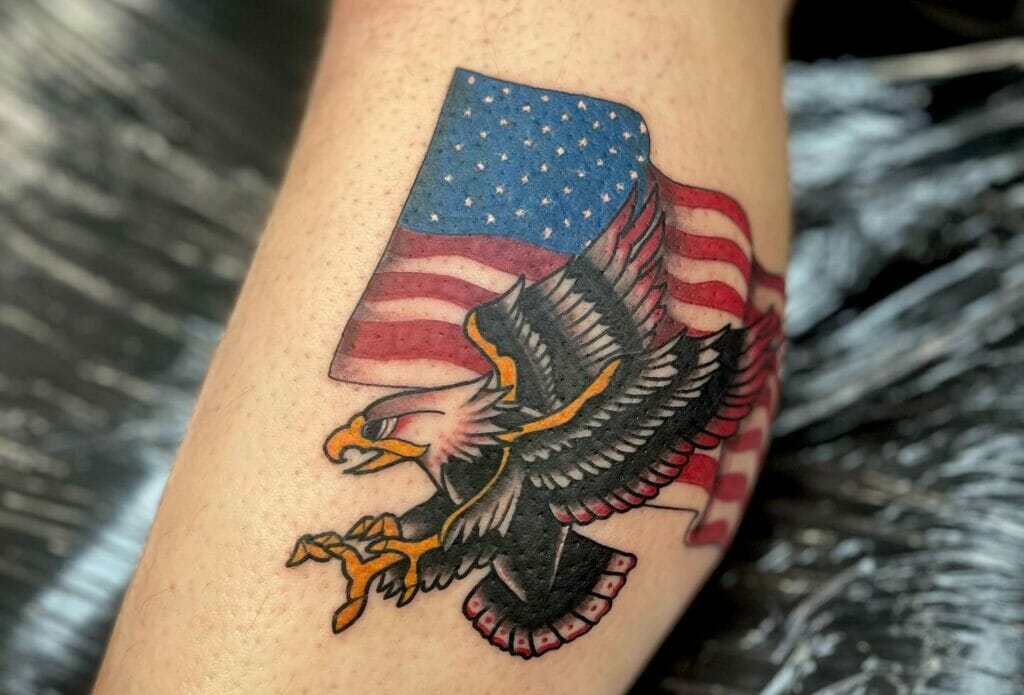 Looking for eagle tattoos with flags? Well, you are at the right place! Check out this article to learn all about flag and eagle tattoo designs!

Many people love to get tattooed an eagle along with a flag.

An eagle is a majestic bird. It represents courage, strength, and immortality. Eagles are known as kings of the skies and are often associated with many countries.

Bald eagle is the national bird of America. The bird is the national bird of Austria, Albania, Kazakhstan, Scotland, and Mexico. There are other kinds of eagles that are national birds of many different countries. For this reason, eagles are often associated with different countries, and people have a sense of patriotism when they get tattooed with an eagle with their national flag. An eagle, along with their flag, gives them a sense of pride since eagles are considered to be “king of skies”. Check out the following tattoo designs to get the best idea about flag and eagle tattoos.

The Black And White Bald Eagle Tattoo With Two Flags

This eagle with a flag is quite large in size. This tattoo actually has the outlines of the eagle holding a flag. The tattoo artist has made the outlines of the feathers. The wings of this eagle are widespread, and it looks as if the eagle is flying in the sky. This tattoo has the number “1453” written on the top of this piece of tattoo art. The eagle has an extremely sharp and crooked beak, and its beak is wide open, and its tongue is sticking out. The claws of this eagle are very sharp, and it holds two flags on each of its claws. On its right claw, the eagle has a flag with many stars on it, and the flag that it has on its right claw has just one star and a crescent-shaped moon in it.

This eagle tattoo with two flags is mostly made of black ink, and the tattoo artist has also used a reddish shade in this tattoo design. The number “1453” is made of two colors. The upper half of the digits are made with red ink, and the rest of the tattoo is made of black ink. Half of Each feather on the left side of the eagle is painted black, whereas, on the right side, just the outlines of the feathers are made. This tattoo would be a popular choice for the chest.

The American Flag Tattoo With The Majestic Bird

The eagle and the hourglass are totally made of black ink, but for making the American flag, the tattoo artist has used all the colors that are used in an American flag. The stars in the flag are of skin color. This tattoo is very big in size and would cover the whole arm and look amazing.

This tattoo has an eagle head, and an American flag is flying behind the eagle. The beak of this eagle is curved more than any other eagle tattoo on this list, and it looks very sharp.

This tattoo is totally made of red ink. The feathers of the eagle are made with black ink, and the head is of skin color.

This tattoo is very different from the other images of tattoo designs in this list. This tattoo has an eagle with its wings spread wide open, and the toes are also in two different directions. In the middle of the tattoo, there is an American flag, but there are no stars in it. There are stars above the eagle made in a circular cloud. The creature holds a ribbon with its beak with “E PLURIBUS UNUM” written on it.

This tattoo design has an eagle along with two flags. The two flags are behind the eagle. The flags are made diagonally, crossing each other. The eagle has a sharp beak that is wide open, and its tongue is coming out. One flag is an American flag, and the other flag has a “fleur de lis” made in the center.

This tattoo is made of a lot of colors. For making the feathers of the eagle, a black shade is used, and some portion of each feather is colored. A part of the feathers also has an orange color. The beak and the claws are made with bright yellow ink, and the talons are made with black ink. This tattoo would make a great chest tattoo.

This tattoo is very big in size. This eagle tattoo just contains the head of a bald eagle, and the stars are in the American flag. The stripes of the American flag are painted below the head of the eagle, and there is “We the people” inked in this tattoo. This tattoo is an extremely detailed tattoo. The beak and the eyes are made with such detail that it almost looks like a real eagle.

This tattoo is totally made of different shades of black ink, and just the eye of the eagle is made of yellow ink. The shadows on the feathers of this eagle are painted with darker shades of black. This tattoo would look great on the upper part of the arm.

This tattoo design has the head of a bald eagle, and in the center and behind that, there is an American flag waving in the background. The bald eagle has an extremely sharp beak, and the eyes and feathers are extremely detailed.

This tattoo is totally made of black ink. There are different shades of black ink used by the tattoo artist. The shadow that occurs under the beak of the eagle has dark black color, and the other parts have a lighter shade of black. This tattoo is a great choice for the upper arm.

The American Flag With Its National bird Tattoo

This tattoo has the head of the eagle, and behind the eagle, there is the American flag waving in the air. This tattoo is quite large in size. There are a lot of colors in this tattoo. For making the eagle head, mostly black ink is used. The beak of the eagle looks very realistic and very sharp. The eyes of this eagle are yellow colored, and the eyeball is made in dark black color. The American flag has all the colors that are usually in it. This tattoo would look great on the lower part of the arm.

Eagles are often used to symbolize pride, and very often people get a flag tattooed along with the eagle because it is a symbol of their pride that they have for their own country. Eagles look very good on the skin and as well as make a person look unique and intriguing. Here are some other kinds of eagle tattoos which will blow your mind!

What does the flag and eagle tattoo represent?

The flag and eagle tattoo is a popular symbol of patriotism, freedom, and bravery. It typically features the American flag in some form along with an eagle perched atop it or flying high above it. The combination of these two symbols represent American ideals such as strength, courage, and resilience. This tattoo can also be used to express pride in one’s country and respect for the sacrifices made to maintain its freedom. Many people choose to get this tattoo in honor of a family member or friend who served in the military, or simply as an expression of their patriotism. The flag and eagle tattoo is a powerful way to show your support for America and its freedoms.

What is the meaning behind the flag and eagle tattoo?

The flag and eagle tattoo is a tribute to the United States of America and its core values. It symbolizes freedom, bravery, and honor. The American flag stands for liberty, justice, and equality. The eagle on the other hand represents courage, power, and strength. Together they make up a strong visual representation of patriotism and national pride. This tattoo is often seen as a sign of respect for those who have served in the military and the sacrifices they have made to protect our nation’s freedoms. It can also be used to honor loved ones, celebrate special occasions, or simply express one’s passion for their country. No matter why someone chooses to get this tattoo, it is typically seen as a mark of honor and respect.

How popular is the flag and eagle tattoo?

The flag and eagle tattoo is a very popular choice among people of all ages. It has become increasingly common in recent years due to its deep symbolism and strong visual impact. This tattoo can be found on the bodies of veterans, active military personnel, and patriotic civilians alike. Its popularity has even extended beyond the United States, as many other countries have adopted their own version of this iconic design. The flag and eagle tattoo is a powerful way to represent one’s love for their country, and it continues to remain an incredibly popular choice among the tattoo community.

What are some of the popular flag and eagle tattoo designs?

Flag and eagle tattoos come in a variety of designs, from traditional to modern. The most popular design is typically the American flag with an eagle perched atop or soaring across it. Other common variations include adding other patriotic symbols such as stars or stripes, incorporating colors into the design, and even including quotes or phrases related to patriotism. Flag and eagle tattoos can also be used to represent different countries, such as the United Kingdom’s Union Jack flag and England’s national bird, the red kite. No matter what design you choose, a flag and eagle tattoo is sure to be an eye-catching expression of your patriotism.

How much will my flag and eagle tattoo cost?

The cost of a flag and eagle tattoo will depend on various factors, such as the size, complexity of the design, and where it is placed on your body. Generally speaking, small to medium-sized tattoos can range from $50-$500 while larger pieces may cost up to several thousand dollars. It’s important to do your research and find an experienced, reputable artist who is willing to work within your budget. Remember, a flag and eagle tattoo is a meaningful way to express your patriotism so it’s important you invest in quality work that will last for years to come.