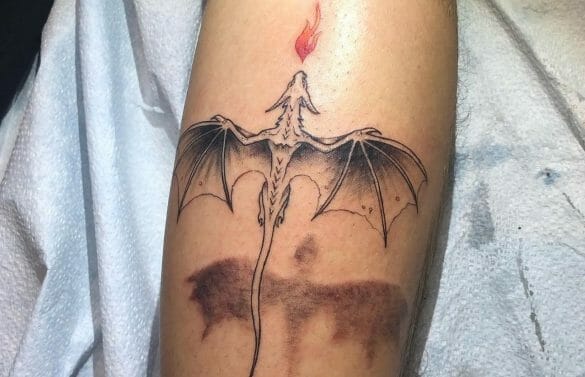 Dragon tattoos have been around for quite some time and are considered to be suitable for both men and women.

Apart from cultures, dragon tattoo colourations also depict certain meanings behind them. For instance, a red dragon tattoo stands for wisdom, while a blue dragon carries the message of benevolence. So, many people opt to get inked with both a red dragon and a blue dragon, as these two creatures symbolize two contrasting meanings. You can also get a fire breathing dragon and tiger tattoo, despite the two being mortal enemies, as such tattoo designs are undoubtedly some of the best dragon tattoos.

Continue reading to find a guide to the best fire breathing dragon tattoo designs that you can ink on your body parts!

Sketch tattoos have been rising in popularity in the last few years. So, a sketch dragon tattoo incorporating the element of fire will only depict raw power. Here, the dragon head has been inked in Japanese style, and red flames surround the head of the dragon. Apart from the meanings mentioned, Japanese dragon tattoos are also said to represent royalty. So, you will certainly look quite a regal sporting this tattoo design.

You already know the symbolism of Chinese dragon tattoos. Additionally, Chinese dragons, who are quite powerful creatures, are often depicted quite aesthetically. As you can see above, here, the Chinese dragon has been inked vertically on the side of the stomach and is surrounded by flames. Despite lacking any vivid colouration, the tattoo has come to life simply due to the wonderful interplay of light and dark shades. This certainly has to be one of the best dragon tattoos.

Looking for a dragon sleeve tattoo that will take everyone’s breath away? Then check out this tattoo design. The fierce dragon is covering the entire upper arm and has vibrant and vivid flames surrounding it. The dark tones of the dragon and the bright colouration of the flame make for the perfect contrast. Such a dragon tattoo design will perfectly uphold the deep meaning of power associated with dragons since ancient times. While such designs are usually considered to be tattoos for men, even women can opt for this tattoo.

Forearms tattoos form quite a wonderful accessory for both men and women. So, if you want a fire breathing dragon tattoo design on your forearm, then this is the option to go for! This is basically a dragon head tattoo. Dragon heads are used to symbolize strength. Furthermore, a dragon head breathing fire tattoo meaning is associated with fierceness and power. Here, the dragon depicted seems to be a Japanese dragon. Hence, altogether, this tattoo is the perfect combination of colours and strong hidden meanings.

Even though dragons represent power, it does not mean small dragon tattoos are any less meaningful. In fact, a small dragon tattoo can be the perfect symbol of strength and good luck that you can conceal at any time. Here, as you can see, only the outlines of the dragon and the fire have been done. The long neck of the dragon is extended, and a gush of flames is coming out of its mouth. Such a dragon shoulder tattoo design is both cute and fierce at the same time. Additionally, the contrast of red and black shades are noteworthy here.

The best thing about dragon tattoo designs is their versatility. So, if you want a fire breathing dragon tattoo that looks straight up adorable, this is the perfect option for you. Here, dotwork has been used by the tattoo artist to create the dragon and the flame. The dark and light shades that have been used to depict the dragon give it quite a marvellous look. Additionally, the colour of the flame in this tattoo is quite unique, making the whole motif stand out. Such a tattoo would look great on the arm, as pictured.

Chic dragon tattoo designs are for both men and women, who want a tattoo that does not take up a lot of space, but still looks trendy. In this fire breathing dragon tattoo, the upper view of a dragon has been portrayed, with a ball of flame in front of its head. The tail of the dragon here is also covered in flames, giving it a unique appeal. The main attraction of this tattoo is the perfect colour combination of black, grey, and red. Together, these three colours breathe life into this body art.

A realistic dragon tattoo has got to be as good as dragon tattoos get. So, for your realistic fire breathing dragon tattoo idea, this one is the perfect option. Here, the dragon and the flames are covering the entire forearm and are giving quite the look of fierceness. The colours used to ink the body of the dragon, along with the perfectly shaded flames, are all combining to give life to this design. Such tattoo designs also make for great chest tattoos. Additionally, chest tattoos can be easily concealed.

Geometric tattoos may never go out of style, as these are some of the most popular tattoo designs. Here, as you can see, a dragon has been inked in a circular shape, and it seems like it’s breathing fire. Apart from the uniqueness of this design, the brushstroke effect is also quite eye-catching. Additionally, in many cultures, circle tattoos are used to represent totality. So, such a dragon tattoo is not only aesthetic to look at but also packed with meanings.

Now that you are aware of the various fire breathing dragon tattoo ideas, you can easily select a tattoo that goes with your personality. The best part about these dragon tattoo designs is that that they can be used featuring a Chinese dragon, Japanese dragon, tribal dragon, or any form of an abstract concept. A dragon tattoo meaning will keep changing based on the culture it depicts. Additionally, a dragon breathing fire tattoo will be your own personal form of lucky charm.

Here is a quick compilation of the various fire breathing dragon tattoo designs that can be good luck charms for everybody!