10 Best Fighter Jet Tattoo Ideas That Will Blow Your Mind! 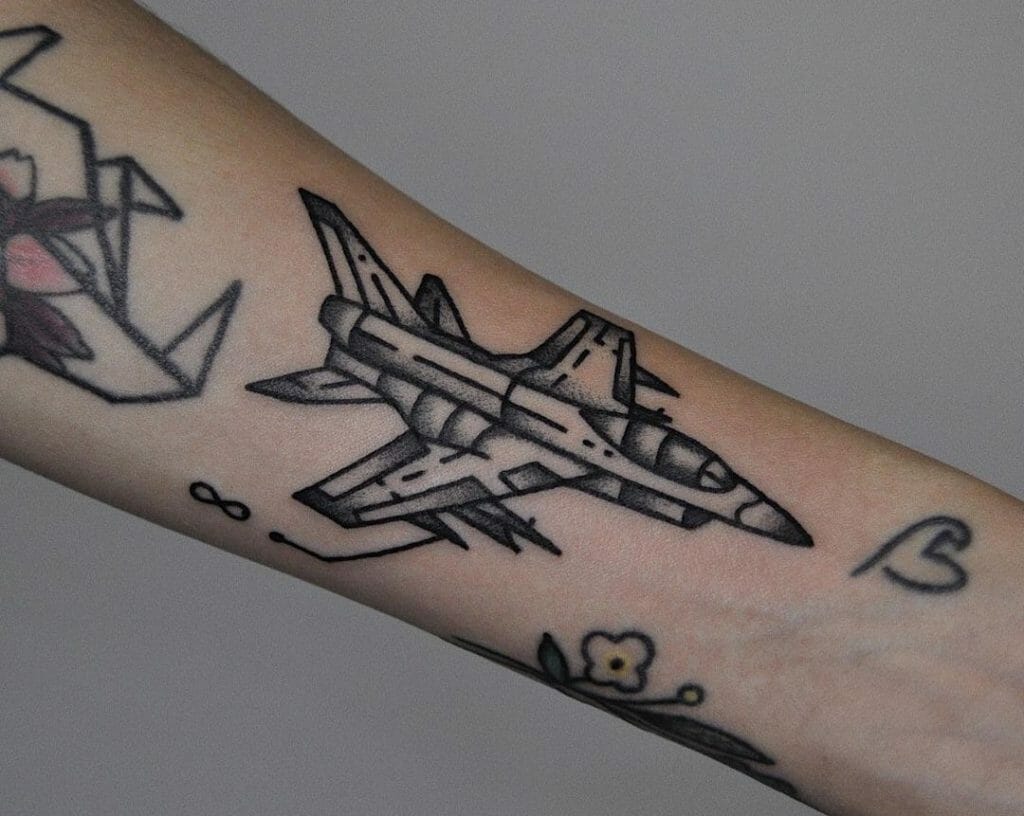 Getting a jet fighter tattoo is a new craze among millennials.

To be honest, you don’t need to have a background in military aviation to crave some flying tattoos in this day and age. Getting a fighter jet tattoo on your body can also symbolize your support to the Air Force or it can mean ambition or resilience to yourself.

Fighter jets have been a fundamental part of military power since the mid-20th century. Fighter jets are generally used to secure control of essential airspaces by driving off or destroying enemy aircraft. Today, some of the most popular fighter jets active of all time are – F6F Hellcat, F-4U Corsair, MiG-15, F-86 Sabre, F-4 Phantom, MiG-21 and many more.

After World War 1, the usage of fighter aircraft grew exponentially to fight combats in the air. This in turn has also led to the marketing of fighter jets in popular culture and thus a resurgence in the popularity of such tattoos. If you like to live life on the wild side, you should check out these badass fighter jet tattoos that are bound to make you soar high.

Usually, something technical like a plane tattoo is done in black and white with a lot of attention to detail. But if you are someone who enjoys little splashes of colour in your tattoos, then this tattoo will be a great fit for you. With a bright orange design on the background, the tattoo artist has really done a great job of highlighting the fighter jet which also has shades of grey in it.

These types of black and white and detailed tattoos provide classic examples of a jet fighter tattoo. The tattoo in the picture is of an M-15 fighter jet, which is a cult favourite and one of the most popular fighter jet tattoos. The tattoo artist has to put in a lot of effort to create this kind of tattoo which has a great amount of little details worked into them. These types of full-scale fighter jet tattoos usually look good on the upper body area.

Pencil Sketch Or A Blueprint Of A Fighter Jet

This tattoo is purely detail-oriented and has a blueprint sort of feel to it. It almost looks like a sketch of a fighter jet. This tattoo does not have any kind of shading done to it, and as a result, it gives a beautiful 2D outlook. The tattoo artist has put in a tremendous effort to bring forth every little detail in the tattoo. He has also added a dotted background on the tattoo, displaying the airwaves made by the fighter jet.

This is a full shoulder sleeve plane tattoo with great visuals and intricate details. It has the main fighter jet as a centrepiece and several other fighter jets in the background. This tattoo also displays a lot of text in it. This tattoo looks great with vibrant black colour and detailed shading giving it a very beautiful 3d look.

This is a beautiful tattoo of a fighter jet with sky and clouds in the background. This simple yet elegant plane tattoo will surely enhance the tattoo’s charm. The tattoo artist has carefully designed and shaded the entire piece to give it a nice 3d finish.

The F-22 fighter jet which has a double tail as shown in the picture is another one of the most popular tattoos. You can put on your creative hat with this tattoo design and add in some dramatic waves coming out of those engines, and voila you get a magnificent looking fighter jet tattoo. You can also add some extra details on the background or on the body of the plane tattoo.

A Full Sleeve Tattoo Fighter Jet In The Action

This is a full sleeve tattoo usually done on the arm or leg area. It showcases one primary fighter jet flying away alongside several others. There is a beautiful background of cityscape done in black overtones behind those fighter jets. It also showcases shades of sky and clouds and rivers. As this is a full sleeve plane tattoo, it can take a lot of time to get this done properly. Do keep this in mind while choosing when to get this tattoo done.

This tattoo is very different from traditional fighter jet tattoos. It has a very cartoonish feel to it and it’s also very small in size, so you can do it literally anywhere on your body. In our opinion though, this type of fighter jet tattoo will look very good on the arm and/or the shoulder area. You can also customize your airplane tattoo and add a splash of colour to it or add some interesting background. It is very easy and quick to do, which works out if you lead a busy lifestyle and do not have free time for more than a day.

This is a very minimalist and detail-free tattoo for those looking for an easy fighter jet tattoo to do. The tattoo includes various shapes and sizes of black and white triangles to convey the shape of an actual fighter jet. It is fairly easy to tattoo this on any part of your body and it also gives you a very unique and stylish outlook. This tattoo is a great option for those looking for minimalistic tattoo ideas.

Fighter jet tattoos are not for only decoration purposes, you can also convey your own innermost personal feelings and deep-rooted values through them. If you liked these 10 fighter jet tattoo ideas, then here are some bonus ideas for you.