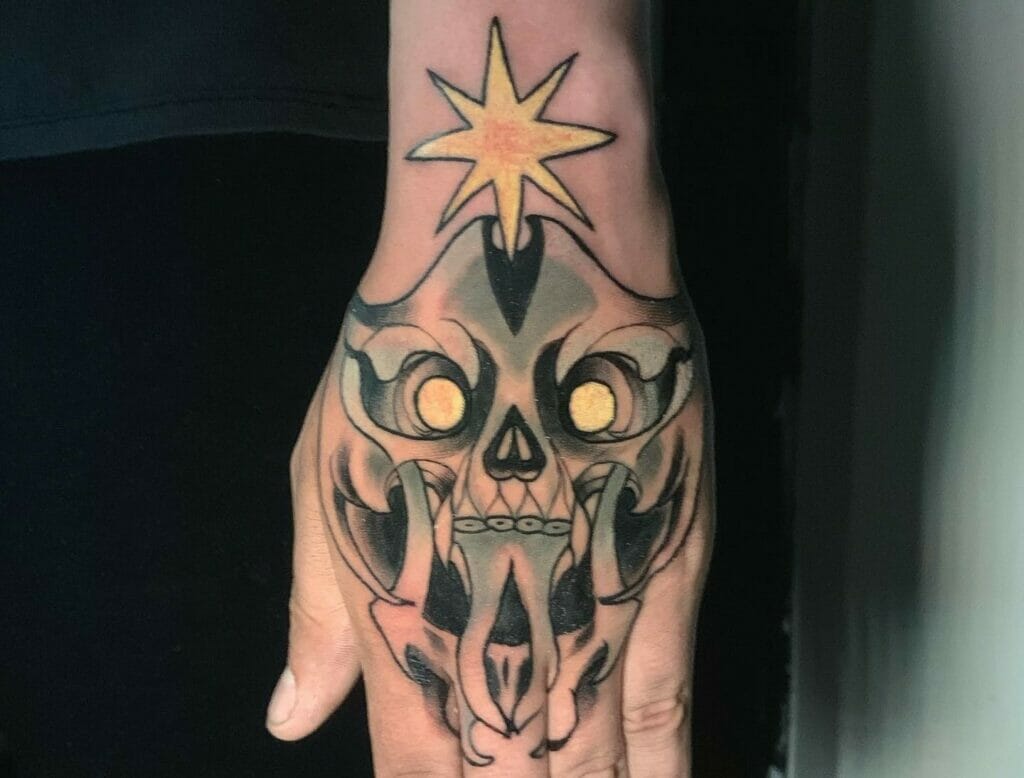 If you want to show positive vibes with a dead skull tattoo then the feminine sugar skull tattoo is the perfect choice to go for.

The edible sugar skulls or decorative clay skulls that are created and used on the Day of the dead are also known as Calavera.

The tradition of creating such skulls can be traced back to the 17th century and was found in the Aztec, Toltec, and Mayan cultures. The sugar skulls are often associated as offerings presented in the De Los Muertos for the loved ones who have passed away.

The concept of sugar skulls also became extremely popular as a form of art due to the lithographs of Jose Guadalupe Posada in the twentieth century who was a political caricaturist.

Where a skull symbol is considered to represent death and decay the sugar skull tattoo demonstrates something totally opposite. Also known as candy skulls they are extremely popular around the world and are associated with the day of the dead. These candy skull tattoo designs are often colorful as they are ornated with a variety of inks.

The best place to put these tattoos is on the wrist, chest, forearm, thighs, shin, and back. This sugar skull tattoo is often done to pay respect to the ancestors who have left the tattooer in deep mourning. The feminine sugar skull can also represent rebirth and thus shows the positive sides of life rather than the negative ones associated with skulls.

When a woman’s image is created using the sugar skull it firstly represents the feminine power. The tattoo ink can range from black to other colors and is mostly put on the forearm, wrist, bicep, back, chest and shin. These sugar skull tattoo designs can be done in a variety of formats.

Half sugar skull and half woman face, woman face sugar skull fused with objects like cross, leaves or flowers, and sometimes even only a woman face painting in the style of the sugar skulls are done. They can demonstrate that the tattooer has done this tattoo in memory of a female figure like a friend, mother, sister, or anyone who was most close to their heart. Other than these it can also be done in celebration of the idol Catrina done by Jose Guadalupe Posada.

These sugar skulls can also be ornated with diamond eyes and flowers like roses and marigolds and are done on the bicep, chest, back, thighs, calves, and shin. The ink color used can be traditional black or multiple colors just like the day of the dead makeups and costumes.

These skull tattoo ideas consist of more than one sugar skull and can reflect a variety of meanings. This tattoo design is mostly done in black ink and it tells a story that is related to the Dia De Los Muertos. Depending on the size and number of skulls these sugar skull tattoo designs are best suited on the forearm, shin, back, thighs, and chest.

When done with two sugar skulls and roses it represents lovers and is mostly done as a matching tattoo, three sugar skulls can represent siblings or a nuclear family, and more than that represent extended family members. They are done by the tattooer in order to remember a person whom they have lost but with the tattoo they still have their memory etched in their skin as body art.

Recently small sugar skull tattoos are becoming extremely popular around the world. There are multiple reasons why women opt for these small sugar skull designs. As the stature is small it can be put anywhere in the body from extremely visible parts like the forearm, neck, wrist, and finger to extremely personal places like thighs, chest, and below the belly button.

Multiple decorative colors can be used or traditional black and it totally depends on the tattooer. The intention of the tattoo is to show honor and remembrance to the loved ones who have left and also express family, strength, joy, and freedom when done with sugar skulls. Though small in stature their subtleness speaks volumes about the trait of the tattooer.

The flower tattoos using the sugar skull designs are one of the most beautiful designs one can get etched with. A flower is often associated with women’s beauty and doing it with a feminine sugar skull on a woman’s skin thus makes more sense. The color of choice can be either black ink or multiple colors according to the need.

Not only does this sugar skull tattoo design celebrates the day of the dead and is done in the memory of a beloved but each flower represents different meanings. Red roses represent passion and everlasting love, marigold are known for their fragrance and beauty, lotus is associated with spirituality, and many such ideas with deeper meaning. The best and most popular among them is the rose tattoo which is done to show everlasting love and passion to a deceased loved one.

In the Mexican culture, Dia De Los Muertos, or the day of the dead is one of the biggest festivals. Traditionally celebrated on the days of November 1st and 2nd, in the dead festival all Mexican people dress up wearing costumes and putting on make-up; dancing, singing, and holding parades in the street. They also make offerings for their loved ones whom they have lost.

Now getting a feminine Mexican sugar skull will similarly reflect the Mexican heritage and the tattooer’s love for it. The dresses and makeup worn by the people mostly consist of bright colors and so the tattoo is similarly made with colorful ink. This great tattoo can be done on the forearm, chest, back, biceps, and shin.

These hyper-realistic sugar skull tattoos are considered to be one of the best sugar skulls in the tattoo industry. Realism was an art technique that became popular in mid-nineteenth century France but using that to create a colorful sugar skull tattoo is somewhat of a feat. The human skull is mostly etched with colorful ink and done in such a way that it seems to come out of the skin.

Women prefer these tattoos on the forearm, wrist, back, chest and thighs. Generally, they are done in memory of the close ones the tattooer has lost. But they do not portray the gruesome death and morbid images associated with skull tattoos. This colorful tattoo highlights the notion that we must live life to the fullest and not think about our next life.

The owl tattoos with sugar skulls have a great association with spirituality and can be fused beautifully together. Ancients believed that the owl guided the souls of the dead to the underworld and the candy skull tattoo represent those departed souls only. The best places to put these designs on the body are the bicep, thighs, calves, chest, and back.

Either traditional black ink or vibrant colors can be used to get this best sugar skull tattoo done. Other objects like roses, a cross, and a dreamcatcher can be added with the owl to make it more interesting and give it a tribal look.

Getting a feminine foot sugar skull tattoo is a great way of honoring someone you have lost. These sugar skull tattoos blossom extremely well when done with quite a large space which is easily available in the foot and its adjoining areas. They can be either done in black or colorful ink depending on the tattooer’s choice.

Doing a foot tattoo shows that the person is either shy or does not want others to meddle in their personal life. But doing a foot tattoo also has its disadvantages as for some it can cause a severe amount of pain and they mostly fade faster due to the constant rubbing of socks and shoes.

The sugar skull tattoo design concept is so beautiful and important that it was etched like a tattoo in the Representative List Of The Intangible Cultural Heritage of Humanity by UNESCO.

Other tattoo designs that can be done using these sugar skull tattoos are: