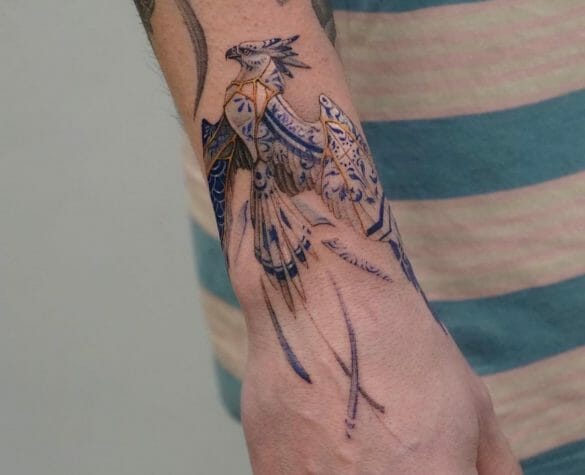 What can be more bold and inspiring than a phoenix – a bird that rises from its ashes! Well, check out this awesome list of feminine small phoenix tattoo ideas!

Tattoo lovers chase phoenix tattoos more than others, perhaps due to their intense and rich symbolism.

Do you know the phoenix bird? You must’ve seen it in the Harry Potter movies?

These mystical creatures depict rebirth, a metaphor for resuscitation and transformation that countless folks relate with. Hence, augmenting the fame and preference for this motif in the world of tattoos.

However, is phoenix solely about regeneration and transformation? Well, this mythical bird is also heavily linked with the Sun, a centre of all energy and life. What makes people turn so avidly to phoenixes for tattoos? That’s because they are a kind of a marker that marks a beginning of a new life. It hogs immense power and strength. So, every time, you feel yourself on the cusp of quitting everything, a single glance at your phoenix tattoos will push you to face the storms ahead and discover a new path. Get it on your back, make it a chest piece, or flaunt it on your arm!

Express your adoration for phoenix and the message it stands for through phoenix tattoo designs that match your taste. Read on to discover more about some cool tattoos of this bird and the facts and different meanings associated with them. Check these designs with phoenix tattoo meanings.

Do you crave watercolour phoenix tattoo designs that stand out? Grope no further than this mesmerizing tattoo of this majestic bird! This style which employs vibrant colours that make this bird tattoo come alive on your skin creates eye-catching results. The graceful and cautious shifts in the shades are often made without outlines which renders the piece a more gentle and feminine look. This watercolour phoenix design tattoo is an incredible way to unleash one’s creativity with tattoo designs. The bird is created in electrifying and contrasting shades of pink, purple, and blue with a hint of yellow, indicating fire, with which it is typically associated. You can try out different placement options for this amazing phoenix tattoo such as the arms, back, or chest. Make your statement with this cool feminine rebirth phoenix tattoo.

Notice the hues, orange, crimson, black, yellow, green, cyan, and more. Don’t you think the strokes are rendering this phoenix tattoo irresistible? Long-tail feathers drawn meticulously with white and black ink freckles that give it a sparkling appearance, seem to sway fiercely yet with grace. The bird, for sure appears stunning in the different shades exploited to create it. This meaningful tattoo design stands out with its intricate details and it allows you to experiment with the creativity as much as you can. The sky is the limit, here! You can consider having it on your back, chest, or upper arm, and see how it attracts those around you. With this eye-catching tattoo of a phoenix, the myth appears to come alive in all its glory and splendour. The feminine hues render this phoenix tattoo design a remarkable choice for women worldwide. Ready to try this phoenix rising from ashes tattoo? Let this phoenix feather tattoo inspire you till eternity!

This elegant black and white Japanese phoenix tattoo idea features careful strokes of black and grey. It etches an appealing image of a phoenix, with bold yet light strokes. The tattoo design is quite versatile, popular, and can be placed anywhere flatteringly. However, the most covetable placement positions are the back, hip, upper back, upper thigh, ribcage, and abdomen. These small tattoos are widely carried on the back and abdomen. Often such tattoo ideas are loved by those who love simple tattoos and phoenix at the same time. This rising phoenix tattoo, one of the famous Japanese tattoos, shows the bird spreading its wings far and wide and looking up. This stunning tattoo has a symbolic meaning of being resilient and strong. Starting from its feathers, sharp claws, and wings, each element will leave the beholder stunned. Try the small phoenix tattoos out for your new beginnings!

Of all the bird tattoos, tribal phoenix tattoos are extremely popular among men and women, and incorporating a simple yet artistic image of a phoenix makes it even more impressive. Tribal aesthetics with graceful turns, angles, and twists make this tattoo option unique. It boldly expresses your style statement and personality. If you are someone who adores edge or wishes to express their culture and tradition, you may adopt a small tribal phoenix tattoo. Phoenix tattoo is becoming popular for a reason: they are extremely versatile, subtle, discreet, and can suit any placement. The best placement position for this tattoo of this bird with eternal life is at the wrist, top of the arm, shoulder bone, neck, back of the arm, and upper thigh. This tattoo shows that tattoos that aren’t etched in bright colours can also be the best. Minimalistic versions of tribal small phoenix tattoos are as effective in enamouring the world as the big and bright ones.

In Feng Shui, dragon and phoenix are deemed as a symbol of love, an auspicious symbol that welcomes matrimony bliss. When taken individually, the phoenix represents “yang” the male energy while the dragon represents the “yin” the female energy. However, as both come together, they have a deeper meaning and represent values like togetherness, harmony, and love. Furthermore, Phoenix- the immortal creature and Dragon are also one of the most powerful symbols used in Chinese Mythology whose other meanings are prosperity and success. Dragon and phoenix tattoo design is immensely popular among tattoo lovers as it features a marvellous blend of two of the most favourite elements of design culture. Both the creatures in this phoenix tattoo are associated with fire, where one blows it in its breath while the other is known for rising from its ashes. The simple and elegant dragon and phoenix duo tattoo will definitely leave everyone impressed. Are you getting this Chinese phoenix tattoo?

Are you a fan of bold and expressive tattoos? Well, the brushstroke on the black phoenix tattoo design will leave you amazed. The thick black lines employed to create this neo-traditional phoenix tattoo design are more than just a design. It is an overt expression of one’s bold personality. Its contrast with your skin renders this fire phoenix tattoo pleasing to look at and also offers a sense of balance. You can get the tattoo of this bird on your lower arm, upper arm, thigh, upper back, neck, and abdomen, and wow! The phoenix tattoo design created with delicate delicate tattooing skills and a keen eye indeed is magical and ethereal. So, all in all, this phoenix rising silhouette among all the phoenix tattoos is a whole mood. It looks marvellous as a wrist phoenix tattoo. Try for yourself!

This watercolour phoenix tattoo depicts a phoenix unfurling its wings proudly, manifesting the impressive nature of the mythical creatures from Greek Mythology and symbolizing their full-blown flight into new beginnings. It is indeed a standalone piece, concentrating on the phoenix that gives a slight impression of a dragon as well and is etched in shades of red and crimson. The watercolour exactly employed to create this phoenix tattoo renders it a dreamlike effect and illusion of movement, making it popular for fantasy imagery. The muted and bright hues are blended to forge unique phoenix tattoo ideas, thus, no two watercolour tattoos appear exactly the same. The best placement positions for this one tattoo among other tattoo ideas are the back, wrist, thigh, arm, and abdomen.

Japanese phoenix tattoos depict this mythical bird with values like benevolence and righteousness. This bird looks great on the arms, back, chest, and other parts of the body. The feminine phoenix rising tattoo small displays the avian and reptilian features. The bold strokes of phoenix feathers are drawn with intricate details, and in dotted style with shades of black. This phoenix bird tattoo idea seems to contain the fierce nature of a phoenix that is ever ready to rise from its ashes. Often the wings and tail of the creature serve as the tattoo flourish, which sometimes looks similar to modern geometric design staples with extra focus on negative space, symmetry, and shades.

This is one of the rarer phoenix tattoo designs which is feminine in nature. The bird can be seen rising above signifying growth. A person who has overcome hurdles in their life can think about getting this inked on their body. It is a cool body art that can accentuate the personality of a woman. You can flaunt this small feminine phoenix tattoo idea tattoo on your back, abdomen, shoulder, arms, and ribs and see how it gains admirers! Since this phoenix tattoo is small, you may choose to cover it up or even flaunt it when you want.

For more tattoo ideas, you can check:

What is a feminine small phoenix tattoo?

A feminine small phoenix tattoo is a popular and meaningful design choice for women. The imagery of the phoenix, rising from the ashes, can be interpreted in many ways. It symbolizes a new beginning, rebirth, strength and resilience. This type of tattoo typically features a stylized version of the phoenix with delicate lines and vibrant colors. It is often placed in an easily visible spot on the body, such as the shoulder or upper arm.

What are the benefits of having a feminine small phoenix tattoo?

A feminine small phoenix tattoo can be an empowering way to express yourself and show your strength. The visual of the phoenix rising from the ashes is a reminder that no matter what challenges you face in life, you have the power to overcome them. It serves as a constant source of motivation and inspiration. In addition, it’s a beautiful and meaningful design that will last a lifetime.

How does one get a feminine small phoenix tattoo?

Before getting a feminine small phoenix tattoo, it is important to research and select an experienced artist who can create the design you want. Make sure to ask for examples of their work and discuss your specific requirements. Once you find the right artist, they will be able to guide you through the process, including any necessary preparation and aftercare instructions. Lastly, make sure that you are comfortable with the chosen design before getting inked.

The process of getting a feminine small phoenix tattoo can be a rewarding experience, so take your time to find the right artist and get the perfect design for you!

What are some ideas for feminine small phoenix tattoo designs?

Some ideas for feminine small phoenix tattoo designs include a minimalist phoenix with simple lines, an abstract design featuring colorful geometric shapes, and a realistic-looking firebird with detailed feathers. Another option is to incorporate other elements into the design, such as flowers or gemstones. If you’re looking for something more subtle, consider adding the phoenix to a larger tattoo design. No matter what type of design you choose, make sure it has personal meaning and reflects your unique style.