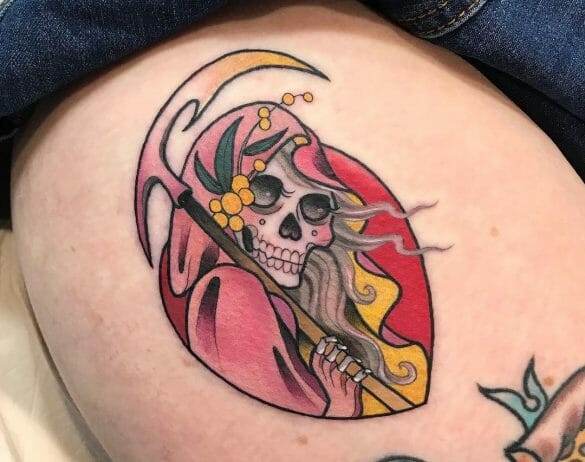 Searching for a cool idea to style the traditional grim reaper? An eye-catching female grim reaper tattoo is variation breaking stereotypes punched together!

Conventionally, the “grim” in grim reaper tattoos are brought into life (well, in death actually) with the bleeding scythe and a ghastly image of the grim reapers. But to be true, even those tattoo designs were so abundantly inked that they entered the mainstream.

Enters the female grim reaper to the rescue. Like the age-old designs, the female grim reaper represents death and mortality, but with an added edge that appeals to the people who try to break traditions. Various cultures fear the grim reaper for they associate its symbolism with the image of the fourth horsemen amongst the four horsemen of the apocalypse, meaning to bring forward death and destruction. To ease this grim quotient, most female grim reaper designs are overly sexualised images with ample breasts, hourglass bodies, and occasionally adorned with ornaments. These elements when tattooed by a good tattoo artist become an air-brushed portrayal of the soul-hungry, ruthless skeleton. The female grim reaper thus reaps in the same way as her male counterpart but while making an attractive appearance, and a stylish, statement tattoo design. Keep reading to learn the many ways you can craft your female grim reapers and book an appointment soon!

The most commonly used trope that fills up the internet- the trope of pin-up girls. The skeleton is barred for a fleshy body with full hips and breasts holding a bloody scythe as a symbol of its identity. She also holds a rosebud, hinting at the fact that this reaper does her job with grace. The red in her stilettos, belt, and lips pop up against her black robe and grey legs, providing with the design a balanced supply of colour.

Well, what do we know about the affair going on beneath the covers? The tattoo artist imagines what goes on inside the hooded cloak and paints a rather playful image of the reaper. The reaper is truly grim with her black ensemble and the razor-sharp scythe but her behind is comically lifted showing a black thong and long, bare legs. The overall presence of black ink in the tattoo design allows more attention to the peculiarity, presenting a shocking image that nobody will be ever prepared for!

Fear the reaper? Nah, you will love this reaper! The artist bends the long scythe and merges it with the grim reaper’s profile to form a heart shape. Akin to the traditional tattooing techniques, the grim reaper is drawn with vibrant colours, bringing the dead to life. You can place these small grim reaper tattoo designs anywhere you please, but it must have good exposure to show off to the world.

Do away with the fleshy skin and keep the original image of the boney grim reaper. This grim reaper appears bejeweled with a number of shiny rings, tiara, and other accessories. Instead of the dark, shadowy hell, this grim reaper has a halo behind its head, possibly meaning to function as noble and divinely sanctioned when carrying souls. The detailed shading fills the requirement of colour, complementing the skull and other elements of this grim reaper tattoo.

Tattoo artists often mix n match with things that seem unrelated but when taken together form well-thought tattoos. The artist here displays a collaboration between The Scream and the grim reaper. The reaper with the Scream mask and the sharp scythe looks every bit of scary that you would expect from such a cool reunion. But it is the fishnetted legs that determine that it is rather a female reaper in black high heels. It is a fun addition and at the same time contains meaning- a curious combination that people opt for. You can place this tattoo on your limbs for the appropriate area and style.

Hey! We never said that female grim reapers are not wicked! Holding a crystal ball in her hand, the crooked reaper is as if offering us to see our future that is written by her, inevitable to bring about death. Tattoos like this one are particularly great for they represent death as it is famously portrayed in the traditional tattoos but with cool additions to their art. Here, the pink-hued flower acts as such an embellishment, complimenting the skull against the overall black hooded robe. You could also add a full moon to such a witchy grim reaper and further accentuate the ominosity of your grim reaper tattoos.

Re-imagining the representation of the female grim reaper in many tattoos, this artist has removed her far away from the dark reality and depicted the woman through the lens of art. This out-of-the-world representation of the grim reaper is due to its lightly shaded body and scythe. What makes it more appealing is her red hair on a well-crafted face instead of skulls- a symbol that perhaps hints at the beauty and grace of death. The smoke trail behind her does a great job of covering up the negative space while keeping up with the theme. Such a tattoo is fitted for women with red hair themselves, for it would be an awesome link to the person’s life, and for people who are drawn towards experimentation in general.

When a super cute Hello Kitty is on the mission to take souls, we’d say it’s just to die for! This grim reaper tattoo is far from being grim and jeopardizes all meanings associated with the image of the reaper. The signature bows and red sparkles further comment on the cuteness quotient, increasing its appeal exponentially! This tattoo is apt for people with a jovial persona, who humor life, death, and all such complex concepts with their perspective. Place this small guardian-of-death tattoo anywhere on your body with good exposure and watch the heads turn anywhere you go!

The first glance at this design fails to recognise the many details that the tattoo means to showcase. Looking closely will reveal a layer of meanings and symbolism associated with the grim reaper and the snake lacing its scythe. There are also two raven skulls that lie below, that along with the snake, and the skinny stature of the reaper presents a disturbing visual that hits at the true essence of grim reaper tattoos. Blackwork and shading are primal to such monochromatic pieces, so make sure to find yourself some good tattoo artists for a gratifying experience.

Allude to the iconic Betty Boop with your grim reaper tattoo while presenting a groundbreaking work of details. The design features a prominent Betty’s face and a scythe, while the rest of the tattoo is inked in flames. The orange fire glow that appears near her feet seems to have inflamed the black robe but without disintegrating it. This fabulous way of designing a female reaper does more wonders than the solid dressing in black. Betty’s face is characteristically crafted with plump cheeks and red lips, being true to her signature comics’ portrayal. Try this design with some of your favourite women characters or animations and embark on a journey of being awesome!

The female grim reaper revamps the old-school tattoo design to match the demands of contemporary times. It is interesting now more than ever to style such a tattoo owing to the multiple popular characters in fiction that can work efficiently as inspiration while keeping the traditional meaning intact. Now that you know all about female grim reapers, wait no more and contact a tattoo artist at the earliest! But if you are still confused about where to start, here are some more female grim reaper tattoo designs that will surely aid your brainstorming: