10 Best Felix Felicis Tattoo Ideas That Will Blow your mind! 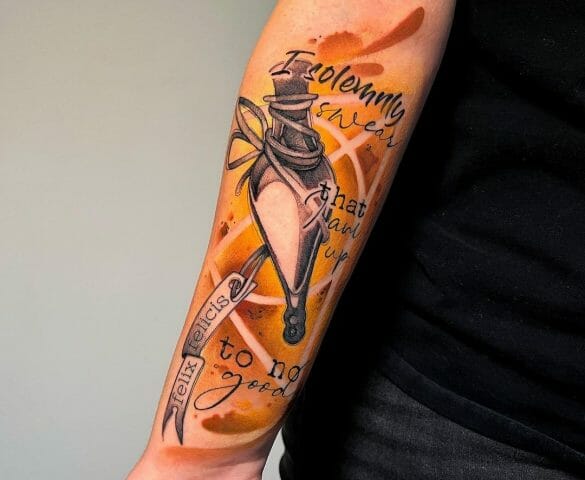 Felix Felicis tattoos have been popular among Potterheads since forever. Hence, this list of tattoos of the notorious potion is a must-read for all the fans.

Harry Potter by J.K. Rowling has been one of the most celebrated franchises of all time.

Felix Felicis or “Liquid Luck” is a luck potion that has been mentioned in the Harry Potter series quite a few times. As a matter of fact, it was revealed early as the title of one of three chapters of the book “Harry Potter and The Half-Blood Prince”.

It could be assumed every Harry Potter geek is aware of the famous potion. The world in Harry Potter introduces us to this magical Potion invented by Zygmunt Budge during the 16th century that made the drinkers lucky and gave them the power to be successful in everything they did at that given time. The idea was immediately appreciated by fans all over the globe. Soon the concept of Felix Felicis tattoo design became quite popular among the Potterheads, as many tattoo Felix Felicis and use it as a lucky charm even today years after its introduction. So if you are a fan of this tattoo concept, then the content of this curated list of Harry Potter luck potion tattoos is just right up your “Diagon” alley.

A love potion was a potion used in Harry Potter to make someone fall in love with the person giving it. As defined previously, the luck potion was used to achieve success by the drinker. These two potions are the epitomes of luck in different spheres. Combining these two in one cute small tattoo is adorable and would bring great luck to the believers. So if you are a person who loves simple and minimalistic yet detailed designs, this would be a great one for you.

If you are in search of some inspiration for a luxurious bottle for your luck potion, then this golden Felix Felicis bottle is the one for you. This potion bottle tattoo was able to portray the absolute beauty of the gold potion. The masterful golden shading and intricate details of the bottle are amazingly and skillfully done. So, make sure to find a capable artist.

There are several crystal loving Potterheads out there who will surely be content with this liquid luck tattoo. This gorgeous tattoo with a crystal cap and colourful sparkles surrounding it would most definitely be a match for you if you are one of them. It gives off a gorgeous royal vibe to the design. The colours of the potion inside the tube also create a beautiful ombre look. Let your heart follow its own path and see your luck unravel!

Luck does not always work the way we want it to work. This potion bottle tattoo with the yellow liquid Felix Felicis or liquid luck will surely bring your luck into action, if you believe in it and especially if you are a Harry Potter fanatic. The details of this minimalistic tattoo that brings out the characteristic of the magic bottle are quite hard to replicate due to the confined space. The little added sparkles capture the magical aura of the potion.

This Felix Felicis tattoo American classic themed with charms like hearts and rainbows is associated with luck as you get to experience all these only if you are lucky enough. The colour purple is mainly associated with royalty, power, creativity, wisdom, mystery and magic. Hence using this colour surrounding the bottle could simply represent the purple colour like aura of the potion. It blending with the background aura creates an Ombre effect.

This Felix Felicis Harry Potter tattoo is a simple one but quite detailed. The unevenness of the potion, the details in the rope with the tag that says “Felix Felicis”, the detail of the glossy effect in the vial and every other small detail are very thoughtful and add the essence. The little sparkles around the potion bring out the magical aura, while the tag gives off a vintage effect. You might have found the one if you were searching for something that would highlight the age of the potion.

Time turner, a magical device that allows the owner to time travel was formerly owned by Dumbledore, which he later gave to Hermione. While the “liquid luck” is the magical element that helped the drinker with their luck. Hence putting both of the elements in one tattoo with the flower and purple smoke add to the magical aura and significance. It could portray the desire to turn back time and use the luck potion to be successful in things you wish you were successful in.

Even though colour tattoos are on the trend, black and white ones will always remain iconic. Hence, done in the iconic black and white theme, this tattoo is anything but monotonous due to the intricate details used to make it. The flowers and the Herbs with the potion could be the ingredients used to make the magical liquid. Although done with minimal colours it doesn’t lack interest and is a great design.

Another black and white themed tattoo, this time only with the herbs is a great concept tattoo. The little dots added to make the liquid is a very unique concept and has originality in it. If you choose this tattoo, you can add your charms, change the design a little bit and add colours of your choice to make it more personal. It would be a great design idea that is not over the top but a simple one to use your little lucky charm.

This tattoo screams “Harry Potter” in every way possible. It has all the otherworldly ingredients of Harry Potter. From Hogwarts letter to platform number to deathly hallows and more, it has almost everything. All these coming out of the magical purple smoke of Felix Felicis potion. A great tattoo concept if you want all Harry Potter characteristics in one. You can always add more to the design.

If you have found inspiration for your next ink from this list of Harry Potter felix felicis tattoo designs, then follow your heart, add some sparkles of your own and go for it.