10 Best Fear No One Tattoo Ideas That Will Blow Your Mind! 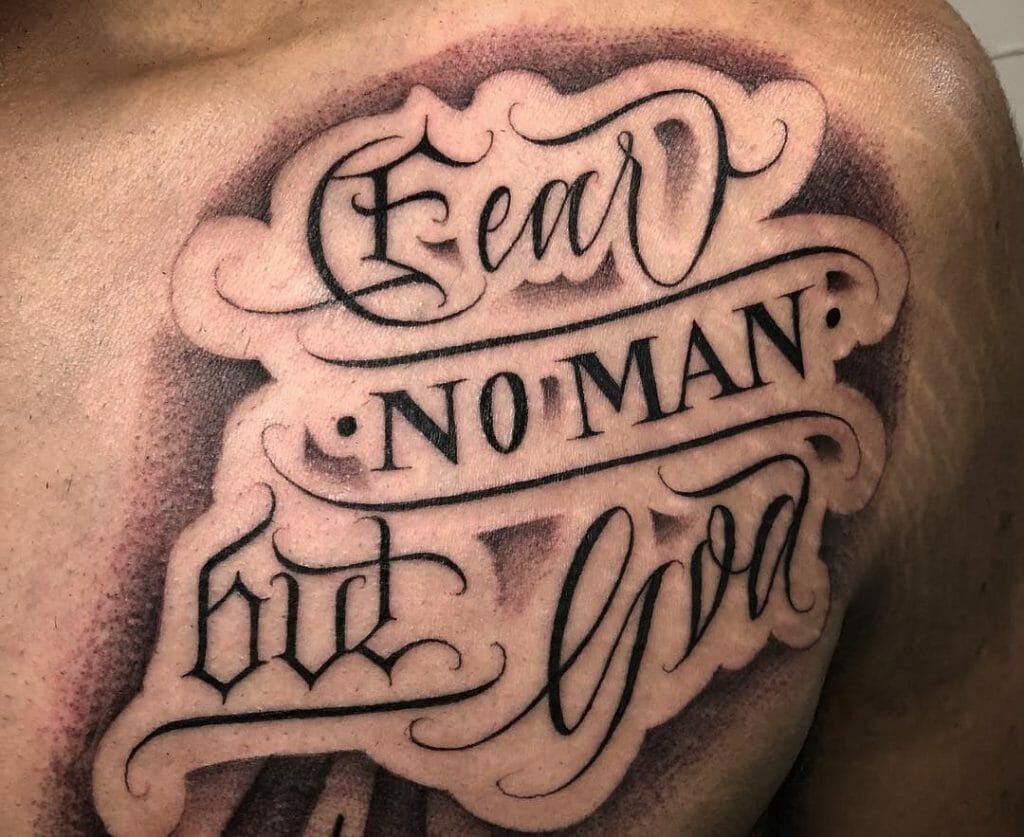 Looking for a fear no one tattoo to express your courageous self on your skin? Here we have some impactful quotes turned to tattoos to show you how it is done!

Phrases like “fear no man,” “fear no evil,” “trust no one” quotes and the like are getting all the more attention with people hell-bent to post their personal turmoil on their bodies.

If you have seen a “fear no man” tattoo on someone, it perhaps indicates that they have been vehemently judged and critiqued by men who wanted to bring them down. More often than not, these quotes are inked by men and women who have been thwarted but survived the downfall and want to tell their story with body art.

Fear changes people, making them restrict their actions with the idea that to submit is the way to acceptance. But success stories are written by people who mustered up the courage to take a stand for themselves and filled the pages of history. If you are such a person who has defied the conventional ideas and fear no man, a no fear tattoo is an appropriate choice. Keep reading to find the many ways to style this tattoo trope and get inked with something that adds value to your being!

Fear None Tattoo With A Skull

Channelise your bold persona with this rad tattoo design featuring a skull. The skull here is being thoroughly pierced with a sword, an indication of butchering fear towards anything and everything. Adding labels that read “fear no one,” “fear no evil,” or “fear no man,” are particularly helpful in segregating these kinds of tattoos, as the artist has so effortlessly done here. The bits of red in the overall black and grey design also enlivens the idea, making it a stark reminder to fear no man.

Trust No One Fear Nothing Back Leg Tattoo For Men

Men can also opt for full leg-sleeve tattoos to display no fear quotes that comment on their ideas, simultaneously making a stylish tattoo. Experimenting with three different fonts to note the phrase, the tattoo artist makes a bold show of the wearer’s fearless persona. You could also opt for a “trust no one, fear nothing” back leg design tattoo in medium fonts to deliver the same message without having to join in with such flamboyant means of expression.

Fear No One Tattoos With Tiger Eyes

The tiger is a globally known sign of fearlessness, its eyes further powered with the fuel to conquer all fear and evil. Here, the body art guru presents a hyperrealistic portrait of the tiger’s eyes like we majorly see in pictures. The rectangular-frame tattoo placed vertically on the forearm comments on the similar nature of the animal and the wearer, simultaneously making an amazing design that is not so heavily dependent on quotes. Both guys and girls can easily go for this fear no man tattoo that is filled with courageous spirits and encompasses layers of meanings without the use of many words.

A striking representation of fearlessness, this tattoo is a must for the girls people would wrongly accuse of being too soft. The tattoo artist takes the most common arachnophobia to convey this message by making the spider emerging from the woman’s mouth. As disturbing as it looks, the appeal of this tattoo comes from its intricate shadings. This tattoo would be a direct slam at the people who dare to judge without knowing the story behind a person while making a statement tattoo on the wearer.

The popular phrase “see no evil, speak no evil, hear no evil” is further improvised by the artist to add to the meanings associated with the phrase. The blindfold in this tattoo says fear in all caps, leading the observer to believe that no matter how daunting and fearful the opponent may be, the wearer must deal with it with their courageous spirits. The man is again inked with focusing only on the bold, black strokes, thereby introducing charisma with simplicity. Outright cancel your fears with these kinds of tattoos that would also boost you with motive while exhibiting. You can also go for “evil” instead of “fear” to hint at the “see no evil” saying.

A simple lettering tattoo has the same gravity as the other, creative designs mentioned here if done right. This inflamed tattoo in black could point at the wearer’s courage after some significant damage to their selves. The flames can either indicate passion or purgation, or the continuity of both. You can also go for quotes like “do right, fear no man” to post on your forearm.

This one is for the humourous guys and girls who have been able to maintain not only their true selves but also deal with their crisis with lightheartedness. This tattoo features an old-school Renaissance angel bending over a grave named fear. The brief popping colours are beautifully contrasted against the underlying grey of the tattoo. You can easily replace the word with “evil” and it would make a splendid show of a tattoo coupled with the angel, or you can go for full phrases like “fear no man,” or “fear no evil.”

Fear No One Sleeve Tattoos

A rad addition to join to your tattoo collection, this enchained skull tattoo appears as if straight out of pictures. Skulls can present various meanings depending on how they are portrayed. Here, the message is of true defiance that imparts this tattoo with an essence of rogues. Ask your body art guru to extend the black and grey shading to craft sleeve tattoos that you would surely love forever!

Fear no evil just got real with a preacher of God who sanctions fearlessness for any being. The message of “fear no man” oozes out of the body language of the nun with her tongue out as if mocking the concept of fear. This fear no man tattoo is a great idea for the edgy believers who would want to revamp their tattoos with faith.

Fear No One Tattoos On Fingers For Men

Finger tattoos are particularly a painful ordeal owing to the lack of fat and flesh over the bones. But you bet how good a finger tattoo looks! The body art guru showcases their maestro by bi-colouring the crooked letters. You can also post this tattoo on the back of your neck if fingers would be a bit too much on your part.

No fear quotes are all over the place with more and more unique phrases coming up in the garb of a tattoo. We suggest you derive references from these exceptional tattoo designs and create your very unique design. And if nothing has matched what you searched for, here are some more tattoo suggestions to help you in the process: