101 Best Falcon Tattoo Ideas You Have To See To Believe! 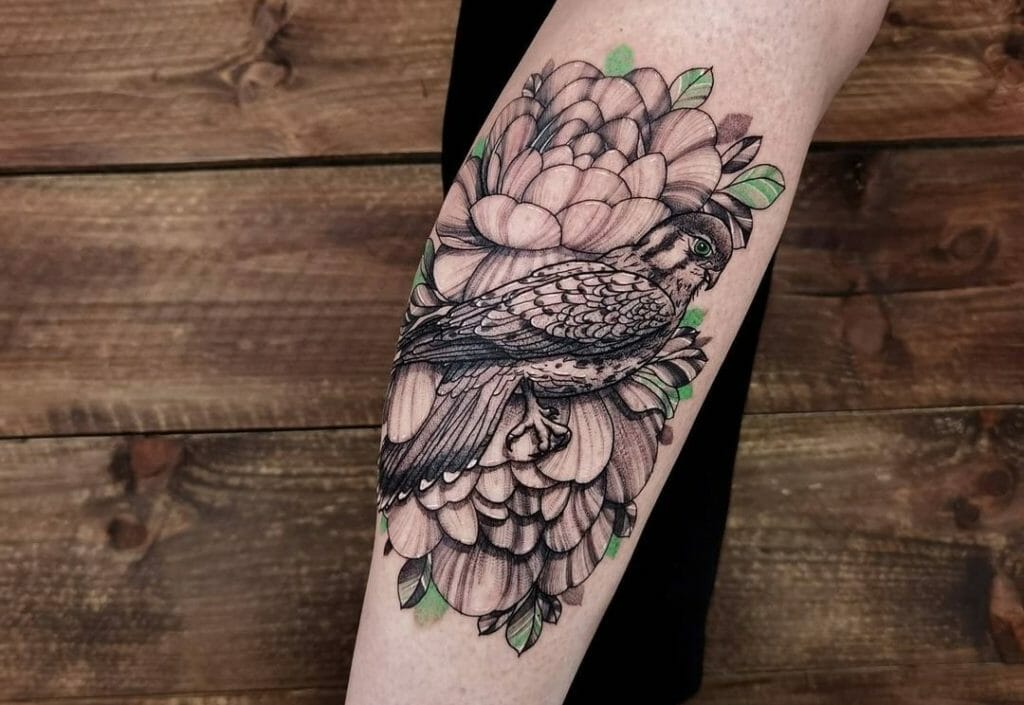 In search of menacing tattoo designs to channelize your strength? Well, we have curated a list of falcon tattoos to help you express your soul on your body!

Falcon tattoos are an incredibly popular style that has been adopted by many people irrespective of their cultural background.

Falcons stand as a symbol of power, intelligence, freedom from ancient times. People today are still fascinated with this bird for its keen sight and strength and tend to adopt its energy by inking the falcon on their skin.

This beautiful and majestic bird has been a point of prime focus in ancient Egypt, Europe, and Nordic cultures. The falcon enjoyed a fairly celebrated stature with the West regarding them as some sort of divine entity who traveled between heaven and earth. Tattoo enthusiasts tend to choose this bird to portray their true spirit in full potential with such a powerful symbol. Keep reading to find a list of falcon tattoos to draw inspiration from!

This tattoo design catches the bird mid-flight with its wings wide open and eyes fixated on its prey. The details on the falcon’s body and wings have been given extra importance with minute line work and shading. This great creature in such a mighty pose is apt for men who are ambitious, fixated on their goals, and make the most out of any given situation.

This falcon emerges from its Egyptian roots accompanied by the symbols of the pyramid and Horus eye. Interestingly, Horus was an ancient Egyptian deity who was depicted as an amalgamation of a man and a falcon and preached till the Ptolemaic kingdom. This shows how popular and strong the influence of Horus and a falcon have been on Egyptians. The design focuses on the eye and could perhaps hint at the eyesight of Horus and the falcon. Owing to its small size, the tattoo can be placed anywhere but is easier to spot on the forearm or the nape of the neck.

The coupling of the falcon with Hawthorne is an impeccable trope to complement the dangerous with the beautiful. The earthy colours used in this image might be meaning to highlight the bond between the bird and nature even though falcons are often considered unworldly. You can place this tattoo on your arm as is shown in the picture, or your back for broader surface area.

This tattoo brings together two very different elements into the picture. The artist presents an interesting conjugation of a woman and a falcon. The two are so inherently clubbed together that there is no sign of differentiation. This tattoo is perhaps meaning to convey the free spirit of the wearer that reaches sky-high limits and refuses to be deterred. It could also be a reference to Nordic history where the falcon was seen as the goddess of fertility and prosperity.

This tattoo design presents the falcon in the light of a god. Its head attempts to conceal the sun and emanates heavenly energy towards the world. The artist has constructed the image with close attention to the perched animal with its piercing gaze. There can possibly be many things that this falcon is able to see- either locating a hunt or even its content spiritual being. This would be a powerful choice for men who love detailed back tattoos.

If you are in search of different, small falcon tattoos without the many intricacies of the bird, this new falcon tattoo design may come in handy. Portraying the strength in the bird’s long stare, the artist is able to spot the true essence without going much into the difficult part. People who always gravitate to smaller tattoos may be able to choose their fit in the popular falcon eyes.

Peregrine falcons are difficult to be inked on the arm with their stature and open wings. Designs that focus on falcons hunting or mid-flight or even gazing at their prey can easily be seen in many back tattoos. The artist here tries to fit the bird in the arm by fine dot work, shading, and outlining in black. The bird is captured in such a position that it seems to radiate a thorough sense of freedom, power, and the spiritual.

The image of falcons in flight is already an intimidating one. The intensity of these birds of prey is further magnified by introducing abstractgeometric lines around its body. This tattoo portrays a falcon speeding down the sky to relish its prey. The head is camouflaged with the black of its body and wings. The bird may be interpreted as the symbol of darkness and would really make a great chest tattoo for people with bold personalities.

This Peregrine falcon tattoo shows a new, even easily attainable falcon right above your elbow. Accompanied by fine geometric lines and dot work, this miniature bird compromises for the grand gesture. If you are a calculated person looking for neat tattoos, you might as well choose this elegant piece.

Falcon Tattoos With A Serpent

This hunting falcon’s image portrays unadulterated power to grab the snake amidst flight, and the boundless spirit that dares to soar above the sky and reach the sun. The vibrant colours in this piece draw much attention to the hunt scene. If you are someone fascinated by the image of prey-hunting, this elaborate tattoo is for you to own.

The motif of falcons in tattoo designs is not a novel idea discovered today. In fact, its long history is a strong hint at the importance of the animal and the tattoo art both at the same time. If you see yourself in the shades of a falcon, here are some more ideas for you to explore:

What does a falcon tattoo mean?

A falcon tattoo typically symbolizes strength, courage, freedom and wisdom. In many cultures, the image of a falcon is a representation of power and leadership. It also represents a connection to nature and the wild outdoors. Falcons are one of the most intelligent creatures in nature, so they can represent intelligence as well as a strong will to succeed. A falcon tattoo can also be seen as a way of honoring one’s ancestors and paying respect to their spirit. The image of a falcon is also associated with protection, so it could represent the desire to protect those closest to you. Finally, for some people, a falcon tattoo serves as a reminder that life is not permanent, and to live it to its fullest each day.

What are the different designs of falcon tattoos?

The design of a falcon tattoo is largely dependent on the personal style and preference of the person getting it. That said, some of the most popular designs for falcon tattoos include realistic depictions of a bird in flight, abstract geometric shapes or symbols such as feathers and talons, silhouettes with wings spread wide open, symbolic tribal designs inspired by Native American art, or a combination of these elements. Depending on the style chosen, a falcon tattoo can appear as realistic and detailed, or be more minimalistic and abstract. Additionally, different colors may be used to create a unique look that reflects the individual’s personality and preferences.

How much does a falcon tattoo cost?

The cost of a falcon tattoo will depend on several factors, such as the size, complexity of the design and where it is being done. Generally speaking, smaller tattoos will be less expensive than larger ones. Additionally, more intricate designs may cost more than simpler ones and can take longer to complete. A good rule of thumb is that if you’re looking for a high-quality tattoo, you should expect to pay between $100 and $300. However, it’s important to remember that the cost of a falcon tattoo will vary depending on the artist and studio doing the work. It’s always best to shop around and compare prices before making a final decision.