10 Best Fairy Wings Tattoo On Back Ideas That Will Blow Your Mind! 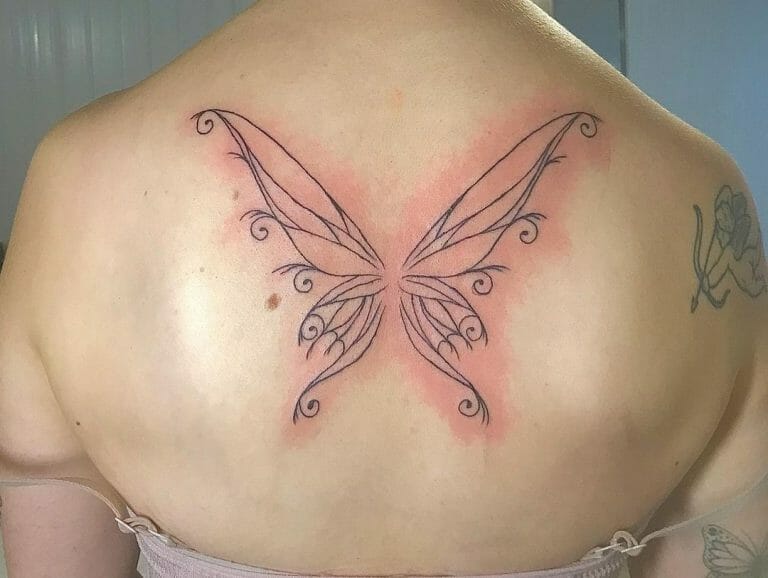 Bring out the magic in you with these stunning fairy wings tattoos on back and fine-tune your already magical personality!

Fairies are transitional beings hovering around the borders that separate the mundane from the magical.

Literary and cinematic discourses are replete with references to fairies, nymphs and sirens. These celestial creatures function as a conduit between the world we live in and the world we desire.

When it comes to tattoos that feature fairies and nymphs and butterflies and other winged creatures, the message encoded is mostly about the elemental connection between man and nature. Wings are the embodiments of freedom and hope, while fairies uphold values such as innocence, chastity, loyalty and perseverance. In a world systematically laid out within the matrix of monotony and mundanity, narratives on fairies and ogres help to restore faith in things the heart believes to be true but the eyes cannot see. Tattoos often help us say that what is inexpressible or untranslatable. Thus, wearing a fairy wing tattoo allows you to cherish those secret wishes your heart makes, to invoke the memories of a time when it felt good to wait for Peter Pan to turn up at your window, to remind yourself every day that good things take time. So, without further ado let us take you through ten dazzling fairy wing tattoo ideas hand-picked while keeping someone just like you, in mind.

This design brings to you a pair of colourful pink and purple based wing tattoos, vividly detailed and enticingly unique. The clarity of the pink and purple wings in this tattoo render the artwork a larger-than-life grandeur. Putting in colours can cause the causal use of images to come to life. Thus, it is advisable to play around a bit with myriad shades to invoke a spirited look.

As children, we often wished we had wings instead of arms so that we could fly away and touch the limits of the sky. The location of these wing tattoos makes them perfect symbols for imaginary wings with which to rise above the quotidian existence into a state of revelling liberty.

Fairy Wing Tattoo To Adorn Your Back

This is a lingeringly beautiful design that demands of the tattoo artist a professional sleight of hand that will make the complexities of the artwork appear profoundly simple.

The tattoo features a fairy with wings as fragile as those of a dragonfly’s, blowing a kiss. Her hair is let loose and it creates an illusion of wave-like patterns after her. The intermittent use of black and white shades invokes an effect that is at once illusory and tangible. The size of the tattoo ranges from small to medium and it is appropriate for flat locations with as many limited undulations and contours as possible. For example, the back portion of the shoulder blades or the thigh or below the nape.

A dazzling couple of tattoos featuring two electrifying fairy wings of equal sizes. The idea of fairy wings tattoo takes on an epiphanic dimension with these designs.

Apart from the ingenious application of black ink to draw the nuances and the intricate circuitry of patterns within the artwork, these wing tattoos manifest striking similarities to real wings. Through a clever turn of the pen, each tattoo wings look as if they have been captured in motion. Such aesthetically profound representation of wing tattoos is rare to come across. Women sporting butterfly-themed tattoos are a common sight but the scope of the symbolism of such tattoos render them an essential gender fluid nature thereby making them suitable for people of all genders.

Gothic Fairy Wings For Back

This is an interesting design that seamlessly incorporates various artistic elements ranging from the traditional to the Victorian into itself.

The tattoo represents a pair of elaborately illustrated fairy wings inscribed upon the back portion of the body in delicate black ink. The grand disposition of the artwork alongside the clever use of space in the design draws the attention of the observers to the curtain style patterns along the edges of the design. The turns and bends of the strokes create an illusory effect that not only attracts attention but also holds it for long after. You can choose to get these enormous wings coloured in pale pastel shades. Like fairy tattoos, these fairy wings exudes a celestial charm that will help you re-connect with your inner mysticism and spirituality.

An essentially minimalist wing tattoo that can be worn either coloured or black and white on any part of the body.

The design features a pair of butterfly styled fairy wings delicately drawn in black ink on the skin so as not to disturb the original tone of the skin. The simple design takes on a profound significance when interpreted at multiple levels and engaged with thematically. The open-ended nature of the artwork allows for experiments with colour, size and shape. The nuanced illustrations adorning the interior of the design is breathtakingly beautiful!

A unique fairy wing tattoo that seamlessly fuses wings of a fairy and a dragonfly to create something that is beautiful and liberating in its originality.

The design embodies a nuanced outline of a pair of fairy wings extensively filled in with details, perched on either side of a spine tattoo that resembles the body of a dragonfly. The wings are magnificent and brilliantly etched in style and grandeur. The tattoo vertically traces the spinal cord thereby making the back appear toned and better shaped. The wings are etched in black ink and left unfilled except for intermittent shadings. One can choose to colour them but then the depth of the black used in the spine tattoo must be intensified, otherwise, the design will fall flat.

Angel Wing Tattoo For Back

A quintessential back tattoo design that features a pair of fairy wings drawn in perfect symmetry. The placing of the wings along the shoulder blades make sure that with movement the contours change thereby rendering the whole design a life-like exuberance.

This is a charming design that features ornamental wing tattoos vividly detailed and boldly expressive. We do not believe tattoos are gendered but this one suits women better because the elaborateness of the artwork demands a shoulder that is broad and less contoured. Since these features are often feminine thus, this tattoo can be precariously labelled under women’s. You can try out this artwork in colour especially pop colours to pull it off in sheer panache.

This is a one of its kind design that embodies a beautiful fairy wing drawn in great detail on one of the shoulder blades.

The divine beauty of the design reminds one of the pages out of a fairytale book from childhood. The wing is drawn in shades alternating between light and dark to allow the depth of the artwork to shine through. Get this tattoo done only on those portions of your body to prevent distortion of the inscribed details. Wings are fragile things that crumble to dust with the slightest touch thus while getting a wing tattoo done one must remember to manipulate colours and ink so that the fragility is reflected in the design. This tattoo successfully manages to achieve that effect. You can also opt for colours to draw the stars which will complement the otherwise black and white inscription of the main design.

Lingering along the line separating the gothic from the macabre, this tattoo features a pair of wings heavily done in black ink poised on either side of a vertical line passing along a circle.

The application of stroke lines within the wings in alternative black and white colours help bring to the surface a bit of the natural skin tone. This idea of incorporating the natural tone of the skin as a part of the colour scheme is unique. Since the skin around the nape portion of our body is usually less tanned, the undertones can stand out. The symbolic significance of the tattoo is hard to pin down owing to its elusive nature. This is an open-ended design that can be interpreted as one wishes to.

This one is a realistic pixie wing tattoo design featuring a delicately drawn pair of wings drawn in the watercolour style, spread out in sheer grandeur.

The meticulous application of stroke lines and the finesse with which the detailing are handled is absolutely stunning. The design embodies a pair of wing tattoo which is subtly dabbed in pale pink. Since most fairy wings tattoos are either black and white or heavily detailed, this one comes across as a fresh spin to the old formula. While on one hand, it signifies the timeless symbolism of wings as bearers of freedom and exhilaration. On the other, the tattoo draws our attention to the contemporaneity of those symbols.

Just as monsters are said to be found under your bed, to seek fairies you must look inside your head. While the world runs by your window, sit back, give yourself a chance and let the magic happen. With fairies and butterflies fluttering about you, revel in the glory of the inconsequential beauty of existence and the foolish meaninglessness of it.

Apart from the wing tattoo ideas included in the list above, you can also check out the following designs: