10 Best Fairy Tattoo Ideas You Have To See To Believe! 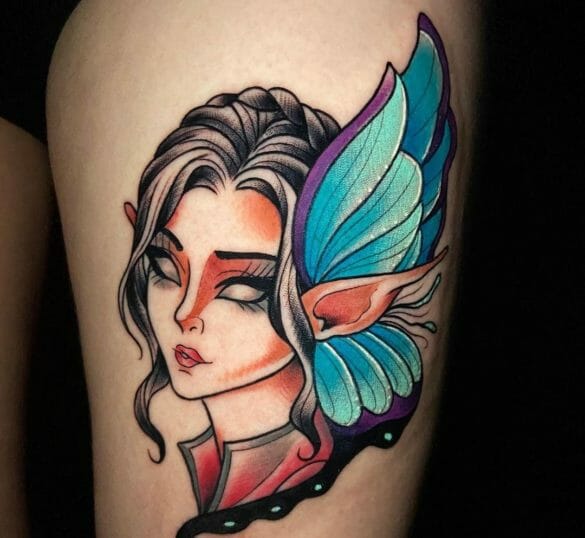 If the word ‘fairy’ makes you nostalgic for your childhood, then this magical list of fairy tattoos is definitely for you.

The concept of a fairy as a mythical creature has existed in many of the major European traditions and beliefs.

The fairy takes different forms in various cultures from malignant beings to wise and ancient creatures that graced the Earth even before the first human being. However, owing to their varying forms across different cultures, it is very difficult to determine a single source of origin for the fairy.

As children, all of us have read books, heard stories, or watched films centring around fairies. The very word ‘fairy’ is sufficient for us to take a trip down memory lane, revisiting the afternoons spent bending over books of ‘Peter Pan‘ and ‘Cinderella’ or watching Disney’s cinematic adaptations of the same. However, all fairies were not Tinkerbell or the magical godmother of Cinderella and the concept of fairy did not always exist as it being cute and a creature of beauty. While the Pagans looked upon fairies as goddesses and guardians of the universe, who were the first to walk on the surface of Earth much before the first human, their beliefs did not stand the test of time. Medieval societies, as well as 17th century Christians, were afraid of fairies and ostracised them as evil creatures and messengers of the Devil who sent them on Earth to spread illness among mankind and steal infants. Even this dogma surrounding fairies did not last with the theosophists of the 18th century deeming these creatures as kind-hearted and considerate spirits and Christians seeing them as fallen angels trapped in between heaven and hell. With the dawning of the Victorian Age, the fairy as we know it today can be finally traced back to – minute human-like beings that possess wings and a tiny magical wand in their hands. The negative connotations surrounding these mythical creatures were slowly diminishing, as can be seen in William Shakespeare’s phenomenal drama ‘A Midsummer Night’s Dream’. But it was Walt Disney who ultimately imprinted the idea of the fairy as a cute, magical, and playful creature in our minds, with his animated films.

So what do fairy tattoos symbolise? Fairies are ancient mythological beings ladened with deep-rooted cultural symbolism and rich historical traditions. They are a powerful symbol of femininity, freedom, and connection with nature. If you want to relive those lazy afternoons filled with magic and stories, be sure to check our specially curated list of fairy tattoo ideas.

Originally created in 1904 by J.M. Barrie for his play ‘Peter Pan’, Tinkerbell is one of the most famous fictional characters immortalised by the 1953 Disney film. The tiny fairy earned so much popularity in her maiden run that she ended up with her own film series and even became the unofficial mascot of Disney (yes, that small fairy sprinkling magic dust on the ‘Disney’ logo is her!). You might have come across various renditions of Tinkerbell in numerous films and animated series, including Steven Spielberg’s interpretation of the cult classic which was called ‘Hook’ and where Julia Roberts portrayed the feisty little fairy. However, the 1953 portrayal of Tinkerbell in her green clothes and blonde hair was the one that remained imprinted in the memory of the fans and this fairy tattoo design recreates the same. Get this Disney inspired fairy tattoo on your arm as it is quite a complex tattoo design and the artist will require ample space to execute it perfectly.

Gothic Fairy Tattoo Design On Back

Not all fairies are depicted as of cute and playful nature. Generally, most of the traditional fairy tattoos feature a cute fairy or a magical fairy, but some prefer darker and gothic portrayals. For such goth fans, this gothic fairy tattoo design is a must-have. Medieval society and 17th-century Christians ostracised the fairies as feminine evil beings which spread diseases among men and this particular portrayal depicts the fairies in that same manner. This particular fairy tattoo design not only shows the fairy in gothic fashion but the torn dress, ruffled wings, the tiara made of vibrant red roses and smudged lips lend a certain sexy and sensual connotation to the design. If you identify yourself as a rebel who does not pay heed to the rules laid out by society, this fairy tattoo design contains elements that will surely get your attention.

Well, fairies have their own colourful wings to fly around, but pairing them with those of a butterfly make it a magnificent combination. One of the most popular choices of tattoo designs among women, the traditional butterfly tattoo is usually associated with all feminine qualities as well as love, hope, and endurance. The beautiful butterfly tattoos are also representative of innocence and nature and coupled with fairies, the tattoo designs symbolise freedom, beauty, and grace. While this particular fairy tattoo requires a little more space to be executed, there are numerous small butterfly fairy tattoo designs available that can be done on your wrist or the back of your neck. Tattoo this fairy tattoo design if you have recently recovered from a tragedy or loss since these designs represent transformation and rebirth, just like how a butterfly experiences a phase of metamorphosis.

The concepts and ideas of the beautiful and cute fairy that we know today can be traced back to the advent of the animated films of Disney. ‘Cinderella’, the 1950 animated movie, is another monumental work by Disney that a whole new look to our favourite fairy tale. The epic work has been the basis for numerous series, films, comics later on and thus it was expected that the tattoo artist community will come up with designs to pay homage to Walt Disney’s creation. Cinderella and her evil stepmother stood back to back while her fairy godfather flies over the castle casting spells and sprinkling magic dust. However, the charm of this fairy tattoo design lies in the detailing and will require ample skin space to be done perfectly. Keep this in mind and discuss this over with your tattoo artist while going for this one.

While most of the images of the tattoo designs on this list demand a whole lot of money, time, commitment, and skin space to be executed perfectly, we know that it can get a little too demanding for first-timers or those on a tight budget looking to get inked. Do not fret, for we have you covered with this minimal fairy tattoo design that will require not much of any of the above things but will still lend you a fashionably neat look. This infinitely cool tattoo of a tiny beautiful fairy whose wings are in the shape of a blossoming lotus flower will require very little body space, and hence can be inked on your wrist or neck quite easily, saving you money, time, and a whole lot of pain.

Tribal tattoo designs find their roots in various cultures and native regions worldwide and usually carry spiritual significance for those who ink them on their body. Coupled with a fairy, these traditional tattoos take on a whole new meaning that signifies a fusion of the myths and legends of ostensibly unconventional worlds. The tribal fairy tattoo designs are commonly associated with your ancestry and close rootedness to Nature, life, femininity, and a specific culture or tradition. These fairy tattoo designs are usually done with classic black and white ink colours that also give a rustic look to the designs.

Fairy wings tattoo is in rage among women lately, with many getting a pair of beautiful fairy wings as their preferred piece of body art. The idea of a fairy wing tattoo is to lend a certain elegance, grace, and beauty to the women sporting them and is certainly an eye-catching addition to their personal style. Tattoo this fairy design if it suits your personality and you are comfortable.

We all know a person or two who prefers minimal tattoo designs over complex and flashy ones. For them, possessing body art is a very personal choice that does not need to be shown off to others. Even if you are this aforementioned person, this simple outline of a fairy tattoo design is perfect for you. It depicts the same playful fairy as in other tattoo images on this list but the minimal design and the bare outline of the beautiful fairy make the tattoo perfect for those who prefer simple designs, are getting inked for the first time, or are on a shoe-string budget.

Just like those of the medieval society, 17th century Christians, or the celts, the idea of fairies greatly differed according to Pagan culture. They considered the fairies as the first beings to walk on the surface of Earth, long before any mortal and looked upon these fairies as goddesses and guardians of the universe. And just like the aforementioned beliefs of different cultures over time, the Pagan belief centring the fairies also did not stand the test of time. Recent occultists also associated fairies with sensual mythical women who lured men into traps. This specific fairy tattoo design combines all the above beliefs to create this fairy with blueish-green wings and hair let loose like the Greek goddess, Medusa. Coupled with bluebirds in the background as well as sparkling stars, this body art is a piece of beauty and something to be flaunted casually.

So how much does a fairy tattoo cost? Like all other tattoo designs, you can draw a rough estimate of the cost depending on the size and design of the tattoo you choose as well as the location and expertise of your preferred tattoo artist. Fairy tattoos have been in vogue for a decade or so, and judging by their popularity they will continue to be so. Fairies not only embody the feminine aspects and are preferred by women solely, but also by almost everybody, irrespective of gender and age, as they bring back a wave of nostalgia and childhood memories. You can choose your fairy tattoo design from the specially curated list above but also look for other choices, consulting with your chosen tattoo artist. Some other fairy tattoo designs you can try are –