10 Best Ellies Tattoo Designs That Will Blow Your Mind! 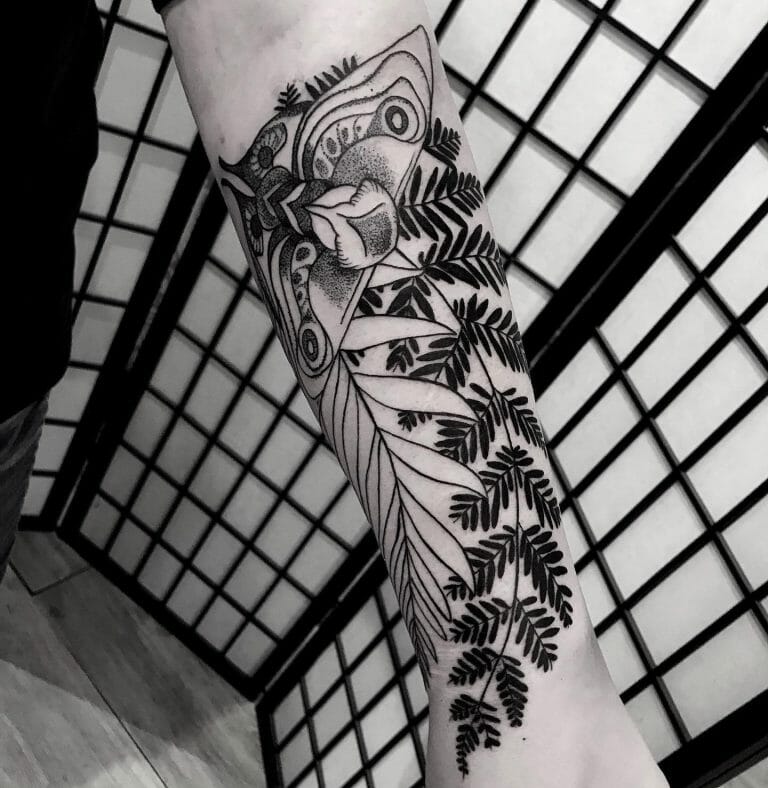 A fan of The Last Of Us parts I and II? Here is a way for you to showcase it. We have a list of variations of Ellie’s tattoo perfect for you!

One of the most defining characteristics of Ellie’s model in the game, the Last Of Us part II is her tattoo.

This is a tattoo of a Fern and a moth that covers her forearm. According to Naughty Dog, the developers, this tattoo was not chosen for the aesthetics of the character by the game developer, however, it was chosen for its symbolism.

The Last of Us Part 2 is a very intense game that is full of violence, the pursuit of revenge, which is inescapable, and death. Each character of the game is very driven. The tattoo, however, holds a lot of importance because the gaming studio asked for outside consultants’ help to make this design. This tattoo was designed by a tattoo artist from California, Natalie Hall, who was invited to the Santa Monica studio of Naughty Dog to find the right aesthetics for the design. Everything about this game requires a lot of detail, and it will definitely leave behind a legacy. Naughty Dog is known for its games, which not only are incredible video games but also put forward a story that is meaningful.

According to the game, the tattoo features a fern and a moth. The game director, Neil Druckmann explained the layers of the meaning of this tattoo. Generally, moths especially hawkmoths are a symbol of death. Hawk moths have a skull pattern on their backs. According to the game, this tattoo on Ellie’s hand depicts the revenge she wants to take for the death of Joel. If you have played the game before, you will see that the loading screen has an image of a moth flying towards the light, that is the symbolism of the relationship between Joel and Ellie.

We have combined a list of some of the most amazing variations of Ellie’s tattoo. Select the best one according to you and make your next body art.

Ellies Tattoo -The Last Of Us

This design is a beautiful variation of Ellie’s tattoo. This tattoo features a fern and a moth, just like Ellie has. A fern tattoo symbolizes eternal youth. They are also a representation of future generations and families. A moth is generally symbolic of death. However, some moths are symbolic of change, rebirth, transformation, and resurrection. When these two tattoos are combined, they create a beautiful meaning. For Ellie, this tattoo is a constant reminder to take revenge for Joel’s death. For you, it could mean something totally different.

The tattoo artist has made a larger version of the original design on the forearm of the wearer. They used colors like black and grey to complete the design. Most part of the tattoo has been completed using fine line work. Some areas also have dotwork. This tattoo has been made in more than one sitting and since it is placed on the forearm, it is not very painful.

The original Ellie’s tattoo is generally wrapped around the arm like a sleeve. In this tattoo, there’s a very slight change. The moth is very large and highlighted and the fern in the background is very small. For a long time, moths were seen as unlucky and were considered very closely linked to death. However, that has since changed. Today a moth tattoo is a symbol of metamorphosis and transformation.

In this particular design, you see a large moth tattoo on the forearm. The tattoo artist has used black ink to complete this piece of artwork. There are some fascinating shapes on the back of the moth. The artist has used fine line work and dot work to make this design. This is a fun adaptation of the original design.

This design is a very accurate presentation of Ellie’s tattoo. Initially, we see that the moth and the Fern tattoo is only on her hand, however slowly, as the story develops, we say that the moth also features on her guitar, which was actually a gift from Joel. The image of the moth has captured the relationship between Joel and Ellie in a great way. The moth design appeared to be so beautiful and relevant that Naughty Dog decided to feature the moth on her guitar in the shots at the beginning and the end of TLOU II.

Just like the other designs, this design has also been made completely in black ink because that is similar to the original design. The artist has used fine line work to complete this tattoo. The back of the moth has some intricate and beautiful shapes on it. This is a very cool piece of body art, especially if you are a fan of the last of us.

In the Last of Us part I, we see the relationship between Joel and Ellie develop. From being strangers to saving each other’s life, they came a long way. After Joel’s death, Ellie needed a constant reminder to take revenge. This moth reminded her of Joel and their old life together. This beautiful design was her tribute to Joel.

This particular tattoo has been made in black ink, with shades of grey on the back of the moth. The artist has used fine line work and dot work to complete the tattoo. If you are looking for some designs that will be a constant reminder for you of a deceased loved one, this design is the perfect idea for you.

While talking to the Washington Post, the Naughty Dog director Neil Druckmann said that Ellie made this tattoo to cover up a bite from the previous season. Joel had warned and heard that the bite could be dangerous. Therefore, Ellie attempted a chemical burn. She then had to hide that to conceal her immunity. That is when Naughty Dog decided to make a tattoo that would be appropriate to conceal the design as well as mean something to the story.

This particular design has also been made in shades of black and grey. The tattoo artist has used a line work design to finish this tattoo. In this picture, the tattoo has been warned on the left hand as opposed to the right hand which was the original placement of the tattoo on Ellie.

The moth design has completely changed the way people are viewing this tattoo. The idea behind the moth was something being drawn to light and constantly pursuing their goals. This is also where the idea behind the loading screen developed. The loading screen shows marks being drawn to light. However, in the first game, it just looked like spores.

This particular tattoo is another beautiful representation of Ellie’s tattoo. The tattoo artist has created this design with fine line work and dotwork. They’ve added shades of black and grey to give this design more element. Just like the original design, it has been placed on the forearm of the person. If you are a gamer and obsessed with this game, this tattoo is the perfect design for you.

In the first game, Ellie was shown as a young teenager who just came to know about the atrocities of her world. Joelle had helped her through those atrocities. So he was one of her best friends. To lose that best friend was very shocking for her. She needed a constant reminder, and this tattoo of the moth and the Fern was a constant reminder for her.

The tattoo artist has done a tremendous job in this design. They have made the moth with a dot walk pattern and it looks absolutely realistic. The shades used to complete this design, or black and grey. If you are a fan of the Last of Us Part 2, then this design is perfect for you.

Last Of Us Part II

If you are an obsessed gamer and want to show off your love for the Last of Us Part 2, then this design would be one of the perfect designs for you. Not only is this design the perfect copy of Ellie’s tattoo, but it also has a deep meaning attached to it. If you share the love of this game with your friends, you can also get matching tattoos. This particular artwork has been completed in black ink with fine line work. It is a perfect representation of Ellie’s tattoo.

This design is one of the best representations of Ellie’s tattoo, especially if you are an obsessed fan. This tattoo is very similar to the original design the tattoo artist has used fine line work and artwork patterns to complete this design in black ink. This design is like a house sleeve tattoo that is wrapped around the forearm of the wearer. However, you can make a smaller version of this design and place it on any other body part.

We hope that you like the designs mentioned above. The traditional placement of this tattoo is on the forearm because that is where Ellie’s tattoo is placed. However, you can make variations of this design and place it on any other part of the body. You can also add colors and other elements to this design to make it more personalized. This tattoo is not only related to the game, but it also has a deeper meaning attached to it.

Some other tattoos that you can go for are:

10 Best Back Pieces Tattoo Ideas That Will...