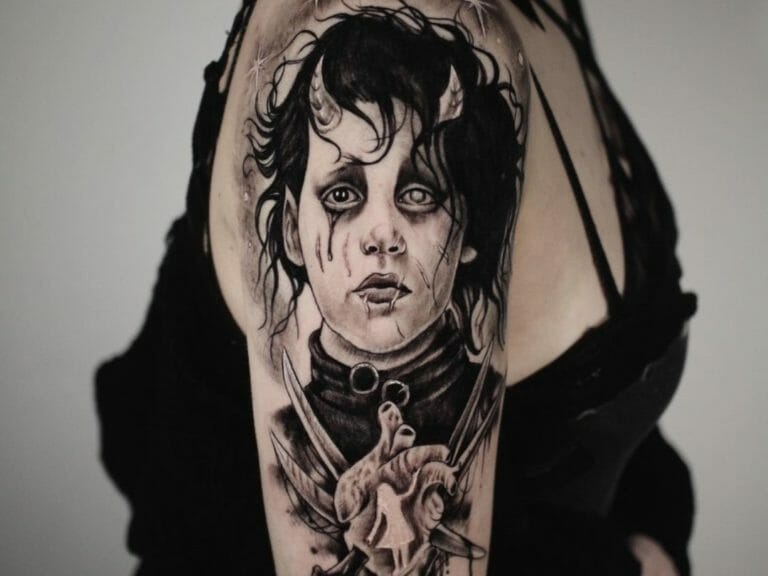 Looking to get tattooed with an Edward Scissorhands tattoo? Find great tattoo designs that have over have been popular in the world of tattoos!

Edward Scissorhands was created by the renowned Tim Burton and was released in the year 1990.

The story follows the life of Edward Scissorhands who was created by an inventor who gave Edward scissors for hands. Many years later, Edward is visited by a saleswoman who finds him all alone in his large castle and takes him home.

Edward Scissorhands is played by the actor Johnny Depp who expertly plays the role as his very own story with absolute perfection. Edward Scissorhands, upon its release, received critical acclaim from critics as well as the viewers for its gothic theme and an amazing story that touched millions of hearts all around the world.

Since its release, the movie has garnered a huge following as it has achieved cult classic status. Even to this day Tim Burton has called Edwards Scissorhands as one of his greatest creations that will live on forever because of its intriguing cast and story.

This Edward Scissorhands tattoo design is the best tattoo that you can get inked your body if you are in the mood of showing your love to the people who would be there for you in your time of need.

This tattoo design pays the perfect tribute to Kim who had high hopes for the character of Edward Scissorhands, and who by the end of the movie even took matters into her own hands by taking the fall for Edward Scissorhands. Later on, we also learn that Kim was the one narrating the story of Edward to the child.

Everyone in life needs their own Kim and this art piece would make so much sense to get inked on your body if you wanted a quality tattoo that could help you in paying tribute to your close ones.

If you are in search of different than usual or perhaps unique Edward Scissorhands tattoo ideas then this work of art will fit the bill perfectly for you!

Not many designs may even come close to this amazing tattoo design as it fits the hand perfectly! The artist has done a top-quality job on the design with basic black ink work and the simple yet unique style of the art that uses just the face and the scissorhands to make much out of this tattoo design.

In case you are not completely sold on the idea, you can always ask your tattoo artist to add certain elements into the tattoo that you would like to add to the tattoo to make it much closer to the tattoo idea by making it different and turn it into that you will love showing off!

Not to forget, if you are a fan of Johnny Depp himself, then this idea can only get better for you because you can make this your very own Johnny Depp hand tattoo design to pay tribute to the actor.

Realistic tattoos are timeless and will forever be a part of the repertoire of a tattoo artist. This top-quality Edward Scissorhands tattoo design could be your very own attention grabber as you will find everything you need from this tattoo.

Tattoo ideas like this often work the best when you get them in watercolor and they will even be different from usual tattoos that people come across on the daily basis.

The artist here has done exceptional work with the basic sketching only to top it off with some of the best ink work that you can find out there in the world of tattoos.

If the tattoo doesn’t match your high standards then you may add your very own different ideas in order to bring the idea close to perfection.

Colourful tattoo ideas are hard to find at this time as people have a high fascination for the simple black tattoo as it can be managed easily compared to colourful tattoos.

This tattoo idea is one of the many Edward Scissorhands tattoo designs that get the most out of a design as soon as colour is filled into them!

The colourful background will always be the first thing to be noticed due to the time and effort that went into the creation of this tattoo and the sketch work comes close to perfection as it captures the individual scars on the face of Edward Scissorhands.

If you already have a tattoo on your body, then this tattoo may easily become the center of attention with its colorful artwork that people will love!

This striking tattoo idea may end up being the perfect stop for people who spend their time on the internet as go from one post to another post in their search for tattoo ideas that may come close to their definition of perfection.

Tattoos ideas like this are easily the first to come to mind when people think of aesthetically pleasing designs and if you like good artwork, then you will most definitely fall in love with the design at first sight.

This Edward Scissorhands tattoo idea takes a little from the entire plot of the story as it includes things that are associated with Edward. The scissors at the base of the tattoo, and the castle on top of Edward’s head come together to form the perfect frame for the tattoo.

When the movie Edward Scissorhands first came out, fans were quick to adore Edward’s emo personality and many may have even copied his attire and looks. If you were one of those people who were inspired by the character sketch then there is no way you won’t like this tattoo!

Tattoos like this use many different ideas to create a perfectly balanced tattoo idea that people will fall in love with at the first sight thanks to its creativity and astonishing artwork.

The scissor tattoo is one of the many parts of this amazing tattoo idea that will get people talking if they see it.

Arm-sleeve tattoos are one of the most sought-after designs because of the ease of access it comes with and tattoos like this can be a great addition to yo body especially the arm-sleeves as they are greatly suited for the location due to their medium to large sizes.

The tattoo is a simple enough idea that uses Edward’s face as the focal point and creates the entirety of the tattoo based on it. Inking tattoos like this idea on your body is a no-brainer actually since this movie will be remembered for years to come because of its popularity in the modern culture.

Edward Scissorhands has one of the most innocent-looking faces in the world of movies and this innocence is further proved during the runtime of the movie as it shows Edwards spending years and years alone in his castle as he stays alone and has no one to share his life with. Edward’s face is a symbolism of how he can hurt not only others but himself too unknowingly, as he touches his face and cuts himself on several occasions as the scars will tell you.

The sketch work and coloring by the artist are marvelous to look at and you can tell the amount of effort that has gone into this idea through the detailed facial features that perfectly capture the innocence of Edward Scissorhands as he spent years alone by himself.

Large-sized tattoos like this idea can be perfect for the legs or the thighs in case you are in search of a location.

The world of tattoos has been inspired by the art nouveau style and for years the style has been incorporated into various tattoos and concepts that provide a breath of fresh air to the basic tattoo designs.

This idea is another arm-sleeve tattoo that makes great use of the space provided by creating a half-sized body tattoo of Edward Scissorhands. The tattoo is beautiful to look at because of the amount of detailing that has gone into the sketch as it combines Edward’s lonesome self and adds a touch of the art nouveau by including stars and other small elements into the tattoo.

Even though the inkwork is amazing to look at, the unfilled frame behind Edward’s head takes the cakes as it creates a halo-like glow which can be interpreted as the innocence Edward had as he lived alone for years with himself without being tainted by the outside world.

As usual, we saved the best for the last! This stunning tattoo idea is based on all the elements from the movie that make Edward Scissorhands special in his own way.

The frame of the tattoo is astonishing to look at and makes great use of Edward’s portrait to take attention away from it. The frame also incorporates Edward’s castle and the scissors that are a part of his identity. The small lady-like portrait is that of Kim, who plays a large role in his development as she was there for him when he needed her the most. The snowflakes around the frame pay the perfect tribute to Edward’s ice-sculpting skill which he shows off to Kim when they get to know each other.

All in all, this tattoo idea is one of the greatest that has come out of the Edward Scissorhands movie.

Here are some other suggestions: