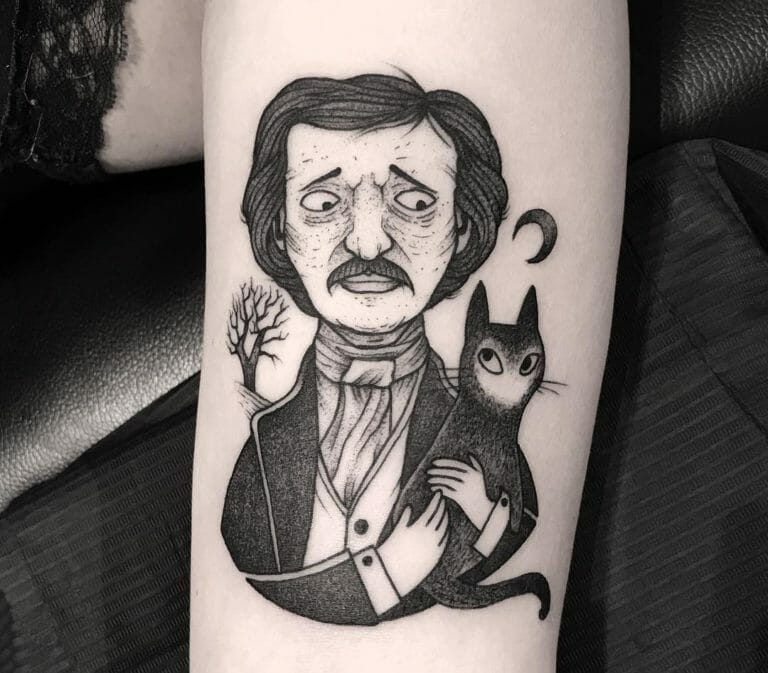 Are you looking for some cool Edgar Allan Poe tattoos? Then you’re in the right place because we’ve got some great ideas that will showcase your love of Poe!

Edgar Allan Poe is known as one of the most illustrated poets of the 19th century.

Poe serves as an inspiration for many people, not just for their writing but also in their daily life. As many know, Poe’s upbringing was rife with unparalleled grief and loss.

During the early stages of his infancy, Edgar Allan Poe lost both of his parents. At the tender age of 3 Poe found himself orphaned. Fortunately, a wealthy couple named John and Frances Allan adopted him and took care of him well into his teenage years. Throughout his lifetime Edgar Allan Poe was most famously known for being a prolific, yet harsh critic, who made many friends and enemies out of his peers. Aside from being a writer, Edgar Allan Poe also worked in publishing, the army, and even attempted to work with the United States Custom House. Safe to say, Edgar Allan Poe had many small stints across different working sectors before he landed on becoming a full-time writer. Many proclaim that he was perhaps the first writer to ever make his regular income solely through his writing services. He also served as an inspiration for many known writers who wrote books centred around science fiction and even detective fiction. He popularized the short story genre and his formulaic writing style is followed to this day. His most popular works include the poem ‘The Raven’, ‘Annabel Lee’, ‘The Cask of Amontillado, ‘The Tell-Tale Heart’, ‘To Helen’, and ‘The Masque of the Red Death’. Revered for the macabre and dark and gothic themes in his stories, Poe serves as an inspiration to many who wish to revel in a world situated between fantasy and reality, light and darkness, and life and death.

If your dream tattoo is an Edgar Allan Poe tattoo, then look no further! Although a full sleeve is a large commitment, it’s also a way to pay a tribute to someone or something that you love. Sleeve tattoos are often nothing short of extraordinary, and if you want something to pay homage to Edgar Allan Poe in a way that many people will be able to see for many years to come, then you should opt for a tattoo sleeve such as this one. This tattoo has got all the classic elements of a meaningful Edgar Allan Poe tattoo, such as a portrait image of the writer with a copy of his book, a skeleton, books, and the shadow of a tower in the back. Last but definitely not least, it’s a black and white tattoo, which is the colour of many popular Edgar Allan Poe tattoos.

Is there any symbol more closely associated with Edgar Allan Poe than the Raven? We don’t believe so! Getting a tattoo of a raven is a good way to hit two (or even three) birds with one stone! Not only do you get to pay homage to Edgar Allan Poe and his works, you also get a cool tattoo of a raven, and a gothic tattoo all in one! This dark tattoo of a raven transmits various messages, especially given its position and body language. Sitting atop a mountain many may percieve that it is looking forward into the sky, or even the future. The shading on the body and feathers add a certain texture to the tattoo and also give it dimensions. This is a good tattoo for those who don’t want an extremely obvious Edgar Allan Poe tattoo, but still want a cool tattoo that holds a bit of symbolism behind it.

Those who have read ‘The Raven’ recently, must be aware of the popularity of this phrase and its meaning. A nevermore tattoo is a good option for Poe fans, as it is a reference to one of his most special works, and can also be a good way to identify other passionate Edgar Allan Poe fans. This dark and gothic tattoo has all the elements that any Poe’s fan would need. It has a dark portrait of the writer, with hollowed white eyes and a mummified face, and a raven and house sitting on top of it. To top it all off, the writer has the word, ‘Nevermore’, inscribed on top of his forehead. Those that were looking for ‘Edgar Allan Poe the Raven tattoo’ or even simple raven tattoos should stop looking because we have it all!

Poetry aficionados and Poe fans who do not have a Poe tattoo yet should consider getting a tattoo like this next one! As many must be aware, Edgar Allan Poe didn’t just become a famous writer due to his articles, poems, and short stories. He also gained a lot of notoriety for his works that transcended the science fiction and detective fiction genres. Even known writers such as Arthur Conan Doyle have professed to taking inspiration from his work and being influenced by his famous words. This is a great portrait of Poe to get tattooed, since it combines various tones, colours, and styles in order to give a detailed picture of Poe. The red in Poe’s background and shirt perfectly offset the dark hues in the picture that are reflected by his outline and the outline of the cat as well as the frame. The frame as well as Poe’s face has different types of shadings, which make the portrait look almost lifelike. This tattoo works great as a statement tattoo.

Gothic tattoos have been all the rage for the last couple of years, and Edgar Allan Poe just may be one of the most classic go to options in terms of tattoo designs for those who wish to get a gothic tattoo. Poe’s works and his lifestory have been commonly associated with some similar dark themes such as the macabre, life and death, and most popularly dark romanticism. Many know him to be one of the main proponents of Romanticism in American literature. Several facets of this tattoo portray gothic imagery, such as a skull in the shape of Poe’s head, the skulls that cover the entirety of his chest, and the Raven with a gaping mouth in top of Edgar Allan Poe’s head. Depending on the culture, a raven can often symblize many different things, ranging from death and a bad omen to prophecy, insight, and transformation.

Famous quotes are a great tattoo option for those who wish to immortalize their favourite writer’s words on their body. Quotes such as this one in a medieval font make for great shoulder tattoos and arm tattoos. Other body parts like the back, the chest, and the ribcage are also common choices for many people. This famous quote is from ‘The Raven’, one of Poe’s most famous works. The best thing about famous Edgar Allan Poe tattoos that are quotes is the fact that you may customize the words according to your likes and interests. For example, if you wish to have a minimalist tattoo, you can take a short phrase and have it tattooed on the inside of your wrist in a very small cursive font. With words, all the power lies in your hands. This particular quote is great for those who have been looking for their first or even their next ‘Edgar Allan Poe Raven tattoo’.

Traditional tattoos have a charm of their own that many new styles and new tattoo designs just cannot come close to. This is because many of the techniques and strokes used in traditional designs, including the use of specific colours, make every tattoo stand out in a way that is unique. Take this tattoo, if you take a close look, you can see that multiple complementary shades such as red, black, brown, grey, and yellow have been used to highlight different aspects of the tattoo. There is even shading that has been done on the face and other parts of the tattoo that add another dimension to it and make it look more realistic.

Small Edgar Allan Poe tattoos are perfect for those who wish to have a tattoo that isn’t too eye catchy and still makes for a great homage to their favourite writer. This tattoo is a great example of a tattoo that can be detailed, yet small, as its one of those Edgar Allan Poe tattoos that one instantly recognizes and also makes for a fine piece of body art due to its expert craftsmanship. Several features of this tattoo, such as the deeply set eyes, chiselled cheek and jawbones, and the expert shading on the hair easily make it a great tattoo option. Other options for small or minimalist tattoos also include a small raven, a small engraving of a famous quote, a gothic or dark portrait tattoo of the writer, or even the title of one of his works. The best part about small tattoos is the fact that they are relatively easy to conceal.

On the lookout for a surrealist tattoo? Then we’ve got you covered! One of the coolest aspects about tattooing, or even art in general, is the fact that one can engage in various different styles and there is no limit to the creativity or ingenuity that once can utilize. This tatoo is just one example of the different techniques that one can use to elevate a simple tattoo into an extraordinary piece of art. The tattoo showcases the face of the writer being split, almost as if to signify that whatever is coming out is a product of his mind. Out of the top of his head, a raven emerges and looks up at the sky, which is a reference to his poem ‘The Raven’. The Raven is also a famous symbol for transformation, prophecy, and even sometimes even loss. The light emanation from the Raven is another special aspect, which signifies the loudness of the Raven’s call. Last but not least, dark shading and dark tones have been used throughout the tattoo, an ode to the sombre aspect of some of Poe’s works.

Another famous Edgar Allan Poe tattoo style is of the Raven and skulls. This is due to the fact that over time, most people know Poe mainly through his famous poem, ‘The Raven’. In many cultures ravens as assumed to be the intermediaries between the spirit world and the human world. Therefore, if you look close enough you’re going to notice the fact that most Edgar Allan Poe tattoos with ravens often have dark elements, such as this one.

This is a black and white tattoo with gray shadings, which depicts a raven sitting on top of a skull, a common representation of death or mortality. It looks like it is safeguarding the skull, almost as if it is a guardian of the dead. In many cultures, you may see the link between ravens and the dead. In the mouth of the raven is a feather, and anyone who looks closely can also see the inkpot and the book on the bottom of the tattoo. Therefore, this raven and skull tattoo is also an homage to the poem, ‘The Raven’. Many people associate the raven tattoo meaning with light elements like prophecy, protection, and transformation, or even dark elements like death, or even loss.

If you read the words of Edgar Allan Poe during your adolesence, then you must be aware of the impact his words can have. Known to be one of the first writers who made his income solely off writing, Poe served and continues to be a huge influence to many all across the world. We hope you like these tattoo ideas!