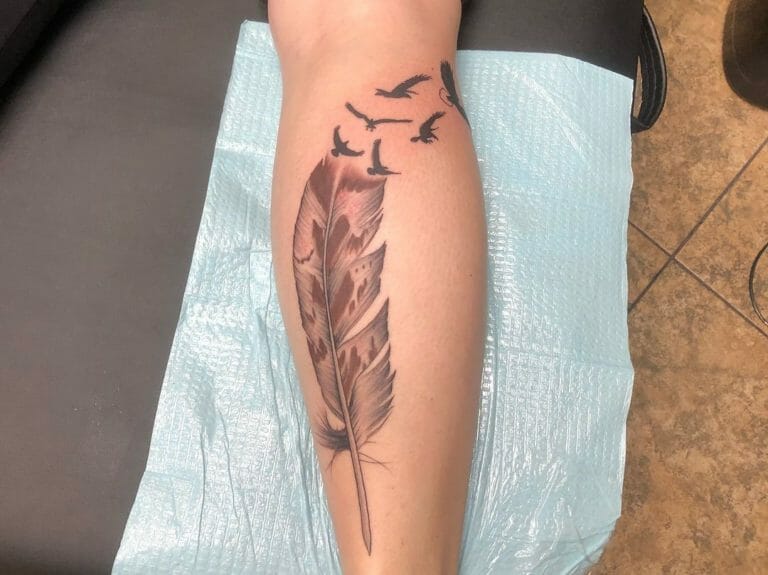 Are you looking for a unique tattoo idea that would blow anyone’s mind? Our collection of the finest eagle feather tattoo is sure to bring gazes of everyone!

Eagle feather tattoo is one of the most unique tattoo ideas that has taken the globe by storm.

Of late many people have been seen to get inked by this tattoo design. It represents someone who is brave, honourable and courageous.

An eagle feather too has a wide number of symbolic identifications like friendship, love, mystical powers and other uniqueness. Keep reading to know more about tattoo designs that represent spiritual energy, communication, environment, a sign of hope among people and warriors that have been passed from generations from different cultures of the world.

The picture above is of a native American tattoo with a smoking pipe and two bald eagle feathers hanging from the pipe like ornaments, and a tent in nature below. This could be a wonderful choice for an eagle feather tattoo.

Many people choose to get eagle feather tattoos as memorial tattoos. There are many reasons behind it. Eagles are thought to be sacred and messengers of God, so they carry our prayers to the Almighty. In addition, when you give someone eagle feathers, you are acknowledging them with respect, love, and gratitude. Hence, a feather tattoo design can serve as a perfect memorial tattoo.

The picture above shows a black and grey tattoo of an eagle feather with two words beside them, that read ‘Granny’ and ‘Kokum’. The word ‘kokum’ means grandmother to indigenous people. It seems that the wearer honoured both their grandmothers with this tattoo.

Most tattoos that have a native American root are done in black and grey shades. In addition, most people choose to get eagle feather tattoos in good old black and grey colours anyway. However, you can give it a little modern touch by introducing watercolour into the design. Watercolour tattoos can usually be extremely gorgeous due to their technique of no borders and colours fading into each other.

The picture above is a tattoo of two eagle feathers and blue and red colours have been added as watercolour elements and they serve as enough proof of how beautiful these tattoos can be. Feather tattoo designs and ideas like these can be inked on the body and thus can represent the symbol of spiritual energy. Tattoo ideas like these are unisex designs and thus can be inked on the body by both men and women.

The picture shows a beautiful and classic dreamcatcher tattoo with three eagle feathers hanging from the dreamcatcher. You can add a little colour to the design if you want and that would perfectly represent an eagle feather tattoo design that is related to many beliefs, cultures, dreams, spiritual energy, freedom, bravery, inspiration, the meaning of truth and other associated acts that makes this art a strong point of connection with the inner self of the person wearing the tattoo.

Dreamcatcher tattoos can be done for their symbolism and also for their ornamental values. In this way, many people use eagle feathers for many other ornamental tattoos as well. This does not mean that the tattoos lose their meanings or the fathers don’t hold their symbolic idea or their significance anymore. It rather increases the beauty of your tattoo. Although most women choose to get these tattoos, they can look cool on men as well.

The tattoos we choose hold many meanings. We want to express only one or two meanings through them, but sometimes they get lost in the midst of the many. Including a message in the design can work wonders in these cases. When you’re getting an eagle feather tattoo, you can write an inspirational message of strength, power, and courage, or a message for the loved one who is in the afterlife.

The picture above shows a simple, fine line tattoo of an eagle feather, with a message for a loved one and two dates below, probably the birth date and the date of their death. It is surely a beautiful memorial tattoo.

An eagle eye tattoo and an eagle feather tattoo holds a similar meaning, which is focus and determination. That’s why their combination tattoo designs look good too. Eagles are known for their keen vision. They can spot small prey from miles away. They can stay focused on their prey and they don’t miss. That’s why eagle eye tattoos can be excellent tattoos for people who admire these qualities.

The picture above is of a tattoo of an eagle feather combined with an eagle eye on its head. A few birds can be seen flying from the top of the feather.

The picture above shows a tattoo of two eagle feathers with a beautiful monarch butterfly. You can add whichever butterfly you want for your next tattoo design. You can also introduce a little watercolour in the mix to make it look cooler and more trendy.

One of the popular designs of eagle feather tattoos that people get is by including a skull into the design. It might mean many things, like staying strong even after the death of a closed one, overcoming situations where you were close to death, accepting and overcoming the fear of death with courage. Now, the sugar skull tattoo has its roots in Mexican culture. It can symbolize your love for a dead person.

The picture above is a tattoo of two sugar skulls, two red roses and an eagle feather. Sugar skull tattoos can be fun to design as you get the freedom to decorate it however and in whichever colour you want.

The picture above shows a buffalo skull tattoo with a head of an eagle above and four eagle feathers hanging from the horns. The colourful design made up of geometric patterns that have been introduced in the tattoo is making it look quite vibrant.

Apart from the above feather tattoo designs, you can also opt to get inked on the body or other parts like the arms, neck or shoulders on other different ideas like a wolf with eagle tattoo designs, an abstract tattoo of a feather would bring out all the uniqueness of the world along with a different approach in the freedom which is the flight of a bird.

Still looking for inspiration, then checkout this feather tattoo ideas.