101 Best Dragon Yakuza Tattoo Ideas That Will Blow Your Mind! 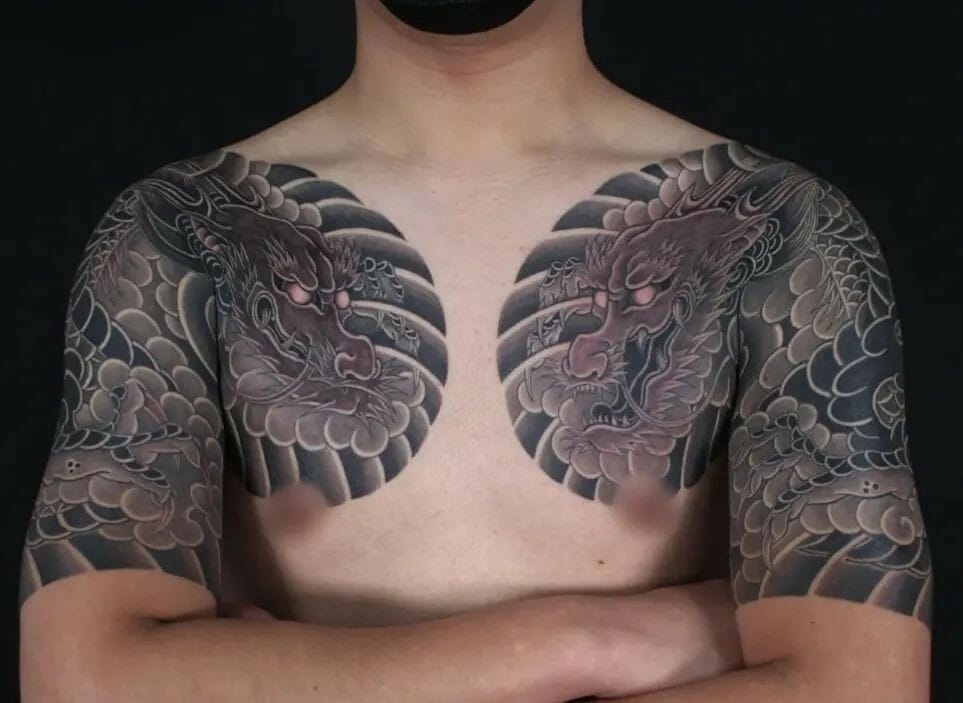 If you are a person who loves dragon tattoos and is planning to get a dragon Yakuza tattoo done on your body, then have a look at these designs.

The term ‘Yakuza’ is a Japanese word that means ‘Mafia’ or in other words ‘Violence Groups’.

By hearing the word ‘Mafia’ or ‘Violence’ the first thought that we can relate to it in the very first place is terror, fear, or bad luck. This is exactly the opposite of the meaning of a Dragon tattoo which symbolizes fearlessness and strength and that is the exact reason why the combination of Dragon tattoos and a Yakuza tattoo goes best with a person with a strong and bold personality.

These i.e. the form of Yakuza tattoos was adopted from a Japanese form of tattooing usually identified by the name of ‘Irezumi’. Back to the time when these form of early yakuza tattoos came to light, it was used by them i.e. the people of the violence or mafia groups to mark or in one word identify themselves as a member of the group.

Some form of Dragon tattoos even has certain spiritual resemblances attached to them like that of a Tiger fighting a Dragon which signifies a war between God and Evil power. So this form of tattooing can be used by persons of varying mindsets to symbolize or bring out the different sides of their character be it bold or be it spiritual.

As mentioned earlier, tattoos have certain spiritual resemblances too. This is exactly as said i.e. a tattoo of a Dragon fighting a Tiger which signifies a war between Good and Evil. A Black and white tattoo is always a good option as the color black for tattoos can be prominently noticed on any part of the skin. This black and white Dragon Yakuza tattoo across the leg is an ideal example of the tattoo artists who put their entire attention to it to the utmost perfection. So if you are a person who keeps a strong belief in both good fortune and bad omen, then this leg tattoo is something which you must go for.

If you are a fearless and passionate woman looking for a good Red Dragon Yakuza tattoo design to get inked, then this tattoo is just meant for you. Moreover, in Japan, a red tattoo is considered to be extremely fierce. The Red Dragon tattoo in most cases comprises tribal designs. So, if you are someone who has a fondness for a fusion of traditional Japanese Dragon Tattoo with a bit of tribal mixture to it then this is something you must go for to add that additional stars to your look and bring out that Feminine grace.

Japanese form of tattooing also includes many other patterns or forms notable amongst which are the Japanese skull tattoo and the Japanese snake tattoo. Also, it included tattoos of Koi Fish representing strength the most popular amongst which was Red koi fish.

Black Dragons denote wisdom in itself. Yakuza tattooing means tattooing throughout a body part or across the whole body. Upon doing some research work, it has been found that the culture of tattoos has been strictly prohibited in Japanese culture due to its resemblance with the well-known Yakuza Culture of Japanese Yakuza groups, who used to mark themselves as a Yakuza member by tattooing their full body. So it can be concluded that Japanese tattoos were in the tattoo world ever since the ancient Japanese tradition of tattoos came into existence.

Black Japanese Yakuza Dragon Tattoos were found to be quiet in trend and one of the most common Yakuza tattoo forms when traced back to the time of Yakuza Culture of Japan, and is noticed to be coming back to trend in the past few years. If you too are a dragon tattoo lover and want to make yourself an active part of this flowing trend, then you must try out this type of Yakuza tattoo design once. This back Dragon Yakuza is also an example of the patience and perfection level of the tattoo artists all over who have dedicated most of their time to bring out perfection to this beautiful piece of tattoo art.

Yakuza Tattoo Design For Hand And Half Chest For Men

Dragon Yakuza tattoos imprinted on one’s body also symbolize a protective power and are believed to protect the wearer against any or rather all sorts of negative powers. It is also considered a good fate due to which dragons are also seen to be imprinted on the National Flags of many countries.

Want to get inked with a Dragon Yakuza Tattoo design on your chest covering just half of it? Well, then this Yakuza tattoo design is completely your cup of tea. It will cover just half of your chest and one of your hands completely, making it look absolutely stunning. You can also try out this exact same tattoo design in a combination of black and white color which will give it an equally gorgeous outcome. Moreover, the color white itself is considered to be noble in itself.

In Japanese Tattoo Culture, Snake tattoos usually mean protection against all sorts of physical illness and even bad luck. Apart from this, some of the beliefs of the traditional Japanese people or even according to the Japanese mythology is believed an encounter with a white snake is considered to be a good fortune or good luck, whereas, that with a black snake is considered to be bad fortune or bad luck. Hence if you too consider yourself to be that bold then make definitely make this tattoo stay on your arm.’

Dragons or Dragon tattoo are a symbol, in general, are a symbol of wisdom, power, strength, and bravery and is even used in Zodiac signs which symbolizes typically strong personality in some persons.

If you are someone who wants to give it a try to the Dragon tattoos but is not sure about how it will look on your full arm, then this Dagon Yakuza tattoo design is there to help you solve your problem!

If you are a person who has no intention to cover most of your body part with tattoos, yet want to have the feel of ancient Japanese tradition by tattooing yourself with a traditional Japanese Dragon Yakuza tattoo, then you must give a try to this shoulder to chest tattoo design which will cover half of your shoulder and half of your chest in a single design itself.

Different colors of Dragons symbolize different meanings like the Blue dragon which symbolizes gentle and loving nature as well as the Yellow dragon whose symbolic meaning is royal.

Apart from the red, black, or gold dragons, among which the gold dragons are symbolic of giving value to virtues; there are many more colors to experiment with. If you are a human who loves to play around and experiment with colors, then such compositions of red and green dragons along with a touch of black and blue are all that you need to give you that beautiful colorful tattoo.

Also, the concept of having a skull tattoo on any part of the body symbolizes the concept of one’s death or even mortality. Here are a few more Japanese Yakuza tattoos for you.

What is a dragon yakuza tattoo?

A dragon yakuza tattoo is a large and elaborate tattoo featuring a dragon motif. This type of tattoo is typically associated with the Japanese mafia, or yakuza. Dragon yakuza tattoos often cover the entire back, chest, or stomach, and can be extremely detailed and colorful. They are usually considered to be very masculine tattoos, and are often associated with strength, power, and ferocity.

What does a dragon yakuza tattoo represent?

What are some other popular yakuza tattoos?

Other popular yakuza tattoos include tigers, snakes, and skulls. These tattoos often have similar meanings to dragon yakuza tattoos, such as strength, power, and ferocity. Yakuza tattoos are typically large and elaborate, and often cover the entire back, chest, or stomach.