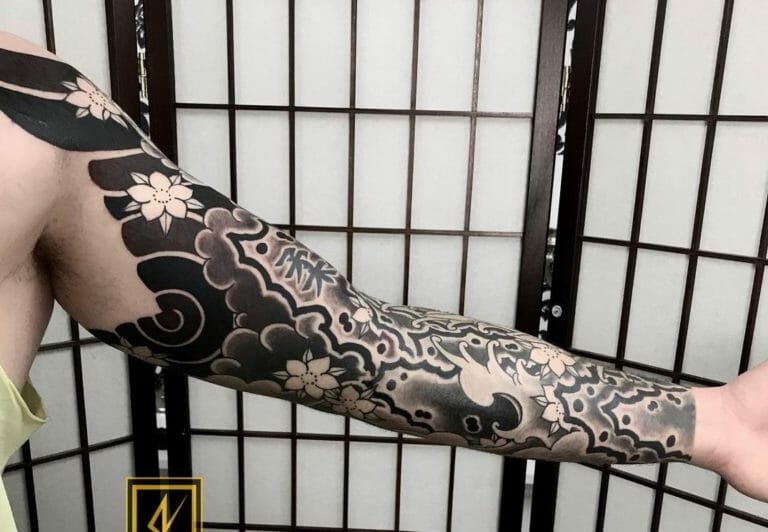 A dragon is a large, serpentine-like legendary creature that has been part of the folklore of many civilizations.

As a result of their mythological importance, there has been an increase in the creation of the dragon tattoo. Japanese dragon tattoos are an especially well-known idea because the dragon in Japanese folklore represents freedom and good luck.

Dragons have been an important part of the many Asian folklore and have more or less the same interpretations in all Asian cultures including Japanese, Chinese, Korean and other parts of Asia. In western cultures, dragons are seen as a symbol of manliness, because of which there are a plethora of half sleeve dragons tattoo designs for men. Dragons tattoo can be paired up with other animals like the tiger, serpent, or snake as all of these animals have been part of the dragon folklore one way or the other.

Hopefully, you can reach a decision after going through this list of great dragon tattoos for the arm sleeves.

The dragon tattoo is one of the most iconic styles and is a popular tattoo for men in both Asian culture and western culture.

This awesome-looking tattoo design of the majestic creatures known as dragons is among the best sleeve tattoo ideas that are full of little details paying tribute to the mythical world of dragons.

Detailed dragon sleeve tattoo ideas like this are the perfect example of how artists pour their hearts and souls into their art in an effort to bring out the best of the art style as they incorporate small details into the design. The red and grey tone of the tattoo along with the fierce Japanese dragon portrait helps this tattoo design ooze with power.

A cool-looking tattoo idea like this is best suited for the arm sleeve but can also be extended to the chest and the back, or can be inked on your leg.

If you are someone who doesn’t fancy colourful ink work on a tattoo and are going for a different approach in the form of a black and grey tattoo design, then this tattoo design might be the best according to your preferences.

The detailed all-black design complements the mythical creature and the addition of traditional and tribal patterns in the body of the tattoo brings out the best of this art style. Black and grey tattoos like this are popular among different groups of people who like ideas like this that bring out the spirit of the design.

If you are planning to get this dragon sleeve tattooed on your body, do remember that thanks to the flexibility of tattoos, you can add any number of elements, for example, a skull or flowers to step away from the usually popular style and change it to something that you take inspiration from.

Just like the Japanese dragon, the Chinese dragon too can serve as an amazing inspiration for different styles of tattoo for men.

This tattoo is one of the best dragon tattoos that is available in the tattoo world and if you want to pay tribute to your Asian culture or just want cool tattoo ideas to select from, then this art will be the perfect addition to your body.

The all-black design with an intricately drawn dragon portrait is amazing to look at and works perfectly as a half sleeve or a full sleeve tattoo.

If you are in search of Chinese tattoo designs for men and women, then this is one of the best dragon tattoos to end your search. Not to forget, you can add any number of details to the design like tribal patterns, or make the dragon fire breathing, or small ink fills to make it look colorful. And if you want to change it up a bit, you can always get this inked on your chest, or back instead of the usual arm sleeves location.

What is better than one dragon tattoo? The obvious answer is two dragon tattoos! That is exactly what you get with this awesome idea.

This amazing full sleeve tattoo idea takes its inspiration from the Yin-Yang symbolism as two competing dragons are opposite to each other in nature as they face each other in a duel symbolising the two-way creative nature of Yin and Yang.

The inclusion of flowers and petals are some of the small addition in the black and reddish ink tone of the tattoo that takes inspiration from both traditional and tribal aspects of the Asian culture.

A cool tattoo like this is a lot of work so let your artist do his job and you can maybe chime in with a few details that you would like to add in the form of a skull, snake, or a tiger that is also used as a part of the traditional Yin-Yang tattoo ideas.

There are few dragon tattoos that do justice to the majestic nature of these fire-breathing creatures and this marvellous tattoo is among some of the best dragon tattoos to do so.

This Japanese dragon tattoo is an absolutely scintillating artwork that oozes with power and wisdom thanks to its awesome sketch on a whole. The usage of red, black, and yellow ink provides this tattoo with its cool fiery, and electrifying concept as it includes small details like the presence of a skull that is helpful in portraying the ferocity of the fire-breathing creature. The tribal pattern on the tattoo adds a cool look to the body of the portrait and gives it a close interpretation of the dragon’s nature according to the Asian culture.

An astonishing Japanese dragon tattoo like this is best for the arm sleeves, leg, back, or chest.

The Pagoda is a multi-tier tower that is seen as a symbol of wisdom and power as it used to house holy relics in ancient times.

This stunning black and red dragon tattoo combines the mysterious nature of dragons and the importance of the pagoda and combines them into a cool tattoo concept. The addition of clouds in the tattoo pays the perfect tribute to the tales of dragons soaring through the skies as they are known to do in folk tales based on them.

The artist has done a great job in this tattoo as they create a dragon in the clouds and end the tattoo at the chest with the dragon reaching out for the pagoda in search of power and wisdom.

An artwork like this that symbolises the dragons in such essence is best for people who know their mythology and want a cool symbol of it on themselves. Arm sleeve tattoo designs like this can also look good as a half sleeve tattoo or as a medium-sized tattoo on many parts of the body like the leg, chest, or back.

Blue is known as the colour that symbolizes tranquillity, freedom, and imagination, and what is a better way for the people who think of themselves as calm and collected than to get a blue dragon tattoo on your body that complements your ideas of life.

This tattoo belongs to the category of tattoo designs for men who are amused with the concept of wearing their hearts on their sleeves, literally!

Dragon tattoo ideas like this make the perfect use of dragons by portraying them as fierce creatures plentiful of mystery. These dragon tattoo designs for men can be great additions to already existing tattoos of other animals like the snake or the tiger that will complement the dragons.

Dragon sleeve tattoo designs have seen a plethora of ideas being incorporated into them over the years as artists try to keep their designs fresh.

This is one of the many new ideas that see the usage of a steampunk-themed concept and adds its own portrayal of the fierce Japanese dragon. The end result as we can see is a wondrous piece of work created by the artist that captures the essence of the awesomeness of dragons.

If you are not completely sold on the idea, then you can add your very own little details and ideas into the concept before you get this tattooed on your body.

Much like the Japanese and Chinese dragon tattoo concept, the Korean dragon tattoo idea represents good fortune and spiritual clarity. In addition to that, in Korean culture, dragons as seen as the protector of Buddha and temples.

This is a great tattoo for men and women who belong to Korean society and want to pay tribute to their heritage. It can also be a great sleeve tattoo for people who in general just want a cool-looking tattoo on their arm sleeves.

You can also add as many of your ideas into the tattoo or turn it into a half-sleeve idea if you aren’t willing to get it tattooed on your entire arm sleeves.

This Chinese dragon tattoo is one of the many sleeve tattoo ideas that come close to perfection just because of how intricately accurate and amazingly drawn they are.

The landscape portrait of the snake-like dragon figure rising from the waves pays tribute to the Chinese dragon as it makes its way to the sky passing through the rigid mountainous landscape.

A stunning sleeve tattoo like this is a great idea that can be tattooed on other parts of the body like chest, back, or leg, or you can keep it as a sleeve tattoo by letting it be full-sized or turn it into a half sleeve tattoo. Whatever the end result, tattoo designs like this will end up looking as an absolutely stunning piece of work.

Here are a few suggestions for dragon tattoos: