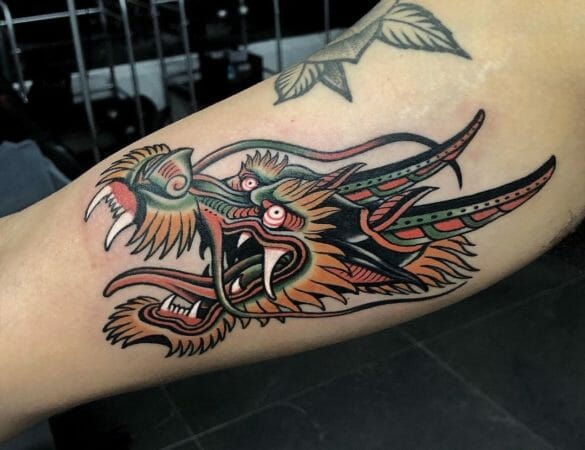 If you are into ancient myths and legends of different cultures worldwide, then this list of dragon head tattoos are definitely for you.

Dragon tattoos have dominated the tattoo scene for decades now with their powerful symbolism and rich cultural heritage.

So, what does a dragon tattoo symbolise? Well, due to their roots in different cultures all over the world, the symbolism behind a dragon tattoo design can vary from one to another. However, some of the symbols are universal and the most common symbolism behind the dragon tattoo is wisdom, grace, good luck, strength, masculinity, intelligence, and prosperity. We will be examining the different significances of the dragon head tattoo in accordance with various cultures worldwide in this article. As the dragon is more of a sacred creature in the Asian and Oriental traditions, the Chinese dragon head tattoo and that of the Japanese should be done respecting certain traditional beliefs. The Western depiction is more of a casual and simple style and an obvious choice for pop culture buffs as these mythical creatures make their appearance in cult books and movies. Whatever art style you choose, the Chinese dragon head tattoo or the Western, the dragon tattoo design will be a spectacular choice. So, if you are looking to get a dragon head tattoo inked, then this specially curated list of dragon tattoos is specifically what you have been searching for till now.

The dragon forms an important part of the Japanese culture with the mythical creature acting as a symbol of protection for the families and households. It was believed that the first of the Japanese emperors was the direct descendent of the dragon and hence worshipped in many parts of the country. While some legends depict the Japanese dragon as an aquatic creature, others narrate how it is more of a creature that aviates the heavens. Hence, the Japanese dragon tattoo is depicted with either water elements or as a flying creature. A common Japanese traditional belief is that keeping a dragon symbol in the home will bring longevity and happiness to the family and the dragon will also act as a guardian, warding off evil forces. If you are Japanese or wish to pay homage to Japanese culture, then this Japanese dragon tattoo is for you. Place this body art on the arm to be spotted easily.

One of the most unique tattoo ideas of all the dragon head tattoos on the list, this tattoo depicts a fight between two dragons, one drawn in black ink and the other red. The red dragon head can be seen as a representation of the modern dragon tattoo, while the dragon drawn in black ink is the old school one. The conflict between the two can be depicted as the clash between old traditions and new, of the past and the present. The red dragon represents masculinity and strength, while the traditional black dragon represents power and wisdom. Place this simple dragon tattoo of your choice on your neck for your friends to see.

Dragons are fascinating creatures ladened with deep symbolism and rich cultural history across various ancient cultures and new all over the world. The dragon tattoo design has been in vogue for the past decades and will continue to be so. However, dragon tattoos have numerous variations such as the Chinese dragon, the Japanese dragon, the dragon as imagined in the West, as well as tribal and Celtic and Aztec variations. As one of the most sacred mythological figures in both the eastern and western civilisations, these creatures are revered and sacred. This is why extensive research is required before getting dragon tattoos. The Chinese dragon tattoo and the Japanese dragon tattoo are sacred designs and demand to be respected, while the Western version of the dragon tattoos is a vicious and mighty creature breathing fire. This particular design has been done in traditional black ink and depicts an angry dragon head in full glory. Make sure the dragon head design is placed correctly, preferably on your back or chest, to be executed perfectly.

The dragon is considered to be one of the most sacred creatures in Chinese tradition. They are worshipped for guidance and protection in life and are also thought to usher in good luck. When China was under imperial rule, the dragon was the symbol of the Chinese premier and only he was permitted to use the dragon as his representation. This tradition continued till the modern days with the dragon being featured in the flags of the Qing Dynasty even from 1862 to 1912. The Chinese conceptualised their idea of a dragon as more of a serpent-like creature with four legs which is reflected in the Chinese dragon tattoo, unlike its Western counterpart which depicts the traditional winged creature form. Get this Chinese dragon tattoo as it is laden with symbolism of fortune, wisdom, security, and strength. But it is important to keep in mind that the Chinese dragon should be depicted flying upwards as the Chinese believe that a dragon flying downwards is a bad omen.

This unique tribal themed dragon head arm tattoo adds a fascinating twist to the popular dragon tattoo design available. While the dragon head is depicted in a simple manner, what complements the minimalist design is the full-fledged tribal design drawn outside with its extraordinary detailing and intrinsic designing. This tribal dragon arm tattoo is a captivating piece of art with all its minute and enthralling designs making the whole tattoo look spectacular upon finished. You can also place this tattoo on your chest if you want.

Much like their Japanese counterparts, the Celts also consider the dragon to be their guardian as well as the protector of the deepest secrets of the universe. They are not considered demonic or evil creatures much like how the western dragons are portrayed as. If you are into period dramas, then you must have spotted flags with dragons drawn on them. Traditional Celtic culture also has dragons drawn on their armours and flags for centuries as a mark of respect and to wish protection from enemies. The dragon is considered one of the most powerful symbols in Celtic traditions. The dragons are usually drawn with the body formed by many intertwined knots that represents the various ups and downs in life. The Celtic dragon has also its tail in its mouth to symbolise the cyclical nature of life. The Celtic dragon tattoo makes for an impressive dragon tattoo idea with all their complex and intricate knots and curls and demand quite a bit of skin space to be executed flawlessly. Hence, the best position for a Celtic dragon head tattoo is the chest or the back.

The Western idea of the dragon bears a stark contrast when compared to that of the Oriental and Asian counterparts. The Western dragon is a fiery and violent beast, breathing fire and ominous looking, unlike the Japanese or the Chinese dragon. Popular Western fiction as well as ancient legends and mythologies view the dragon as an obstacle in the path of the protagonist. In Nordic and Greek mythologies, fighting a dragon was seen as a brave feat and a true sign of masculinity. Therefore, many ancient tales narrate how some brave knight was courageous enough to take on a dragon and win. Recent popular culture has made the dragon more famous and mainstream with the mythical creature making its appearance in cult books such as ‘Harry Potter’ or the ‘Lord of the Rings’.

Some tattoo enthusiasts are tired of the old school black and white ink colours and want something more vibrant and adventurous. This red dragon head tattoo is perfect for such tattoo connoisseurs for its vibrant and rich hues. A red dragon tattoo represents masculinity, vitality, and power. These dragon tattoos also portray good fortune and hence are a very common motif seen in weddings that symbolise cheerfulness and good luck.

Most of the dragon tattoo designs mentioned in this list require a lot of commitment and time as well as a costly (and painful) experience. Thus, those getting inked for the first time or are on a tight budget might find it difficult to go with these dragon tattoo ideas. But fret not, we have you covered if you fall in either of the above categories with this minimalist dragon head tattoo that demands none of the above but looks cool nevertheless. Place these simple and minimalist dragon tattoo designs on the arm or wrist where they could be spotted easily.

Some of the experienced tattoo enthusiasts opt for a full sleeve tattoo design as it complements their personality and love for tattoos. A dragon tattoo is all about power and strength and a full sleeve dragon tattoo is the best option to show off your toned muscles after all the hours spent in the gym. However, opt for this dragon head sleeve tattoo only if you are comfortable and are also willing to commit.

Dragon tattoos are one of the most common tattoo designs in the tattoo community and the raging popularity shows that these are here to stay. Choose your own style of dragon tattoos from the list above or consult with professional tattoo artists accordingly for the best tattoo design according to your choice of fashion and personality. Keep in mind while the West depicts the dragon as fiery creatures, the Japanese and Chinese worship them as traditional guardians and protectors. Therefore, extensive research is required on your part to have the best dragon body art which represents your root and faith. Get the dragon head tattoo you like according to your cultural heritage and beliefs from the wide assortment of dragon tattoo ideas available. Always go for a professional and experienced tattoo artist for the best experience and to save yourself from future complexities. Happy inking!