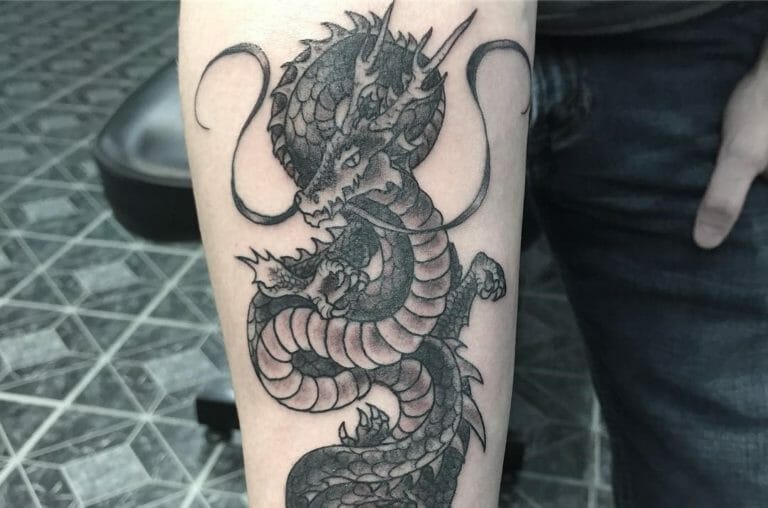 In search of some awesome designs to ink your forearm? Well, we have curated a cool list of dragon tattoos for you to show off your style!

A dragon tattoo generally symbolizes the spirit of the wearer with its unique and diverse designs.

A mythical dragon is a popular object manifesting strength, wisdom, courage, and prosperity from ancient times. While a dragon tattoo looks good on both men and women and can be placed anywhere on your body, the forearm provides the most exposure and highlights its significance.

Over time, dragon tattoos have almost become an emblem of the virtuous spirits known to mankind. The fierce dragon is interpreted in different ways among different cultures and so the tattoos have some regional implications. While guys find this motif utterly fascinating, girls also have taken active participation in getting a dragon tattoo inked on their bodies. Now the kind of dragon that you wish to draw on your skin is also important. You must know that different dragons represent strikingly different things. For instance, if you have a fascination with Asian cultures, a Chinese dragon, a Japanese dragon, or a Vietnamese or a Korean dragon tattoo might be your cup of tea. On the other hand, if you are someone who tends to shift away from the traditional, contemporary western dragon tattoos might interest you. Which is to say, there are myriads of dragon tattoo designs waiting to vibe with you. A dragon tattoo on the forearm could cost you a minimum of $600 but it is a highly volatile figure depending upon the kind of design you choose. The popularity of dragon tattoos proves that they can never be a bad choice. Whatever the design may be, a dragon tattoo will add to the beauty of your skin, appreciating your love for body art. Keep reading to find some of the best dragon tattoo ideas that will make you book an appointment ASAP!

Guys who love traditional dragon tattoos can draw inspiration from this design. Here, the artist has portrayed a full-length dragon in black ink and using shading techniques. The dragon head consists of minute detailing which in turn increases the appeal of this Chinese dragon tattoo. The tattoo could also be portrayed in colour to better exhibit what the dragons symbolize in Asian cultures. Also, if you do not like your tattoos covering the entirety of your forearm, you may ask for a cool, vertical dragon design.

One of the main characteristics of Japanese dragon tattoos is that they are often exhibited as ferocious, malevolent beasts. But to balance out the wrath of this Japanese dragon, the artist uses red flowers that act as embellishments and produce a contrastive look. Intricate shading and the size of this dragon make it the right fit to place the tattoo on your forearm for the exposure that it deserves!

Compressed into a slender boundary, this blue dragon tattoo takes the cake! This tattoo design runs down from the funny bone to the wrist, creating sort of a horizontal canvas for the Chinese dragon. As could be interpreted from the blue colour of the dragon, this piece of art puts forth the Chinese water dragon to be emerging from the seas to reach the sun. The ascending blue dragon attempts to represent positivity as is believed in Chinese culture, and symbolize the pacifying power associated with these creatures. This dragon tattoo design is colourful, vividly detailed, and an awesome choice for guys who wish to ink the back of their arms.

This sleeve tattoo has a lot more in store than just the figure of a dragon. Paired with an eagle and a Hannya mask, this cool dragon tattoo design is bold and dark, complementing your masculinity. The fire breathing creature adds to the already threatening image a tinge of strength power and wisdom. This dragon arm tattoo is an awesome choice for guys who want to level up their sleeve tattoo game.

Tribal dragon tattoos have been popular since ancient times and have often been a mark of courage, power, and honour for those who had the opportunity to get inked by their peers. Thus it is an art form that lived its way through cultures to the present day. Guys often prefer a tribal dragon tattoo owing to its simpler portrayal of the body. Here, the tattoo artist etches a conventional tribal dragon in black ink with its fragmented back representing the scales of the dragon. It is an eye catching tattoo for men who look for something more than Asian dragon tattoo designs.

This tribal dragon is portrayed in colour and centers around the solid black streaks quintessential to tribal dragon tattoo designs. The colour purple may symbolize an amalgamation of blue and red, thereby showing a curious mixture of calmness and passion. The Om at the center is of immense spiritual significance to Asian cultures and thus strives to represent a cool style to experiment with.

Guys who have loved Spirited Away may also like this beautiful portrayal of Haku. Contrary to mainstream dragon tattoo designs, this Japanese dragon is painted in pastels, adhering to the pristine image of Haku that Miyazaki brought forth. The ice blue colour of the dragon back coupled with the pastel flowers makes this dragon tattoo design an ethereal piece of art. Such dragon tattoos for men could be placed on the lighter side of the spectrum of dragon designs.

This Chinese dragon tattoo on arm is an unmissable inspiration for guys who like a cool dragon on their bodies. The eye catching green with vermillion blotches add a funky touch to the conventional dragon designs. Green dragons represent a close association with nature and stand as a symbol of nature and vitality. This cool dragon sleeve tattoo can also be adorned with other Japanese and Chinese tropes for added details and a hint of culture to the style.

Who said dragon tattoos for men have to be macho? This cute little Chinese dragon tattoo is an awesome inspiration to guys who love breaking stereotypes with a cool dragon arm tattoo. This blue dragon seems to have stepped right out of a fairy tale with all its shimmer and colours. The blue ink merges with pink at times, adding a dramatic flair to this small dragon tattoo. Owing to its size, you can place this small dragon on the back of your arm. You can also add and experiment with familiar tropes that you prefer for more such dragon tattoo ideas.

This small dragon tattoo on arm is a unique way to adhere to minimalism and the love for simple dragon tattoos. Fire breathing dragons are an emblem of power and minimizing their stature often leads to a compromised exhibition of their strength. However, dragon tattoo designs such as this one strive to maintain a balance by showing these creatures in a new light. Here, the artist incorporates two dragons, black and red. This red and black dragon tattoo perhaps attempts to represent a balance between passion and strength associated with the red dragons and the wrath and vengeance of the black dragons. Judging by the patterns on their bodies, the creatures could be drawn from Celtic culture and would be an apt addition to your sleeve tattoos.

Here, the small dragon with its black outlined body breathes fire, making it a cool piece to add to your sleeve. Generally, in dragon tattoo designs, dragons are not much seen as the fire breathing creatures as we know them to be. But here, the artist keeps the dragon’s body monochromatic with minute shading and line work. The flame is added with a touch of colour and brings the dragon tattoo back to life. Western dragons like this are a good choice for a sleeve tattoo, showcasing a miniature picture of power and significance. You can always refer back to popular culture for more dragon tattoo ideas.

You might have come across many dragon tattoo designs with the dragon eye vividly drawn on the arm. But this dragon tattoo on arm takes a different turn. The dragon eye is boxed in a triangle in the backdrop of a full-fledged dragon and shreds of civilization. While the design is primarily in black, the eye is filled with colours that attract attention. Characteristically, dragons are known for their burning eyes that show their own fury. Coupled with the wolf right below it, the design perhaps portrays a combination of ice and fire in this piece. You can draw inspiration from this piece and create a dragon tattoo that complements your inner spirit.

Dragons have become an immensely popular subject for sleeve tattoos for men. Primarily, dragon tattoos follow the mainstream line of Japanese and Chinese designs anywhere in the body and thus provide ample opportunities for creating your own individual design. While dealing with dragon tattoos, it is important to keep in mind their symbolism and the cultural background that they belong to. Tattoos for men can and should include more dragons as their primary subject to keep the fashion going on for a longer time. Here are a few more dragon tattoo ideas that might come in handy for you: