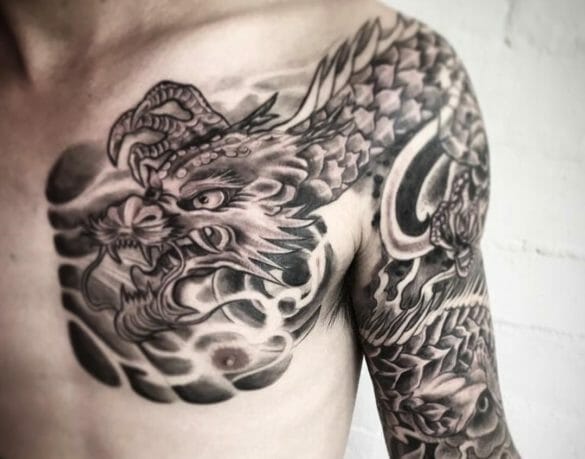 Do you have a courageous heart? Don’t miss this awesome list of cool Asian dragon chest tattoo designs to draw some unique ideas from.

Dragon tattoos with spread-out wings are a great tattoo idea for men with broad chests.

Going by the popular belief, men often tend to manifest different aspects of human nature for example power, authority, dominion, unpredictability, and rage which are commonly associated with the mythical character, dragons. Hence, dragon tattoos can be a great tattoo idea for men.

However, hinging upon positive symbolism, these mystic beasts of great proportion and dignity are predominantly popular in the Asian culture. Tattoo designs of this beast spread across your chest or as a back tattoo can emphasize the immense potential in you. Check out these cool Asian dragon tattoo designs on the chest of your choice to reveal the true character!

Dragon tattoo meaning can be perceived according to the beliefs of the viewer. The Japanese dragon tattoo that is seen in the picture is for you if you like a loud and dramatic atmosphere. Nothing can be more striking than this colourful dragon tattoo design that incorporates all the vibrant designs. The dramatic use of colour against the black backdrop in the tattoo represents a fearless and passionate soul. This combination would make up the perfect full sleeve, dragon chest tattoo for men in search of adventure on one hand and luxury on the other. The tightly packed design that can also be worn on the back symbolizes zest and vigour.

You can also wear this dragon tattoo that emerges from your shoulder and extends to the lower back.

If you like, the black ink can be replaced by a blue dragon tattoo on your chest to enhance meaning. These dragon tattoos can be extended towards the back of your body.

This Chinese dragon tattoo on the chest is a great depiction of a dragon’s rage. This chest dragon tattoo design looks great with the shades of red ink in between. This cool tattoo design covers the entire chest like a huge butterfly and the elongated, broad strokes reveal the chaos and anarchy in art. This tattoo looks best on the chest but, it will also look awesome as a back tattoo extending up to the shoulder. A tiger tattoo can also be added to this design.

As can be seen in the picture, this black Japanese dragon chest tattoo has two dragons inked on either side of the chest. This dragon tattoo seems as if the dragons are at war and the use of red ink symbolising blood represents the significance of warfare. This warfare can be symbolic of the internal conflicts that are inherent in every man. There are two snakes coiled around daggers who seem to be the protectors of the realm. In brief, this awesome dragon tattoo for men is for the conflicted ones who have a thirst for authority.

Dragons are like ultra-zealous beings with immense might. As found in the picture of the Japanese dragon tattoo design, the elaborately structured head outline and the combination of black and red ink represent men who are highly ambitious and show the conventional traits of a fiery demon. This dragon tattoo will unfold best on a large surface area, preferable starting from the shoulder to the chest. The use of red ink for the eye and the hideous smile of the dragon may reveal strength and enormity.

You can also choose similar dragon tattoos or a black tribal dragon tattoo on your chest to portray your zeal for unfolding the hidden aspects of your character.

Opposing the popular belief of dragons being associated with masculinity, women of a daunting and intimidating character can choose this cool Chinese dragon tattoo design. As seen in the picture, the small and simple red flower motifs add a dash of passion and desire to the character and make the design even more charming. This design maintains a colourful flow that covers half of the sleeve, goes over the shoulder, and ends in the middle of the chest. This tattoo design can be inked on both genders alike who have a strong sense of individuality and are willful.

This dragon tattoo will also look cool on your calf or on the back of your body.

This picture shows a black Chinese dragon tattoo on one side of the chest and a bull on the other. Both of these creatures represent all the power and might of the world. These creatures, when coming face-to-face, often create great havoc. Hence, this chest dragon tattoo design may be for men who are in search of action and are not afraid of being bewildered. This detailed art shields one’s chest at best and gives it a mythical look.

If you like, a few small red flowers or flames of fire can be added to this awesome design for further emphasis.

This bold and colorful Chinese dragon tattoo exhibits sheer funk. Pop art characterizes humor and satire with the use of bright and vivid colours along with recognisable imagery found around us. The pop-art styles observed in the dragon tattoo with a popped-out eye that emerge from the bicep and end at the mid-chest are anything but simple. This cool colourful dragon tattoo would look awesome on men who are free-spirited and wild. The blue dragon for men also symbolizes a gentle and benevolent heart that is overflowing with compassion.

This dragon tattoo design can be enhanced by adding a small black tribal dragon and can be worn on the lower back or on your calf.

This small vertical Japanese dragon tattoo on chest can be worn both by men and women. It is traditional at large due to the incorporation of the Japanese message in the white rectangle. The vivid colors of red, yellow, and black are the traditional colours of Japanese dragons. If you are looking for something small and simple yet different, this fire-breathing beast of immense power can be the best choice for you.

This dragon tattoo on the chest can also be inked on your upper back, on the arm, or anywhere on the body. These conventional dragon designs can be replaced by a tribal dragon.

Japanese dragon tattoos are very similar to Asian dragon tattoo designs showing little ingenuity. However, they can be unique in their chest dragon tattoo design like the one seen in this picture. The entire body of the dragon, barring the head, is replaced by the slithering body of a black snake. This design emerges from the wrists, covers full hand and glides towards the chest, a movement associated with snakes and dragons alike. The cool smokey background along with intricately yet elaborately drawn, gleaming scales would be perfect to exhibit a sense of unpredictability and deception.

You can ask the tattoo artist to incorporate a simple tribal dragon tattoo alongside this one.

The range of Chinese and Japanese dragon chest tattoo designs for men, a marker of the Asian culture, is never-ending. Some of the tattoo designs that top the list hold great meanings, some dragon tattoos are to reveal the pep in you, and some others are to explore the hidden elements of your psyche.

Nonetheless, the unique contents of this article have been selected with care. If you want to get a dragon tattoo out of impulse, there are several other cool Asian dragon tattoos for men, for example, a tribal dragon tattoo design or a tiger tattoo on your chest, shoulder, or back that you may want to explore.