10 Best Doberman Tattoo Ideas That Will Blow Your Mind! 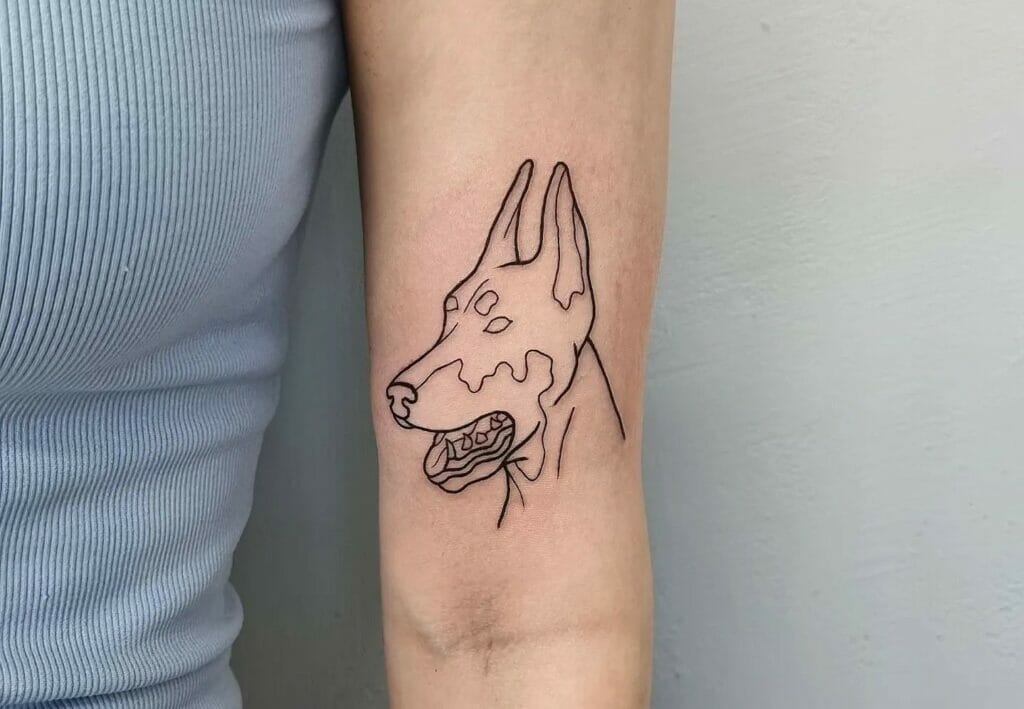 If you have a leaning toward ferocious animals, then the Doberman tattoo is one of the best choices you have in the tattoo world.

Known for its intelligence, loyalty, and ferociousness, the Doberman Pinscher is one of the best guard dog breeds found around the world.

A German tax collector and a dog pound owner by the name of Karl Friedrich Louis Dobermann was the one who first bred the species in the 19th century. Later in the 19th century, the breeding of Doberman was perfected and refined by Otto Goeller.

With a muscular body and a terrifying appearance, Dobermans are usually found with docked tails and cropped ears. The life span of a Doberman Pinscher ranges from 9 to 12 years, and the males can grow up to 0.72 meters in size. With their increasing popularity as guard dogs or pet dogs, the demand for Doberman tattoos has recently increased.

The simple Doberman tattoos are done by following the line art technique. These dog breeds are easily recognizable for their long snout, which are also incorporated in the tattoo design. Black or red ink is mostly used for this tattoo design, and the best place to put the tattoo is on the chest, back, forearm, neck, thigh, belly, calves, and shin.

The Doberman Pinscher as a breed is extremely loyal and devoted to its master. People who have Dobermans as their pets mostly get these simple tattoos on their bodies. These tattoos can also be done to reflect the concept of loyalty and friendship. Initials, names, or quotes are often added to this tattoo design to make it more meaningful and personal.

One of the most fierce-looking tattoos is the Doberman tattoo with flames. Fire is considered one of civilization’s founding elements, and it stands for both life and destruction. A Doberman Pinscher dog is extremely ferocious to its enemies while loyal to its owners. Both fire and Doberman depend on how they are handled, and when they are combined for a tattoo design, they represent duality.

With this particular tattoo, the tattoo owner reflects that they can be both dangerous and helpful and depends on how they are treated. The best place to put this Doberman tattoo is on the chest, forearm, shin, calves, thigh, and back. The Doberman is mostly done using black ink, while the flames are done using red to make it appear gruesome.

Realism is still one of the most relevant art techniques though it flourished in the late nineteenth century. Incorporating realism in the tattoo industry has become a recent practice, and the result the customers are getting is awe-inspiring. The Doberman tattoos created using realism are so lively that it is hard to differentiate them from a photograph.

With the realistic Doberman tattoo, the tattooer wants to reflect the combination of beauty and savagery. The best place to put these tattoo designs is on the back, thigh, forearm, chest, and calves. Both popular among men and women, colorful ink is mostly used for creating this tattoo design.

Marine Corps teaches all members to fight with a knife, where the weapon is considered a symbol of both danger and protection. During World War II, Doberman Pinscher was announced to be the official dog of the Marines due to their inner strength and cunning nature. Thus it can be easily understood that combining a Doberman with a knife has an inspiration and association with the military.

The tattoo owner of this particular piece was either a marine corp or still is. The tattoo can also be done as a tribute to the Doberman Pinscher dog breed for its help to the military. The tattoo particularly reflects both the dangerous and protective nature of both the animal and the military. The best place to put this design is on the thigh, shin, bicep, back, forearm, chest, and calves. They can be either done using black ink or with colorful ink, and it totally depends on the tattooer.

The best place to put these Doberman tattoos is on the neck, ankle, wrist, shoulder, shin, chest, and back. The choice of the tattoo color totally depends on the tattooer and can be either done using traditional black or colorful ink. The small tattoo design is equally popular among men and women alike.

One of the most interesting and coolest pieces of art is the Egyptian Doberman tattoo. Anubis, an ancient God in Egypt who was worshipped as the God of the dead, had the face of a wolf and the body of a man. People who are inclined towards Egyptian mythology and also love dogs often replace the wolf head with that of a Doberman Pinscher.

The concept and the design associated with the tattoo image synchronize extremely well, as both Anubis and Doberman are considered to be the symbol of death. The best place to put this tattoo is on the bicep, forearm, chest, back, thigh, shin, and calves. The tattoo can be created by using either black or colorful ink and is often ornated with pieces of jewelry and hieroglyphics. The Egyptian Doberman tattoo is both elegant and spine-chilling at the same time and will surely create a sense of awe for the viewers.

The three-headed Doberman tattoo is a mythological piece and can be directly associated with Cerberus or the Hound of Hades. In Greek mythology, Cerberus protected the gates of hell, barring the living from entering it and the dead from exiting it. Cerberus is so ferocious that it became the personification of Hell. Similar elements of aggression and terror can be associated with a Doberman Pinscher, and many tattoo lovers in that respect ink a three-headed Doberman on their skin.

The best place to put this tattoo design is on the back, chest, thighs, forearm, shin, and calves. These Doberman tattoos are mostly created either by using the line art technique or in a realistic manner. The tattoo owner with this particular piece can show their love for Greek mythology. Also, the three-headed Doberman tattoo is a masculine piece and extremely popular around the world.

To make them more meaningful, initials, words, or quotes are often used with tattoo designs. The Doberman tattoo with words or quotes is one such fine example. The best place to put this tattoo is on the forearm, chest, back, wrist, ankle, and shoulder. Both popular among men and women, these tattoos are mostly done using black ink.

With this tattoo, the owner can get inked with the name or name initial of their Doberman. This tattoo can also be done in memory of their loved pet dog who has passed away. Other objects like flowers, beads, a cross, or a clock can be added to the tattoo design to make it more interesting.

People are often fascinated by famous artworks and get them done as tattoos on their bodies. One such artwork which became extremely popular is ‘Black’ by Aykut Aydogdu, where a woman is placed among three Doberman Pinschers. The amount of beauty and elegance the image reflects has made it a popular tattoo design choice for many tattoo enthusiasts.

Many women are known for their courage, wisdom, beauty, and bravery, similar to the traits of a Doberman Pinscher. The linking of this meaning has been done so subtly and brilliantly that the tattoo image has become a symbol of sublime feminine strength. The best place to get this tattoo done is on the chest, forearm, thigh, back, and calves.

A spine-chilling piece, the snake and the Doberman tattoo will surely make your heartbeat skip. This particular tattoo is the representation of instinct and power and is mostly done using black and white ink. The snake is coiled around the Doberman’s ear or on its neck.

The Doberman and the snake are both calm and composed animals and will only become aggressive and attack anyone if they are disturbed. A similar concept is reflected by the tattoo owner of this Doberman tattoo. The best place to put this Doberman tattoo is on the forearm, wrist, chest, back, shoulder, belly, and back.

Due to its intelligence, courage, wisdom, and agility, the Doberman has been recognized as one of the best dog breeds by the American Kennel Club.

The other tattoos that can be done using the Doberman design are: