101 Best Disney Tattoo Ideas You’ll Have to See to Believe! 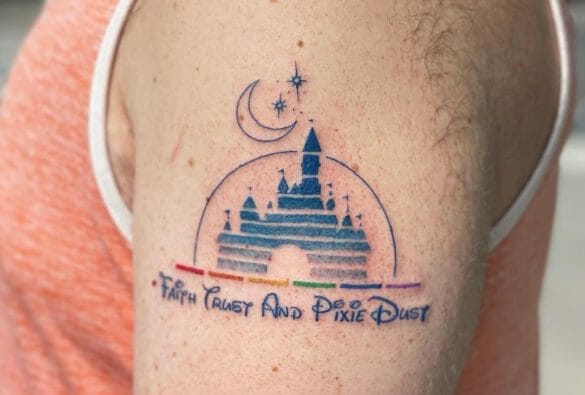 On the 16th of October 1923, Walt Disney with his brother found a small company known as the Disney Brothers Cartoon Studio.

Walt Disney, one of the most talented artists of his time, is known for his animation-themed work and Mickey Mouse. Walt Disney has also released many unique movies, one of which was Alice in Wonderland, which became a classic on its release.

One of his first successes was Alice Comedies – animated shorts. Later on, Walt Disney released the Steamboat Willie cartoon which introduced the world to Mickey Mouse and Mickey would go on to become one of the most famous creations of Walt Disney out of the many unique and popular characters that he would go on to create.

The positive reception of Mickey Mouse shorts established a belief in Walt Disney to create a feature film starring the popular Mickey Mouse which as expected was a huge success and throttled Mickey to stardom in one of several future movies and cartoons. However, it was the movie Snow White and the Seven Dwarfs that introduced the world to the magic of Walt Disney’s creation on the big screen as it became a huge hit on its initial release in 1937.

In the present day, there are only a handful of people who have not heard Disney brand name as the company has become one of the biggest media franchises. It is set in history thanks to its amazing characters and intriguing designs along with the various themed movies and cartoons that introduced the world of magic to kids ever since the 1930s. The Disney franchise has one of the best cast of characters and the sheer number of animated movies that have produced unforgettable characters on both the black and white screen and the coloured screen.

Disney characters like Mickey Mouse, Minnie Mouse, Donald Duck, Ariel from The Little Mermaid, Simba from Lion King, and Lilo and Stitch are some of the most memorable character designs and personalities that have cemented their place in the world as the classics.

The world of art has drawn inspiration from the Disney franchise and has helped recreate the lovable characters are art pieces in the form of tattoos that many look forward to getting inked on themselves.

Colourful Ariel Tattoo Design For Fans Of The Little Mermaid

The Little Mermaid is an animated musical fantasy that was released in 1989 and has gone on to become one of the best Disney princess movies. This idea is a great Disney-themed tattoo that you can get if Ariel was your favourite character growing up as you can choose this tattoo design to pay tribute to her.

This colourful and cute tattoo design is a great Disney princess tattoo idea as it focuses on Ariel as the main part of the tattoo and integrates her best friend Flounder into the tattoo design.

Owing to the flexibility of tattoos, there are several ways that you can use to change the design to get a different look as you can choose to either get this in a different shade of colour or keep it all black or increase or decrease the size of the tattoo as a means of getting it inked on your preferred body part.

This amazing-looking tattoo design is inspired by the iconic castle that we all know by now as the Disney castle. The castle has become the logo of the company and was inspired by the belief that a company creating some of the top animated content for the world needs a magical icon. The castle is known as the Cinderella castle and was inspired by Neuschwanstein Castle in Bavaria, Germany. Later, the castle had to make way for the drawing of the France-based Chateau D’usse as it replaced the once-favourite Neuschwanstein Castle.

This tattoo design takes the iconic logo and turns it into a sinister-looking castle with its dark colour tone and a haunting look as the portrait of Mickey Mouse looks on at the Disney castle with a scarred face.

This little twist in design and the incorporation of small details like the mouse-eared castle top and the eerie background make this Disney castle tattoo different from the rest and the first of many that turn away from the happy-go-lucky tone of the franchise.

Just like Mickey, Minnie Mouse has been around for a long time in the Disney franchise and is a fan favourite that millions of little boys and girls love! Both Mickey and Minnie were first introduced together on the screen in Steamboat Willie. Minnie Mouse played the love interest of Mickey.

Minnie was cute on her first appearance as she was a beauty who oozed class, had a cheerful personality, and acted in an overall feminine way. As the years passed and people got to know her more, her status as a fan favourite was solidified as she became a classic figure with tons of backstory in the black and white era as well as the modern-day.

Maleficent was introduced in the animated feature film Sleeping Beauty and was the very face of evil in the film. She is the nemesis of the cute Disney princess Aurora. Maleficent’s unique designs were inspired by the evil fairy godmother in the original Sleeping Beauty fairy tale created by Charles Perrault.

Ever since her introduction, Maleficent has gone on to become one of the classic Disney villains and her character has inspired a whole host of villains in future movies, television series, and books. In 2014, a live-action film was released with Angelina Jolie playing the persona and the movie became the best-grossing film in the actresses’ career.

If you are someone who is not a fan of Disney princesses and wants unique Disney tattoo designs instead of the common Disney princess tattoo that take a different approach then you should absolutely get this tattoo!

The tattoo sketch is taken straight out of a scene from Sleeping Beauty and adds its very own ideas and elements in the form of the colour fill that doesn’t make the tattoo too over the top.

The movie Lilo and Stitch was released in 2002 and instantly gained a cult-classic fan following thanks to the amazing cast of characters and a great story that had some over-the-top moments.

Stitch is introduced in the movie as a genetically engineered creature that was created to cause chaos and destruction and uses Lilo to avoid being captured. As the movie progresses, Stitch develops a close bond with Lilo, and with her help goes against his destructive instincts and keeps his family safe.

With the popularity of the movie, Stitch became one of the best supporting characters in the Disney universe with his quirky character and a nonchalant attitude.

This tattoo pays the perfect tribute to the cute character of Stitch and adds to the concept of companionship with intricate designs that bring out the best of the tattoo. In case you do get this tattooed, do remember that you can adjust the tattoo as you see best fit by either adding colour to the overall white style or add elements that serve as links between Lilo and Stitch.

Winnie the Pooh or more commonly known as Pooh is a character created by English Author A. A Milne and English illustrator E. H. Shepard. The Pooh stories became the finest best-selling books of their times with unique character designs and exceptional storytelling.

Following the great reception of the series, Disney licensed a part of the series from A. A Milne and adapted the stories into short animated feature films. The Winnie the Pooh franchise would become one of the most well-known franchises of all time.

This tattoo is among many Disney tattoo ideas that use their minimalistic art style to bring out the best of the concept. The portrait of Pooh is designed in such a way that even a glance is enough to know who the figure is based on. The small ear-shaped balloon links Pooh and Mickey Mouse together.

This Disney tattoo concept is great for both men and women who grew up watching Winnie the Pooh and want to make him a part of their life to get inked with. However, do remember that you don’t have to follow the exact pattern and can even add a little bit more designs in an effort to add to the beauty of the tattoo and create your own distinctive Disney tattoo.

Mulan was released in 1998 and was based around the story of Hua Mulan who according to Chinese legend, disguised herself as a man by cutting her hair short and taking the place of her father.

This iconic scene from the movie gave much-needed courage to many men and women across the globe as Mulan proves her resolve to take her father’s place in the battle. This Disney tattoo, unlike the other Disney tattoo ideas, embraces its badass nature and portrays the beauty of the scene perfectly.

The portrait of Mulan with the several blood splash designs gives the tattoo a great feel. It is a very feminist tattoo that gives a great message.

There are few personalities in the entertainment business that are easily recognized by men and women of all ages and Donald Duck is a great example. Donald was introduced as the temperamental comic foil to Mickey Mouse.

Donald is a great friend of Mickey and Minnie Mouse and has become a staple in the Disney franchise due to his funny and quirky attitude. Donald has gone through several changes in designs but for the most part of the journey, his personality has remained the same.

If you don’t want a run-of-the-mill Disney tattoo, then this funny Donald tattoo will be the perfect fit for you.

The Lion King Tattoo Concept For The Carefree Souls

The Swahili phrase “Hakuna Matata” means no worries. The phrase was popularized on a large scale thanks to the 1994 release of the classic movie The Lion King. Timon the meerkat and Pumbaa the wild boar play an important role in the movie as the adoptive guardian of Simba who was exiled from his home after his father Mufasa is killed by Scar.

Timon and Pumbaa are easy-going figures in the Lion King and live a life that is free of worries. The term Hakuna Matata is used by Timon to describe his carefree life to Simba. Since then, the phrase has been used as a catchphrase in many movies and shows.

If you are a carefree person and lead a carefree life, then this phrase from The Lion King will resonate with you and will be the perfect Disney tattoo for you.

This great tattoo is another of the various Disney castle tattoo concepts that include Mickey Mouse. As we all know by now, Mickey Mouse is the biggest personality created by Walt Disney and has become synonymous with the franchise.

This tattoo is an amazing piece of art as it takes the mascot approach and adds Mickey to the famous Disney castle. The simple yet colourful nature of this tattoo makes it easy on the eyes and it is a treat to people who love the franchise. As a tribute, this Disney tattoo will work wonders as it captures the essence of the franchise.

With all that said, here are some other suggestions for an awesome Disney tattoo: