101 Best Destiny Tattoo Ideas You’ll Have To See to Believe! 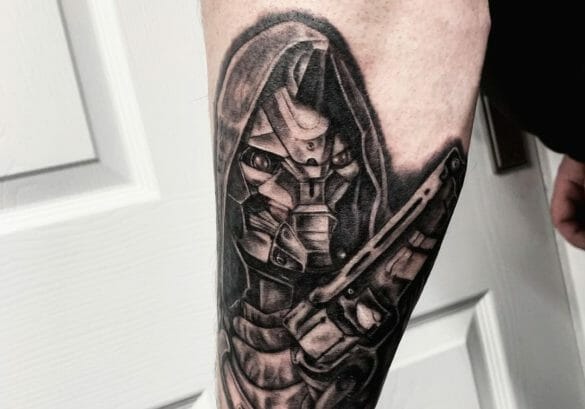 Looking for inspiration for some great tattoos from the Destiny game? Look no further! Find the best Destiny tattoos, Bungie tattoos, and more on this list!

Destiny is an online first-person multiplayer shooter that was released in 2014.

Up until 2019, Destiny was published by Activision before Bungie, the creators, separated from Activision. As of 2021, the game has a player base of 31,000,000 players.

Destiny has garnered a huge fan following over the years and fans have found a plethora of ways to pay tribute to the amazing cast of characters in the form of art and entertainment. With the significant rise of the tattoo industry, tattoos have become one of the most common ways to paying tribute to something or someone by getting them inked on your body. Tattoos based on Destiny are some of the best video game tattoos that you can get!

Destiny Game Tattoo Featuring Cayde-6 For Fans Of The Character

Cayde-6 is portrayed as a carefree character in the Destiny game series as is one of the game’s most famous characters. He held the Hunter Vanguard rank prior to his death and has garnered a huge fan following.

This Destiny tattoo is among the many tattoos dedicated to the character who played a part in the series. If you want a tattoo to pay respect to this character, then this design is among many tattoo ideas that you can get tattooed on your body!

Mara Sov is the queen of the Awoken and has perhaps cemented her place in the Destiny series as one of the most notable characters. Her strong character design is similar to that of Cayde-6 making her a fan favourite among all different age sections.

This tattoo design is among many other Destiny tattoo designs that make use of colours and great sketch work to give a unique feel to the tattoo.

Ghost is among some of the most famous character designs from the Destiny game and is someone that the player has to interact with throughout the game if they wish to continue on their quest to complete the game.

This partially coloured tattoo uses the character Ghost as the centre of the tattoo. The portrait of Ghost is framed inside a civic crown which portrays how much work Ghost does as a guide for us.

Thanks to the flexibility of tattoos, you may keep the design as it is, or you may add more elements to the tattoo as part of something that is of importance to you.

Warlock tattoo designs are are some of the most well-known Destiny video game tattoos as they are dedicated to the Guardian class who is also known as warrior-scholars. You don’t have to read much into the importance of these characters as they are powerful and great at casting elemental magic to thwart their enemies.

This Destiny tattoo uses the symbol of the Warlocks and is among some of the best tattoos that can be tattooed to pay tribute to the faction.

Lord Shaxx is known as the veteran of Twilight Gap and the overseer of the Crucible arena. Shaxx, during the Dark Ages, was a warlord but unlike other warlords, he was a kind soul. If you have read Destiny lore, then you will know that Lord Shaxx is a straight-up badass character.

The Traveler is the mystical sphere-shaped object that can be seen hovering over the Earth in the Destiny video game series. The lore surrounding the object is unclear at the moment but it is known that the age of space exploration began soon after The Traveler arrived.

This simple and clean Destiny tattoo design is great for people who are looking for a neat-looking tattoo.

This tattoo is a great example of tattoos that use two or more Destiny characters with an end result that people will absolutely love!

This stunning tattoo is an example of the few tattoos that make use of the symbolism from the Unveiling book of lore. The book was introduced in the Destiny 2 expansion pack known as Shadowkeep.

Unveiling’s content is based on the messages from Darkness, the main antagonist of the Destiny series to the Guardians in an effort to sway them from their rightful path.

The tattoo is a perfect replica of the symbol and can be a great addition to your already existing Destiny-based tattoos.

Osiris Destiny Tattoo Design For Fans Of The Osiris Cult

This great tattoo design gives a cool look to Osiris as it showcases the badass nature of the character. The flames around the portrait of Osiris are a visual treat to look at and the overall design is among some of the best tattoos based on Destiny.

The Ace of Spades is an exotic hand cannon that was used by Cayde-6 as a signature weapon. The gun is named after Cayde-6’s son, Ace.

This small tattoo design uses the Ace of Spade card design as a frame of the tattoo with Cayde-6 portrayed inside the frame. This tattoo idea is another of the many great Cayde-6 tattoos that you can get inked on your body!

The Destiny game is a great one as a multiplayer game and many people from different parts of the world play it. Destiny tattoos can be a great idea if you are a fan of the game and have a pool of friends who loves to play it. Character-based Destiny tattoos are a great way to show you love for a Destiny character.