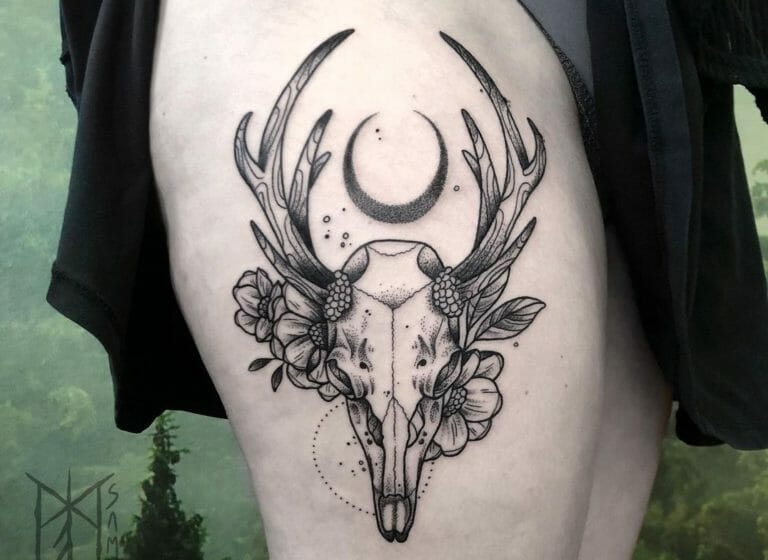 Looking for the best kind of animal tattoos that can match your spirit animal? Here is a list of the Best Deer Skull Tattoos for all you tattoo lovers.

A Deer Skull Tattoo with antlers signifies a grand look.

As tattoos grow as a form of art, the designs and their implications are getting more complex and deep. Nowadays, a tattoo can be interpreted in different ways by different people.

For example, Deer Skull tattoos can be portrait in two different ways by their owners. While a hunter can own a Deer Skull Tattoo, like a tattoo of honour or trophy, on the other hand, get a Deer Skull Tattoo to show off their love for the graceful animal, that stands for calmness, peace and the balance of life and death.

Like all skull tattoo designs, Deer Skull Tattoos are controversial too. Some people find the portrayal gruesome, violent and generally inappropriate. However, a person can wear a deer skull tattoo for various other reasons like rigidity, Spirituality, the transformation from a physical body to a spiritual one, toughness and renewal.

Deer skull tattoos can be worn both by men and women.

The modern depiction of tattoo art indulges the owner’s personal characteristics and adds elements associated with the owner. If you wear this ink, you are very likely to find people attracted not to the tattoo but to what your choice of design tells about you. The flowers used here creates a natural and more beautiful look, increasing the gracefulness of this tattoo design.

Deer Skull Tattoo For Your Chest

Tattoos, when worn on the chest, can be detailed as there is a lot more space to work it out. It has always been believed that if you are a tattoo enthusiast, you must be bold because wearing a tattoo needs you to commit. Tattoos are personal and should be associated with your personality. Therefore, enthusiasts should choose the right design to carry for the rest of their lives.

The long antlers intertwine and connect using a snake-like creature that might represent life’s different complications. It has a very Texan feel to it, almost like something taken out of wild west movies.

Women are growing more confident every day. They wear tattoos and are not afraid to flaunt them. This design is a great way to honor them.

As they move forward, taking on challenges with their head held high deserves our respect. Just like other skull tattoos that represent toughness, this simple tattoo reflects the toughness of a woman. From a mother to a businesswoman, modern women can be a great bearer of this handsome tattoo. It’s an intriguing tattoo with a badass effect that any woman would find fascinating and will be proud to wear.

Traditional deer tattoos are built on two basic ideas. One when the head of the deer is down, representing it in a protective state. Another one is when he keeps his head high at peace, confident with himself, and comfortable in his surroundings.

The design shown here is symbolism for both confidence and comfort. The skulls growing out of branches like leaves stand for the continuous growth of diversity in human nature. The tattoo starts from the upper part of your hand and runs along to the wrist of your hand, giving maximum coverage to show off your style. The appearance here is the most important part of the design as it is not only featured as a rendition of the transition of the human soul from a physical body to a spiritual one.

For people who believe spirituality is the ultimate power of the human soul and our spirituality helps us attain inner peace, getting this deer skull tattoo in your hands would be a perfect choice.

Beautiful Deer Skull With Flowers Tattoo Of A Deer Skull

Deer skull tattoos carry much symbolism like other animal tattoos, but sometimes tattoo designs are there to look cool. It shows confidence, lack of insecurities and expresses how positive you are with your skin.

A splash of colours can make a vibrant palate to create a wonderful tattoo. The right colours can depict a new meaning to the tattoo. Though the depiction of skulls is mostly gruesome, the floral design can create a wonderful contrast and give a gothic beauty to the art. The colours are also associated with many symbolism like love, anger, compatibility and many more; however, the main element lies in the beauty of the tattoo as a whole. The number of flowers used by the artist to intensify the appearance of the tattoo is also directly associated with the transition of materialistic power to more natural power.

The beauty of a tattoo lies in the design of that tattoo. Be it a traditional or a tribal one, the designs can lend a different touch to the overall appearance of a tattoo. Deer tattoos have several meanings and symbolism, one of them being a balance of life and death. A deer is as graceful alive as it is after its death. While they are believed to be one of the most elegant animals in the wild, it is considered to be a trophy to be collected after it dies. Hunters often keep a deer’s skull for their collection as a trophy and even though the act of hunting deer is currently looked down upon, many hunters used to place deer skulls above their door. Hunting a game was considered a supremely masculine action associated with bravery.

This particular tattoo, among other tattoos, appears different and has a deeper impact on the owner’s character as it is located in their biceps giving it a more masculine touch. Biceps, when contracted or expanded, are the most visual part of the body which many gym-goers tend to flex. So when in search of something that reflects your strength, there is nothing more ideal than to have a deer’s skull in your body.

Skull Tattoo Of A Two-Headed Deer

This tattoo design in respect to other Deer tattoos is very different. Though the ideas behind it are somewhat similar, this is a design for a two-headed deer.

The two-headed deer stands for diversity in a human soul. In this life, you must have encountered problems that are so diverse that you needed two completely separate solutions to tackle the same problem together. This tattoo design shows use exactly that portrayal. You can choose to get it on your chest as well as the sleeve of your hand. Getting inked with such a strange tattoo with strong implications uplifts enriches your tattoo game and you appear to be someone with strong fashion senses Be imaginative with the tattoo’s position; choose any place that you would think is the most suitable for your deer tattoo.

The most interesting part of a tattoo is hidden in the elements used to create it. If inked perfectly, it alters the image’s meaning and brings out the different variations of the same design.

What’s more interesting is that the deer skull’s meaning changes from culture to culture. Many tribal designs are built on people’s love for deers, however, many tribes show it off as a game and may choose to own a deer tattoo to show it off as a trophy and their love for hunting.

Therefore this black tattoo has different variations of meaning for different people. The shape triangle has often been connected with deer skull tattoos as a deer’s skull with its extending antlers forms a triangle shape. The triangle represents the three basic human emotions, love, spirituality and greed, where all three elements are equally important for a human mind to exist.

Deer Skull Tattoos are getting more common every day among the masses, resulting in much more innovative ideas. The tattoo design here uses the full length of your hands and includes other elements from nature.

The tattoo artist paints a detailed picture of a bird and a snake, where the bird stands for the meaning of solidarity and the snake stands for the dangers or struggles we face in our lifetime. This creates a number of different interpretations for the tattoo and will certainly feel compelling for any tattoo enthusiast to have this tattoo design inscribed on your body.

Deer Tattoo Design For Your Neck

You can choose from a number of ideas and designs before finally getting inked. However, the visibility of a tattoo is important for some tattoo enthusiasts. That is what this minimalistic deer tattoo comes in. Your neck is probably one of the most ideal places you should choose to get your deer tattoo to get maximum visibility. The shading makes the tattoo look glorious.

This deer tattoo will also show off your boldness, and help you to add some weight to your already dense character.