10 Best Deer Antler Tattoo Ideas That Will Blow Your Mind! 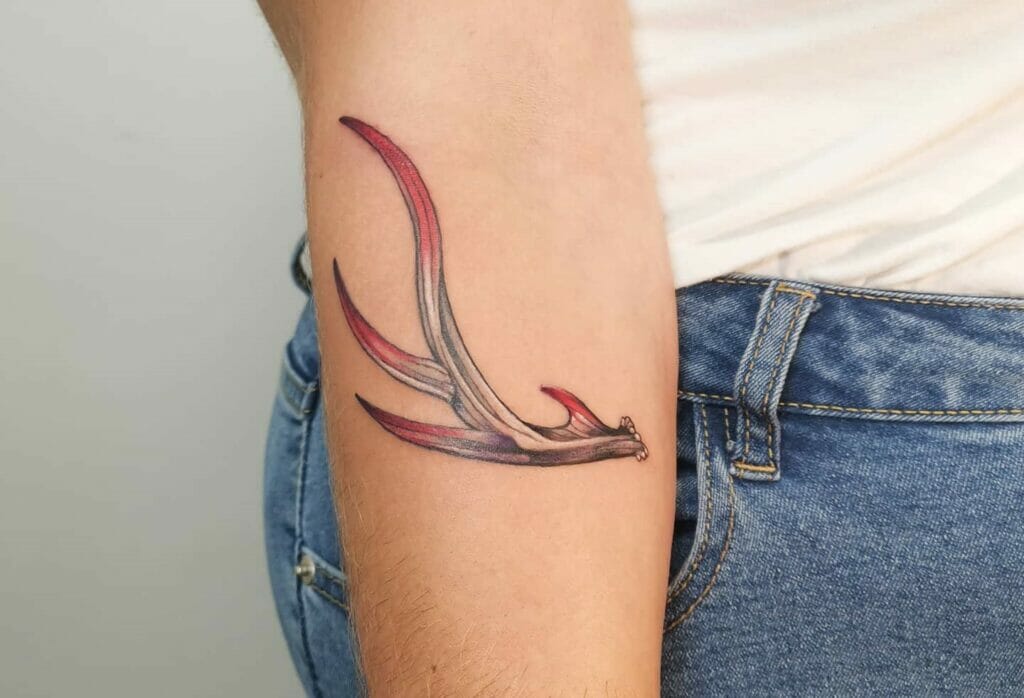 Human beings have been closely associated with deer tattoos, buck tattoos, and deer antler tattoos for quite some time now.

Just like a deer tattoo, even deer antler tattoos have been rising in popularity. This is because of the positive meanings associated with the antlers of these animals.

In earlier times, hunters would hunt down the male members of the deer family and display their antlers in their homes. The antlers, which gives deers an enormous amount of strength and ensure their safety from a few natural predators, were said to symbols of good luck, fertility, and spirituality. So, deer antler tattoos are also associated with fertility, spirituality, and good fortune, and are also considered to be signs of rebirth, grace, regrowth, and beauty. In fact, deer tattoos in general are representatives of such values. Hence, antler tattoo designs have been growing increasingly in popularity, with more and more people opting for antler tattoo designs to adorn their skin.

From the early humans, who carved deer with antlers on cave walls, to the modern humans who love “carving” deer antler tattoos on their own selves, we have certainly come a long way with this animal. Continue reading to find some of the best antler tattoo designs!

One of the main reasons why sketch tattoos are so popular is because these pieces make an individual look like a canvas. Check out this antler tattoo design as an example. Here, the antler has been inked on the arm of the person, using dark black ink and bold strokes. The way in which the antler is shown to have patterns here is quite similar to how an artist would represent a deer antler on paper. Furthermore, a single floral branch is adding more to the overall gracefulness of the design.

Whether you are a botanist or not, chances are that plants attract you. So, why not associate our deer antler tattoo with botanic motifs? While you will find quite a few examples on the internet, the image pictured above is a great choice for those who are looking to invest in a big and prominent design. The deer antler here is surrounded by leafy branches and mushrooms. The cobweb in the antler is further adding to the mystique of the entire design. You can also choose to get this inked in colours; however, the monochromatic effect suits best for such a piece.

If you are interested in a much smaller botanic deer antler tattoo, then this option could be ideal for you. The deer antler and flowers tattooed together is giving a sort of unique grace to the whole design. If you look closely, the dotted shading done on the antler and the floral components are imparting a fineness to the whole piece. Lastly, the antler and the flowers closely tied together is making the whole motif look like a bouquet.

Looking to unleash the artist within you? Then, this geometric piece might just be your perfect match! Here, the deer antler is represented along with a deer skull. The symbolism attached to such a design is quite spectacular, making this piece one of the best antler tattoo designs. While deer antlers are usually associated with beauty and grace, deer skull symbols are used for rebirth. Hence, combined together, such a piece could provide meaning to a big change in your life or within yourself. The lunar phases depicted on top is also providing further context to the change and reformation that this tattoo is portraying.

Among the different antler tattoo variations, chest deer antler tattoos are particularly popular among those who wish to get a prominent and intricate design on themselves, that they can easily conceal. Here, the deer antlers have been inked right below the collarbones, enhancing the sexiness of the clavicle. Overall, the design is quite simple and straightforward. If you like minimalist pieces, then surely get this image tattooed on yourself!

If you are looking for some other characteristics in your deer antler tattoo, then why not go with this idea? Such a design is perfect for nature lovers, as it is depicting the antler as a branch with mushrooms and leaves. Each new leaf on such a tattoo could symbolize fertility, which is something deer antlers already stand for. In addition, this tattoo has been inked on one side of the chest and appears to be perfectly appropriate for that spot.

You already know the meaning of a deer skull tattoo by now. So, if you can relate to that symbolism, this tattoo should definitely be your only viable choice. Here, the deer skull and antlers have a tribal vibe to them. In many tribal cultures, meanings like spirituality and spiritual rebirth are associated with the symbolism of deer skulls and antlers. Hence, this tattoo design could be the perfect way for you to connect with your soul and spiritual side.

For those looking for a more fierce deer skull and antler tattoo, this tattoo design is ideal. Here, the skull of the deer is occupying the centre of the chest, whereas the antlers are spread out on both sides of the chest in quite a grand way. Such a design is ideal for men who feel strong in their skin. Furthermore, since antlers are a symbol of the male sexuality, such a piece is the best way to describe a strong and courageous masculine nature.

One of the most common tattoo ideas are those that are inked on the arm. So, if you want to add ink to your arm as well, this deer antler tattoo is a good option for that. Here, a single deer antler has been inked in red, with deep and light red shading. The most eye catching part about this tattoo is the contrast it is bringing out, owing to its own colouration. Such minimalist yet noteworthy pieces are especially perfect for women, who like to keep things chic.

Interested in a deer antler tattoo that exudes aestheticness? Then, check out this design. Occupying a small portion of the arm, the deer antler here is inked together with a branch bearing darkly coloured and dotted leaves. Even though this tattoo design is monochromatic, the beautiful contrast here is created by the differently inked leaves. The size of this tattoo makes it ideal for both the forearm or the lower arm.

You might be thinking that trying to find women’s deer antler tattoo is difficult. However, your search for a fierce deer antler tattoo for women ends right here. As you can see pictured above, this piece is covering the entire thigh and is depicting a woman wearing half a deer skull with a large rack on her head. Furthermore, the antlers are decorated with ornamentations, and also has a beautiful circular frame in the background. The precise use of ink to get the right interplay of light and darkness is what is making this tattoo look exquisite. While male species use their antlers to attract mates, you can use this tattoo to attract all the attention to your fierce self!

A bird and deer antler are two contrasting symbols, that form a sort of paradox when inked together. While the meaning of an antler can be associated with strength, bird tattoos are usually reflective of a delicate nature. Hence, such a tattoo is perfect for those who find themselves as a mixture of both strong and delicate. The tattoo here is quite simple, with a small bird sitting on a deer antler. However, the body of the bird has been done extremely intricately, to perfection. The enticing mixture of light and dark shades is giving just the right visual appearance to the whole design. The deer antler, with the right amount of shading, is adding excellently to the aestheticness of the bird.

You already know by now that people associate antlers with regrowth and rebirth. If you want meanings and characteristics connected to another animal, you can certainly opt for a combination of snake and deer antler tattoo, since even snakes are animals associated with the rebirth and regrowth symbolism. Here, the snake is seen twisted all around the deer antler, almost using it like a branch. The design appears quite dark toned due to the shading, giving the tattoo a mysterious vibe as well.

Many tribal cultures made use of deer antlers to make dream catchers. So, such a tattoo would be ideal if you want to pay homage to that. In general, dream catcher tattoos are said to bring good luck. Combining that with the positive symbol of deer antlers, along with other materials like feathers, is sure to turn your life in the right direction, and fill you with a new kind of positivity!

Now that you know about the deer antler meaning and have checked out these brilliant deer antler tattoos, you can easily pick one that suits your needs. While due to shed hunting, deer antlers were prized trophies at one point, in today’s time it is best to leave this majestic animals alone in the woods, and instead, choose to get inked with a beautiful deer antler tattoo which is associated with several positive meanings. Here is a quick overview of some interesting deer antler tattoos: