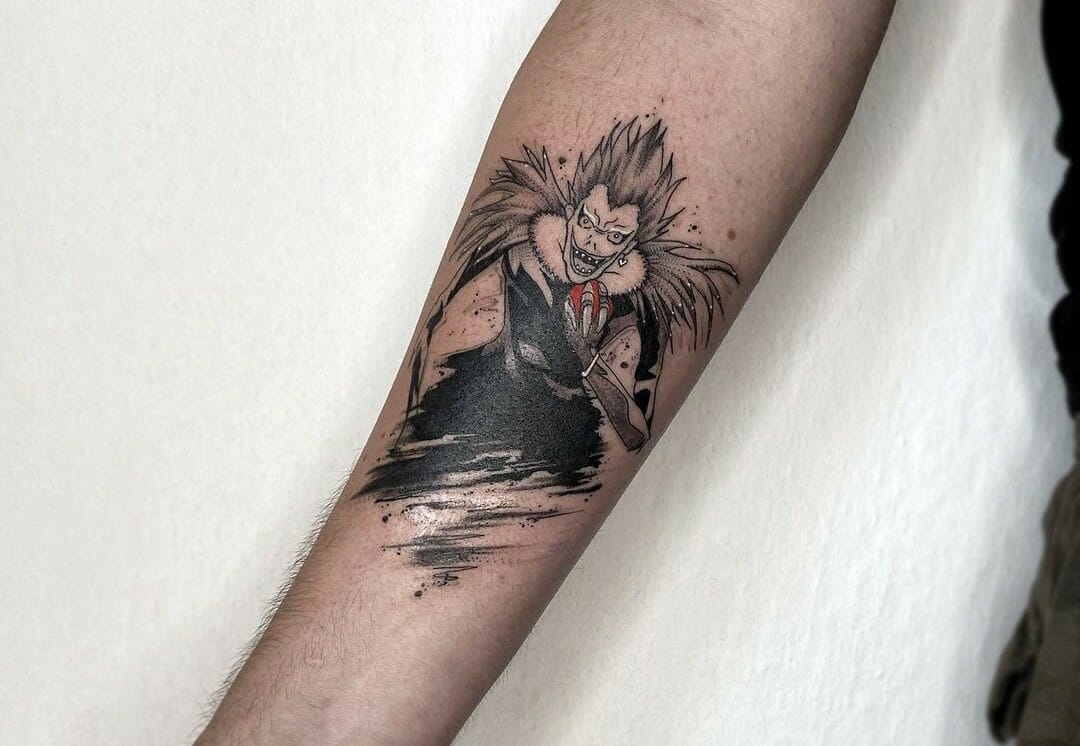 If you are a true manga fan, these ideas for a perfect Death Note Tattoo will simply blow your mind. Choose the one that best suits your persona.

Death Note is one of the best and most cherished mangas in the world.

Getting Death Note tattoos is one of the truest signs of being an anime fan. There are awesome designs out there on Ryuk, the shinigami, Kira, L, Misa and more for you to choose from.

If you are a Death Note fanboy you are most probably fascinated by the powers of Shinigami, Death Notes and the enormous power it upholds. Multiple adaptions including a live-action version of the film have been made on this anime. Whether you are Team Kira or Team L, or it is Ryuk that you find the most interesting, getting Death Note tattoos is an ultimate fandom moment that you will experience.

If you are looking for a shoulder blade tattoo of your favourite Death Note shinigami, Ryuk, this tattoo is a perfect choice for you. Ryuk is the God of death who is capable of killing someone simply because he is bored. The artist uses the flying Ryuk for the tattoo, in a pose we often see him beside Light Yagami, the current owner of Ryuk’s death note. The black and grey tattoo design is extremely detailed and hyper-realistic to look at. If ‘Death Note’ is your favourite manga, get yourself a Ryuk Death Note tattoo to pay a tribute.

If you relate to L on a personal level, maybe for his immense love for desserts or his strange and mysterious character, pay an ode to your favourite manga “Death Note” by getting inked on your arms. The artist portrays a realistic facial expression of L, with dark eye patches and jet black hair. He combines it with delectable desserts which L is known to obsess about. So, if you have a sweet tooth or feel a personal love with L’s persona, these aesthetic anime-style L Death Note tattoo is a great idea for your sleeves.

If you want a cool Rem tattoo to be inked on your skin, this Death Note Rem tattoo accompanied by Misa is one of the finest designs you can opt for. Rem is a female shinigami who has almost the opposite character of Ryuk. She is more involved in Misa’s life and helps her to take major decisions. The artist on this tattoo gives the flavour of the anime in its printed form. The incredible sketch style representation of people brings the tattoo to life. If you too view the world with a note of contempt or have a soft corner for people you aren’t supposed to, get the Shinigami tattoo as a reminder of your favourite anime.

Straight out of your all-time favourite mangas, get the most iconic page inked from ‘Death Note’ on your sleeves. The tattoo illustrated the crucial introduction between L and Kira by replicating the same page on the skin. The black and white tattoo design is for all true anime lovers who love the books as much as the series. The surprised face of Kira is a peak moment that plays the introduction to their future relationship. If you like the action-packed sequences between Kira and L, this scene is an ideal tattoo choice for you. You can also customize the tattoo with ideas if you are interested. The sleeves or the leg are the most ideal places to get these death note page tattoos. If this anime series has captured your heart, pay an ode to it by getting this unique tattoo for yourself.

If you are looking for a simple yet off-beat tattoo, this minimalistic Death Note-inspired apple tattoo is a great choice worth considering. The tattoo has an apple bite which is of the shape of our beloved shinigami Ryuk. This throws light on Ryuk’s addiction to red apples. The artist used a fine red line design to make the tattoo. You can also get the tattoo customized with the word “Death Note” written below. You can get the tattoo on any visible area of your choice, like wrist, arms, neck, shoulder, legs, or even on the back. If you are in search of minimalistic death note tattoos that are symbolic and also have our favourite shinigami Ryuk’s face in them, this tattoo is an incredible and new idea you can consider for yourself.

Misa Amane tattoo is a popular inking motif from the anime Death Note. This is an incredible choice you can opt for. Misa is a devotee of Kira’s deed of trying to cleanse the world. Upon getting her hands upon another Death Note, and trading half her lifespan for Shinigami eyes, she is chosen to be the second Kira. The artist uses black ink to create a wonderful impression of Misa Amane. It captures the moment where Misa is holding the Death Note with stretched hand. The line design and the shading technique are used to bring the character to life, especially with the white highlights in the eyes. If you relate to Misa Amane and want a tattoo to commemorate her contribution to Light’s life, these awesome Death Note tattoos are worth enough for you to consider them as an inspiration.

For an iconic symbol from the Death Note anime series, the “L” symbol is one of the best tattoo ideas for you to consider. L is a mysterious character who has kept his name long hidden to catch Kira for the crimes he committed. He mostly went with the initial L in this particular font to communicate with Kira. The artist used the same font to create the tattoo. He uses black ink and a minimalistic calligraphic design which best suits the tattoo. Because of the simple motif and small size, you can get the tattoo on your wrist, leg, arm, shoulder, or even on the upper part of your chest. If you live for the anime Death Note and love L’s character enough to get a tattoo on him, this symbol alias of ‘L’ is one of the best tattoo choices you can get out there.

Light Yagami death note tattoos have to be a fan-favourite. You might want to check tattoo ideas because they may turn out to be the perfect tattoo inspiration you were looking for. Light Yagami is also known as Kira is the current owner of Ryuk’s Death Note. He embraces the power and goes on a killing rampage of all the criminals in his town in the name of justice. The designer creates this masterpiece of a tattoo on Light Yagami, clutching the Death Note. He combines the tattoo with chits of death note floating around Light, with blood smeared on it, indicating the names of the people Light has killed using the Death Note. He also shows Kira’s real name and time of death floating above his head which is only visible to shinigami eyes. The red and black colour contrast highlights the action-packed and dark undertone of the character. You can get this tattoo on your sleeves or your legs. Death Note tattoos are a dream come true for many anime fans. If you like Kira and Ryuk’s relationship, or admire Kira for his intelligence and free will you can even check these awesome tattoos for inspiration.

Death Note Tattoos Of The Book

What better tattoo than to get the Death Note itself to get inked on you? The primary possession of our beloved shinigami Ryuk, the Death Note booklet that has the power to kill any human being with their name written on it. The artist uses the motif of an opened Death Note booklet from which dark supernatural claws are peeping out. The artist uses a very dark shading technique to set the shadowy mood. This has been done to signify the dark power that controls life and death. If you too have been fascinated enough by the mysteries revolving around this booklet, these are solely the best Death Note tattoos you can get inked with.

Death Note as a manga is a classic and is a fascinating anime. Ryuk, as a shinigami is the most recognized god of death in the history of anime. If you are in search of perfect Death Note Tattoos, there are enough designs that are going to sweep you off your feet. Choose the tattoo that best suits your persona.

Here are some other Ideas on Death Note tattoos you might want to check out: