101 Best Dean Winchester Tattoo Ideas That Will Blow Your Mind! 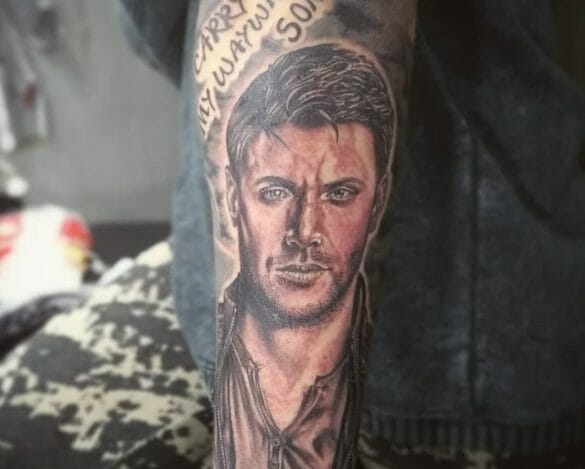 Inspired by 15 seasons of Supernatural and love for the Winchester brothers, we have the best Dean Winchester tattoo ideas for you!

Supernatural always had a wide fan base and it continued to bring out more mind-blowing seasons one after the other to appeal to their fans.

The theme of the show was to “always keep fighting” and the supernatural family was widely loved and appreciated for it. It soon became one of the longest-running paranormal-action adventure show ever.

According to the show, the Winchester brothers, Sam and Dean have the anti possession symbol tattooed on their chest to protect them from evil and demon possession. Because of this, Supernatural tattoos are pretty popular amongst fans. Not only this, but fans also have a special liking towards one of the Winchester brothers, Dean. The green-eyed resourceful hunter has a huge fan base and you will not be surprised by the number of people who would like to keep them close in the form of body art. If you are one of them, you have come to the right place as we have a list of Sam and Dean Winchester tattoo ideas that may appeal to you because of their style!

This is the symbol of anti possession or the demon symbol. It is one of the most common tattoos and by far the most recognizable one. This is the Dean Winchester anti possession tattoo. The tattoo is in the form of a five-pointed star or a pentagon that gives protection to the ones who have this symbol. Fans of the show tend to get this tattoo because it is most identifiable. Many people however tend to take it a step further and believe that this symbol protects them from “demons” or keeps the evil spirits away from them. The hunters tattoos are a nod to the series and are the perfect way to show your love for the show as well as the characters!

For those of you who have followed the show from season 1 till its end in season 15 knows the entire character development of Dean Winchester. He is funny and mischievous, yet understanding and mature. His good heart and wit soon made him a fan favourite. Dean has the powerful blood of an angel and as the story continues he is also shown as a devil. This tattoo expresses exactly that. The left half of the tattoo has demon-like eyes bloodied nerves. Right below the face, his name “DEAN” is written. This tattoo has a very intricate design. The tattoo artist has created a marvel to look at. Each hair on the head and the beard is full of thin strokes and beautifully inked. A perfect tattoo to show that you are indeed a true fan of Dean Winchester!

A Tribute To Odin

If you and your family are Supernatural fans, this is the perfect matching supernatural tattoo that you and your friends/family can get just like the Dean and Sam Winchester tattoo. The tattoo shows the symbol of the anti-possession. Some people believe in the powers of the tattoo, while some of them just want it for the sake of its beauty. The pointed star within and the circle of fire outside has a certain charm to them. However, many believe that whether you know or believe in the meaning of the brothers tattoo, it will always protect you from evil. The clients in the picture are a mother-son duo who got these matching tattoos and are fans of the show and want to save each other from the eye of evil.

All you Supernatural fans out there remember the time when our beloved Dean was killed by an angel and he returned as a demon and the knight of hell? He was later brought back to his original self by his brother, Sam who used his purified blood to save him. This tattoo design is a cute twist on demon Dean. This design represents a bobblehead of the time Dean was a demon. Now, not many of us like this side of our beloved Dean, however, it reminds us that no matter how hard things become, the good in you will always come forth with the help of people you love.

Not all tattoos have to have a deep secret or a hidden meaning. Some tattoos are just meant to show your love towards a particular character or the show. This tattoo is a perfect example of that. It shows our favourite green-eyed demon hunter holding a pie. A beautifully detailed tattoo of Dean Winchester holding a pie. On the side it is written, “Eat pie and kill demons”. Like we know, Dean associated pie with comfort and possibly his mother, from where his love for pie actually came from. This tattoo is a simple one but will definitely portray your love for all things sweet (dean and pie).

We All Have Our Demons

More and more people have this idea of demon Dean because this tattoo design reminds us of the tough phase that he went through. Not many main characters that are wildly loved are turned evil at the wink of an eye. However, when the storyline of Dean as a demon came through, it may not have gotten much appreciation, it did make people see a different side of the “good guy”. It made them believe that not everybody has to be good and everybody may have a little evil inside of them. The tattoo artist has done a great job at recreating the face of Dean Winchester and has the phrase “We all have our demons” written below it.

Over the years, we saw Dean Winchester grow from a young boy to a mature person who is adored by everyone. He went through a lot in his life, he lost a lot of people and sure made a lot of new relationships. But there were two people who always remained his constant and would do anything to help him, Sam, his brother and Castiel, his best friend. They helped him turn into a powerful demon hunter and eventually an angel. He was broken but they held him together. This tattoo is of the young and innocent Dean who still had a lot to get through and would eventually become a fan favourite. Another beautiful piece of art by the tattoo artist.

The fan following for Dean Winchester only grew over the years. Some loved his wit and charm in the show and some loved Jensen Ackles, the actor who plays Dean Winchester. To maintain the love, actors have to make the audience believe in their characters, this is what Jensen did. In the course of the show, Dean went through a lot of different phases, but what remained constant was the love for this character. If you love Dean Winchester, this is a cool way to show it! Tattoo Dean Winchester on your skin and pour your love for handsome Dean.

A true Supernatural show fan is aware of the meaning behind this tattoo. The client has gotten a tattoo of Castiel and Dean on each of their legs. Because of this tattoo, you will get a sense of friendship between Castiel and Dean. Castiel was a fallen angel, like Lucifer and he was responsible for saving the lives of Sam and Dean on multiple occasions. He was also responsible for bringing Dean back from hell. The bond between them is mentioned throughout the show. This tattoo artist has made this tattoo on one person, but you can get a twin tattoo with a fellow Supernatural fan of Sam and Dean or any of your favourite characters.

This is like a demon tattoo. It represents the time Dean Winchester transformed into a demon right after he returned from hell. You must have seen different kinds of demon Dean tattoos, but this one is a little different. It is a great tattoo. The client tattooed this on their thighs, but this design can vary in size and can be inked on any part of the body. You can get this on your shoulder where everyone can see it, or you can get it in the middle of your back. This will make for a great tattoo as it will remind you of right over wrong.

If you are a fan of the show, Supernatural, and love Dean Winchester, there are some great permanent tattoo ideas for you. Dean Winchester is one beloved character who went to the “other side” and came back as evil, but his brother and friend saved him from it. It reminds us that no matter what, there is always a good side in every person which overpowers the wrong. If you are thinking of getting a tattoo, a Dean Winchester tattoo is a great idea!

What is the meaning behind Dean Winchester’s tattoo?

How much did Dean Winchester’s tattoo cost?

How long did it take to get Dean Winchester’s tattoo?

It is estimated that it took Dean Winchester over 40 hours to get his tattoo. This is because the tattoo is very detailed and it covers a large area of his body.

How did Dean Winchester’s tattoo become so popular?

Dean Winchester’s tattoo became popular because it is a symbol of strength and resilience. It also represents the bond between the Winchester brothers. The tattoo has become an iconic image and it is recognized by fans all over the world.