10 Best Deadpool Tattoo Ideas You’ll Have To See To Believe! 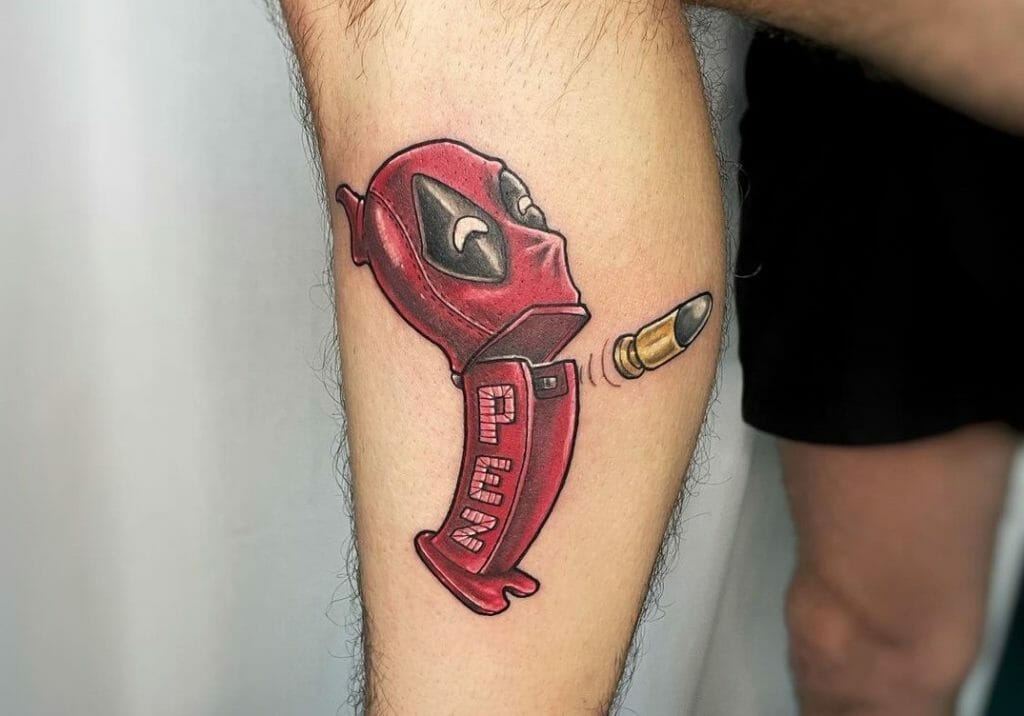 If you are a Marvel fan and absolutely adore Deadpool, then you have come to the right place. This list of Deadpool tattoos is a must-read for you.

Like most of the Marvel superheroes, Deadpool needs no introduction.

Wade Wilson a.k.a. Deadpool became a rage among comic fans with the 2016 ‘Deadpool’ movie which had cast superstar Ryan Reynolds as the titular character. The blockbuster reception of the film ensured that it would be turned into another franchise with the sequel dropping a couple of years later.

But why this sudden craze for a particular superhero when there are probably dozens of comic heroes having film franchises, TV series, and even games dedicated to them already. Well, Deadpool is not your typical run of the mill superhero. He is perhaps the craziest of the lot and Reynolds’ accurate portrayal of Deadpool’s character quirks and a highly successful PR campaign being run on all the social media platforms seem to be the reason behind the incredible popularity being enjoyed by Deadpool. The background story is lacklustre with a typical merc, Wade Wilson, being experimented upon by an evil villain only for everything to go wrong and Wilson found himself with these superpowers. But the absolute craziness of the character seems to be what drew the fans in hordes and Deadpool tattoo designs became hot stuff since the past couple of years. So if you are one of those crazy fans looking for a cool tattoo of your favourite comic hero, this specially curated list of Deadpool tattoos are for you.

Black and grey are the classic colours and the primary choice for any type of tattoo. However, confused fans would like to know how the iconic red Deadpool suit will look in those monotonous colours. Well, these types of Deadpool tattoos will surely end all those speculations. Deadpool’s classic bright red suit does not always need colours to achieve a dynamic appearance if the shading of these tattoos is executed perfectly. Notice how the masterful technique of shading will separate the darker shades from the light ones, lending the overall design a crisp and stunning look. However, search for an experienced, professional tattoo artist who is acquainted with solid linework and shading techniques for the tattoo to be done right.

The Friends And Deadpool Crossover Tattoo

This Deadpool body art happens to be one of our most favourite. It brings the best of both comedy, satire and bit of seriousness in the comic lore. No wonder, a great tattoo with Friends pose would look great. And the best part is the whole design which brings a fusion between Marvel Heroes and DC heroes? All these characters are arranged to seat in accordance with the F.R.I.E.N.D.S cult pose, with the name of the show looming in behind. This Deadpool tattoo design offers you the best of both worlds (Marvel and DC) and then some more!

The Deadpool Tattoo For The Pop Culture Fans

Imagine some of the most brilliant yet notorious minds of the universe, both reel and real, together in a mock seating arrangement of Da Vinci’s famed painting ‘The Last Supper’! There is the eccentric scientist Rick from Rick and Morty, the notorious criminal genius Joker, the crazy hero Deadpool, the fan favourite Yoda, the lovable Bart Simpson, and Albert Einstein himself. We doubt anybody could come up with a cooler idea than this one! Get this one and be the centre of attraction of your friend circle.

The Guardians Of The Galaxy And Deadpool Tattoo Sleeve

For the die-hard Marvel fans with a liking for tattoos, it is never too many no matter how many characters you cram in their favourite piece of body art. For those tattoo enthusiasts, these types of tattoos are perfectly suitable where suited Wade meets the Guardians of the Galaxy. The hyper-realistic Deadpool’s tattoo is coupled with some of the fan favourite Avengers – Groot and Rocket. These cool tattoos inspired by the Avengers’ films throw Deadpool into the mix of heroes, thus satisfying fans who have been clamouring for Deadpool’s presence in the hero ensemble ever since the ‘Deadpool’ movies hit the theatres.

The Deadpool Logo Tattoo For First-Timers

Some tattoos can be complex and a bit too much for many people. Especially if you are a first-timer looking to get inked for the first time or someone on a tight budget, some tattoo designs might be quite a bit difficult for you. If you fall in either of the above categories, fret not we got you covered. This Deadpool logo is not only a little and simple tattoo, but the minimal approach gives it a rather cool look. These types of minimalist tattoos are not only cost-effective but also need very little space and commitment for the customers. Hence if you have never got any tattoos before, go for this cool one surely.

It is quite hard to find people who do not like the ‘Lego’ film franchise and even more hard to come across who hate both the ‘Lego’ and ‘Deadpool’ movies. So it is ingenious to combine some of the most lovable characters to create these Lego-themed Deadpool tattoos for the fans who want the best of both. These Deadpool tattoos inspired by the Lego characters are not only lovable and cute but also includes the characteristic eccentricity of Wade and the charisma too. These small Deadpool tattoos will melt the heart of almost anyone you show them off to.

The Deadpool Tattoo For The Original Comic Book Geeks

Much before Ryan Reynolds was roped in to play the merc Wade Wilson in the ‘Deadpool’ movie franchise, the character was already popularised by the 90s comic book culture. Geeks swore by these comics and identify themselves as the original fans of the character as they knew him many years before the movie franchise hit the theatres, making Wade almost a household name. If you are such an enthusiast who swears by the comics rather than the movies, then these Deadpool tattoos are apt for you. These tattoos use the 90s comics as a reference and create compelling narratives by borrowing the template from these original comics. The yellow speech bubbles usually contain some of the most iconic dialogues of Deadpool, and you can customise these designs accordingly. You can select any panel from the best Deadpool comics of your choice and show off to your buddies.

Some of the key reasons behind the raging popularity of Deadpool as a character is not only his flamboyance or love for theatrics and the abundant pop culture references throughout the movies but his nonsensical attitude and sarcastic quips. Wade not only mouths some of the best dialogues of the Marvel Universe but his eccentricity throughout the films have earned him the endearment of the fans. So a list of Deadpool tattoos is incomplete without the iconic red-suited Wade holding a badass firearm such as a rocket launcher in his quintessential style and aiming it towards other people – much like in the movies where he kept breaking the fourth wall and addressing the audience. This surely is one piece of body art to die for.

The Harley Quinn And Deadpool Tattoos For Anarchists

There is no other way to describe the likes of Deadpool and Harley Quinn better than those immortal words – “Some men just want to watch the world burn.” (And sometimes a woman as well!) Wade and Harley are the two most eccentric characters ever to be introduced in any fiction and possibly the most loved as well. They love chaos, anarchy, unsettling the powers of the world, and fight some bad guys in due process. Their twisted sense of justice and logic are only what matters to them and nothing else. So if you are someone who faces the same kind of problem answering to authority, these types of tattoos are just for you.

The Venom And Deadpool Tattoos For The Antihero Fans

One of the main reasons why Deadpool and Venom are so popular among fans is that they are seldom black and white characters – instead, they loom in the grey region of our moral compass. People are really tired of films almost always depicting their protagonists and antagonists in a one dimensional way, with the antagonist always being defeated at the end. So Marvel decided to take matters into their hands and churned out standalone films of these antiheroes who are not one dimensional but realistic – characters who are not inherently evil but normal people who made some really bad choices in life. So if you can relate to them, get a piece of the action by having these tattoos inked on your body.

Wade Wilson or Deadpool tattoos are trending within the tattoo communities presently and will continue to do so as long as new ‘Deadpool’ movies are dropped periodically. But think before blindly jumping onto the bandwagon and getting a Deadpool tattoo yourself – whether it goes with your personality and style statement. These Deadpool tattoos are mostly a costly affair and need to be pondered over before getting one. And if you are sure you want one of these tattoos, always ensure that you have selected a professional and experienced tattoo artist who possess the skill to execute them flawlessly.