10 Best Deadly Nightshade Tattoo Ideas That Will Blow Your Mind! 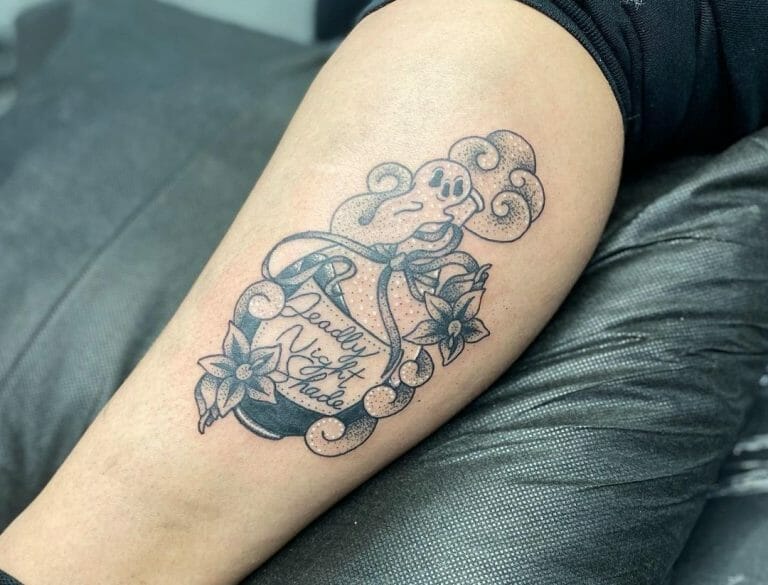 Night- the site of mystery, unheimlich, darkness, melancholia and of course, death.

And which plant can be more apt to represent this phase of the day than the one that contains “night” in its name? Yes, none other than the deadly nightshade from folklore mysteries.

Also called belladonna, meaning beautiful lady, the plant has gained an incredibly mysterious aura over the ages. Consequently, it has become a rave icon of pop culture, which includes tattoos, of course. Tattoo companies frequently feature and offer discounts on deadly nightshade tattoos.

A look at these top 10 tattoo design posts will make it clear why.

Fans of the Potterverse will definitely recognize the central motif of this tattoo- Grim, the Animangus of Sirius Black in his utmost magnificence. He is standing poised, as the harbinger of death, awaiting his victim. The creature is inked within a seal-like emblem, an elongated leaf blade from the deadly nightshade encircling it, with the pompous claim of having taken the life of Sirius Black.

The Atropa belladonna is dotted in dotted black ink. It forms just the perfect companion to this Grim seal, for like the Animangus, it too has the same fatalistic symbolism associated with it.

Called primroses with a curse imposed upon them, nightshades were highly revered in the Victorian era. Similarly, werewolves- one of the most dreaded, and deadly creatures of the night, are a victim of the lunar curse. And when two cursed offsprings of nature meet in a tattoo, they create the most seductively fatal emblem to adorn the skin.

This tattoo will offer an interesting take on all these folklore legends. The exquisite detailing in the howl of the wolf, and in the nightshade flower drawing deserves applauding comment. People fascinated with medieval European folklore ought to give this a try.

Quite a quirky work of art, this tattoo design will be much appreciated by those who prefer out-of-the-box tattoo ideas in a darkly comical manner. This particular belladonna tattoo features a frog climbing a twig with a thorny fruit, carrying deadly nightshade in a tiny flower pot over its back. The design appears to be deceptively simple, but careful scrutiny reveals the painstaking dot work that is involved in creating the accurate shadings on the back of the frog, over the leaf and petals of the nightshade.

Lovers of pagan mythology, here’s one for you! Celebrate your passion by getting inked with the lethal combo of the pitch-black crescent moon and sinister-looking Atropa belladonna design. The artist has dexterously used monochrome to emphasize the blood dripping from the leaves of the nightshade. It enhances the mystique appearance of the sharply carved moon.

For those who prefer arm length tattoos, this deadly nightshade tattoo sleeve can be a tantalizing option. What we love about this black nightshade tattoo is the generous use of chiaroscuro shading to fill the spaces within the minutely detailed images of the wooden cove and the belladonna saplings encircling it. The light shading of the cove-top gradually darkens into a more enticing shade of pitch black, the further down the body the deadly nightshade flower tattoo is etched.

In love with the Tim Burton classic which featured the belladonna? Yes, that very deadly nightshade is etched on the skin of the model in this image. The artists have put a twist on the familiar image of the NBC deadly nightshade tattoo by making the plant emerge from a cauldron, labelled with those familiar, bloodcurdling words: Nightmare Before Christmas.

While initially the plethora of things on this tattoo might seem overwhelming, we cannot help but comment on the exquisite detailing of each plant. Be it the belladonna, or the Venus flytrap, and the thistle berries, each done with love and precision. Introducing fox skull, beetles, and butterflies make the slickness quotient way higher!

Often you must have come across tattoo sites featuring mason jar tattoos. Kudos, it’s time to get your own, but with a spooky twist. Another variation on the deadly nightshade tattoo nightmare before Christmas, this one will instantly transport you to the world of Sally and Jack where Sally used dainty mason jars to keep her spooky ingredients for a potion- Deadly Nightshade, Worm’s Wort and Frog’s Breath. For the apothecary in you, who would like to fancy themselves as Sally, we share the perfect deadly nightshade contained in mason jar tattoo.

Make your spookiest Poe-induced Gothic horror fantasies come true! The central attraction of the nightshade tattoo is The Raven but in a menacing skull form! Like the hallucinatory powers of the nightshade, a stare from the Raven was enough to drive Poe’s narrator mad! As usual, we have chosen this particular design for its spectacular ink work using a black tint.

Last but not the least, we have featured one that takes the mysticism angle quite a notch high. What you see here is the cross-section of the nightshade plant, literally rooted in death. Behold in awe as the bewitching belladonna spreads its “dead” ly roots all over your skin, with skeletal fingers in place of actual roots. This tattoo is perfect for etching on a wide area of the body, preferably the back or chest.

The nightshade has gained steady popularity as a symbol of death and beauty. Hence, it is no wonder why people love nightshade tattoos. While black ink is usually preferred for highlighting the texture, vibrant hues are also preferred.

Loving these? Then you ought to know about some more nightshade flower tattoo designs for your next body art session: