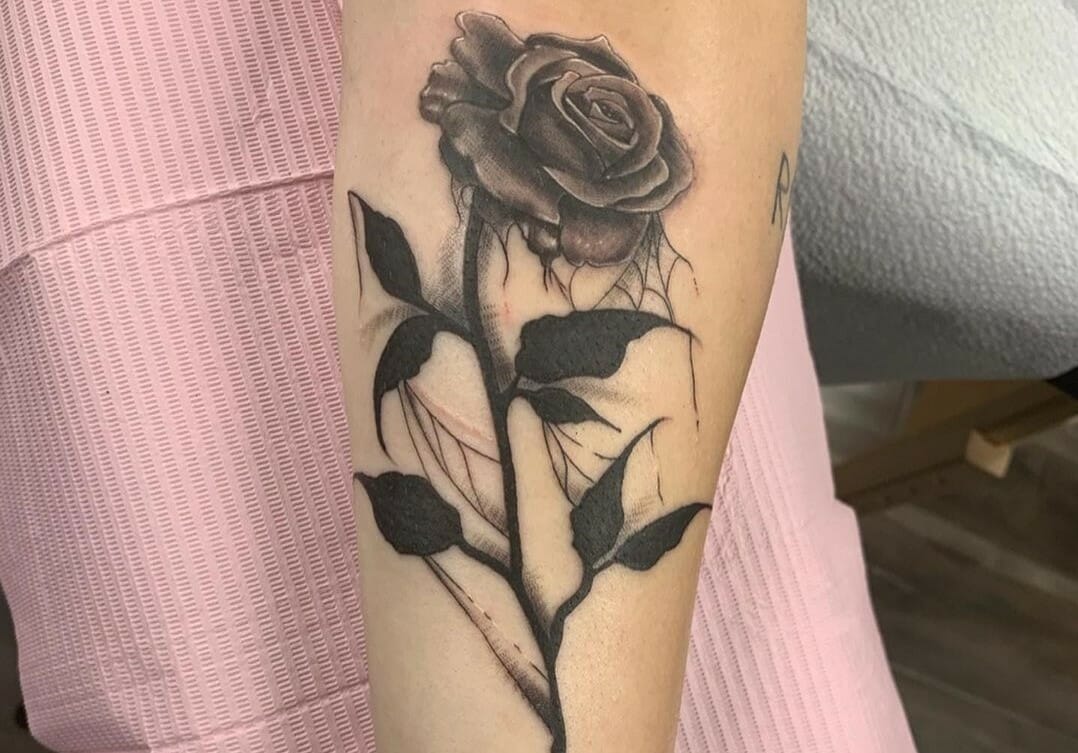 Looking for some creative dead rose tattoos that match your style? Here is a list of some aesthetic designs to help you get inked!

A dead rose generally symbolizes the end of something beautiful, particularly a romantic relationship or a loved one.

A rose is an object manifesting beauty, romance, and strength from ancient times. While a rose tattoo is a popular style among men and women, a dead rose tattoo is a simple piece to show greater experiences and feelings.

Dead flowers represent death and desolation but a dying rose envelops many variations. A dead rose tattoo meaning could be associated with its colour. For instance, a dead red rose is a symbol of a fading romantic relationship and heartbreak, while a dead yellow rose stands for the loss of a friend. On the other hand, a dead pink rose and a white rose show the lack of joy and purity within oneself. A dead rose tattoo can thus effectively portray the wearer’s personal turmoils, becoming a symbol of their true acceptance of life as it comes. Dying roses could also show the bold side of you that refuses to shun away dark times. Read on to find some of the most intriguing dead rose tattoo ideas that reflect the real you!

Here, the dead rose is paired with a dagger that attempts to cut it off the stem. This tattoo could be a reminder to discard the burden of negativities and usher in hope. The briefly outlined representation of the dagger beside an intricately designed rose draws attention to the dark centre and faded petals. The black thorns and buds add to the beauty of the art, making the piece come alive. This distinctive tattoo could be the right choice if you love a meaningful design.

This tattoo portrays red roses with a touch of death. The hollow skull is embellished with dying roses to give the design its required edge. The transition of ink from black to colour poses the ombre effect, adding a dramatic flair to the style. The roses co-existing with such a ghastly skull makes it almost a devilish image meaning to express one’s off-beat personality. This tattoo is a perfect fit for the back like the one shown in the picture.

A simple design like this does full justice to minimalism and the dead rose tattoo idea. The drooping red roses add a pop of colour to the overall tattoo with black ink. The red roses are brilliantly drawn to keep minimalism intact. Owing to its small surface area, this tattoo can be placed anywhere on your skin, and still attract glances. A pretty design like this is aptly fitted for people who are meaning to get such small dead rose tattoos.

This tattoo is truly remarkable for a quirky idea. The representation of beauty in life and death is compared and contrasted through the two roses. While death holds a full-bloomed rose, life has a dying rose. The image can be a critiquing symbol of the often believed idea that life is beautiful no matter what. This design attempts to break the stereotypes associated with the concepts of life and death. If you are someone who thinks differently, this simple yet purposeful rose tattoo in black could be your pick. You could also post it on social media for a day filled with appreciation.

Dead Rose Tattoo With Skull And A Crown

This rose tattoo screams danger with pride. Plain black ink is used to avoid overcrowding in the design. The skull that is commonly associated with death here becomes a symbol of unfazed courage and undying rebellion. The crown on the skull adorned with the dying roses celebrates the fearless spirit of the wearer. The skull could be made a tad bit more menacing by adding a tinge of white to it. The flower compliments both the art and the strength of the individual. If you are someone with a dark personality and have the attitude of owning it with pride, this rose tattoo makes a perfect fit for you.

This tattoo looks simple with the black rose outline but contains a hidden meaning. The dying flower is devoid of colour and perhaps symbolizes a white rose. Such a design may represent the loss of purity and innocence with the death of a loved one. The great detailing on the skeletal hand looks particularly striking with the definite outlines on the flower. Plain black ink is best fitted to convey minimalism and symbolism. This rose tattoo may be inked on the forearm for better exposure and attention to its intricacies. People who avoid a great number of tattoos would find this small design a good substitute.

If you are someone who likes things out of the box, this rose tattoo could be the end of your search! Often rose tattoos show variation in their designs but rarely are they seen in a frame. The single-lined black frame adds the illusion of a three-dimensional rose. People who love monochromatic tattoos would find a great liking in the use of black to highlight the rose petals. You can get this beautiful piece inked anywhere you want or on the upper thighs as is shown in the picture.

The idea of blood associated with a rose alludes back to Greek mythology. The Greek goddess of love, Aphrodite is often depicted with roses, the flower being a remembrance of her lover Adonis who was slain, and there grew a bush of roses. But the idea is further twisted when a dead rose occupies the centre and diminishes the promise of forever. Thus, a dead rose soaked in blood perhaps symbolizes the lamentation of lost love and a dying forever. The bright red of the rose has turned pitch black and serves as an important contrast to the blood spilt all over. The black outline on the flower draws attention to the colour gradient. This unique reversal of the traditional red rose tattoo would be apt for people who want to experiment with colours and meaning.

This tattoo design makes the dying red rose an eyecatcher. The elaborate design of the raven in black shows much detailing and textures. The raven’s outcry paired with the lone, dying rose could serve as a symbol to represent bleakness and desolation. Colours are carefully picked to avoid vibrancy while conveying such a message. Faded red and charcoal grey complement each other to bring out the meaning of this piece out front. This could be a popular choice for people who love elaborate tattoo designs.

A dead rose design completely in black is bound to make an attractive piece on the wearer’s skin. A black rose tattoo is commonly done in the memory of a loved one who has died. The design is a fairly popular one owing to the beauty of the colour of the skin. People also believe this tattoo design could mean a symbol of hope and strength. With its pitch-black leaves and stem, this tattoo would look good anywhere you want on your body. The forearm could be an ideal place for such a tattoo, apart from the chest as shown in the picture.

Dead rose tattoos represent different meanings for different people. Now that you have known some variations of this tattoo, you can search for inspiration and experiment to craft a unique style that suits you best. Whatever be your style, a dead rose tattoo will become an emblem of hope and strength, complementing your personality better. Here are a few suggestions to help you style your dying rose tattoo: