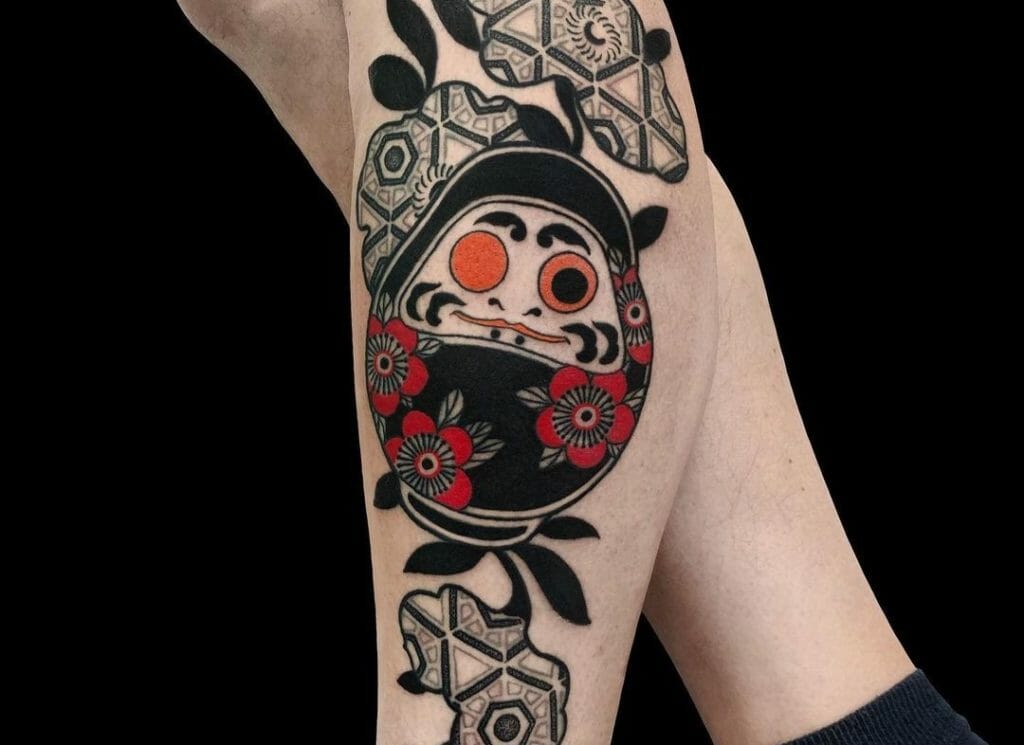 Are you looking for a tattoo that shows Japanese culture or Buddhist religion? Then here are some amazing Daruma Doll tattoo designs for you to check out.

A Daruma doll is a Japanese doll inspired by Bodhidharma.

Bodhidharma was the founder of the Zen sect of Buddhist religion. The Daruma doll is hollow, round in shape and red in color.

The doll shows a bearded man with a noticeable moustache. The design of the Daruma dolls also differs a lot based on the region where they are being made and the school of the artist who is creating the dolls. These dolls are mostly made of papier mâché and have been commercialized by Buddhist pilgrimage and tourist centers. The Daruma dolls are believed to bring good luck to the person who keeps them and is considered a gift of encouragement. A famous symbol of Buddhism and the culture of Japan, the Daruma doll is full of symbolism about perseverance and dharma since Bodhidharma created the Zen tradition years ago.

The Daruma doll has a rich history and is considered to be a symbolism for health, wealth and fortune along with perseverance. This red, upright doll made of is considered to be symbolic of good luck in Buddhism. If you want to get a simple tattoo of Daruma doll, then you can ask your tattoo artist to create a minimal design which pays respect to the founder of Zen tradition, Bodhidharma. Such a tattoo will also show your wish for good fortune in your life.

The popular Daruma doll is known for its history in the world and especially in eastern Asia. It is symbolic of good fortune and people often gift Daruma dolls to others in order to wish the recipient or new owner with wonderful blessings and longevity in life. This style of doll created after the monk Bodhidharma, this doll is known for its upright, round shape. It is also bright and vivid red in colour. Consequently, if you want a colourful tattoo that reflects Japanese culture, you can ask for this tattoo. The beautiful and vibrant red colour of the doll will add a splash of colour to your body art.

Cute cats are a huge part of East Asian culture. We have all seen the Welcoming Cat doll in different shops and in tattoo designs. Consequently, if you are a cat lover, you can also combine cats with your Daruma doll tattoo and create a cute tattoo. The eyes of the monk can be replaced with the face of the cat but the idea would still remain the same, of wishing someone well in their personal life. This will be a unique and popular tattoo idea for you to get!

Here are some wonderful Black Cat tattoo ideas for you to check out in case you need some inspiration.

If you are looking for a Buddhist tattoo or a Japanese tattoo, then you might want to get a Daruma doll tattoo. The Daruma doll tattoo meaning can be quite personal as people purchase them to give to someone as a good wish. The doll tattoo can be quite unique with its beautiful eyes and round shape. In addition to that, you can also add floral motifs or flowers to the tattoo. As seen in the picture, this will elevate the beauty of your tattoo.

You can opt for any flower you like or love the most to add to your tattoo. In addition to that, if you are looking for more inspiration, you can also check out these beautiful Blue Rose tattoo designs.

The Daruma doll is made of papier mâché and has been a popular and famous part of the culture of Japanese culture. This doll, inspired by monk Bodhidharma, with big eyes, round shape has been created by artists in Japan where people gift each other the doll as a sign of good luck.

If you approach an expert tattoo artist, you can ask them to create a detailed and complex tattoo for you. The ornate, nuanced tattoo design will look amazing on your chest, shoulder or back.

If you want to get a Daruma doll tattoo but do not want one in the conventional, traditional style, you can easily design an unconventional and quirky tattoo. As seen in the picture, the block painting style tattoo looks incredibly amazing! In addition to that, the warm colour palette with bronze, yellow, and vermillion tones look beautiful as well.

A lot of people think Daruma doll tattoos are only for arm sleeves, chest, shoulders or back. However, you can also get a Daruma doll tattoo on your legs. As seen in the picture, the back of your thigh or calves are a great place to put your tattoo.

If you are looking for an expansive tattoo to cover the upper part of your arm, you can definitely look for a Daruma doll tattoo. Instead of the conventional red colouring, you can also choose a black and orange colour palette as seen in the picture. The large tattoo done in neat, clean strokes will look amazing on your bicep. The cloud symbols are also adding to the beauty of the tattoo.

SInce this tattoo has been inspired by a Buddhist monk who started the Zen tradition, you can also add other religious motifs and symbols to your Daruma doll tattoo. Consequently, you can check out these amazing candle tattoo ideas to include in your tattoo.

In 2021, a lot of people are getting tattoos which are meaningful and profound to them. Consequently, if you are from Japan or are a follower of Buddhism, you can also get a tattoo that expresses your national culture or religion. So go ahead and get a wonderful Daruma doll tattoo after choosing a design that you like the most.