101 Best Darth Maul Tattoo Ideas That Will Blow Your Mind! 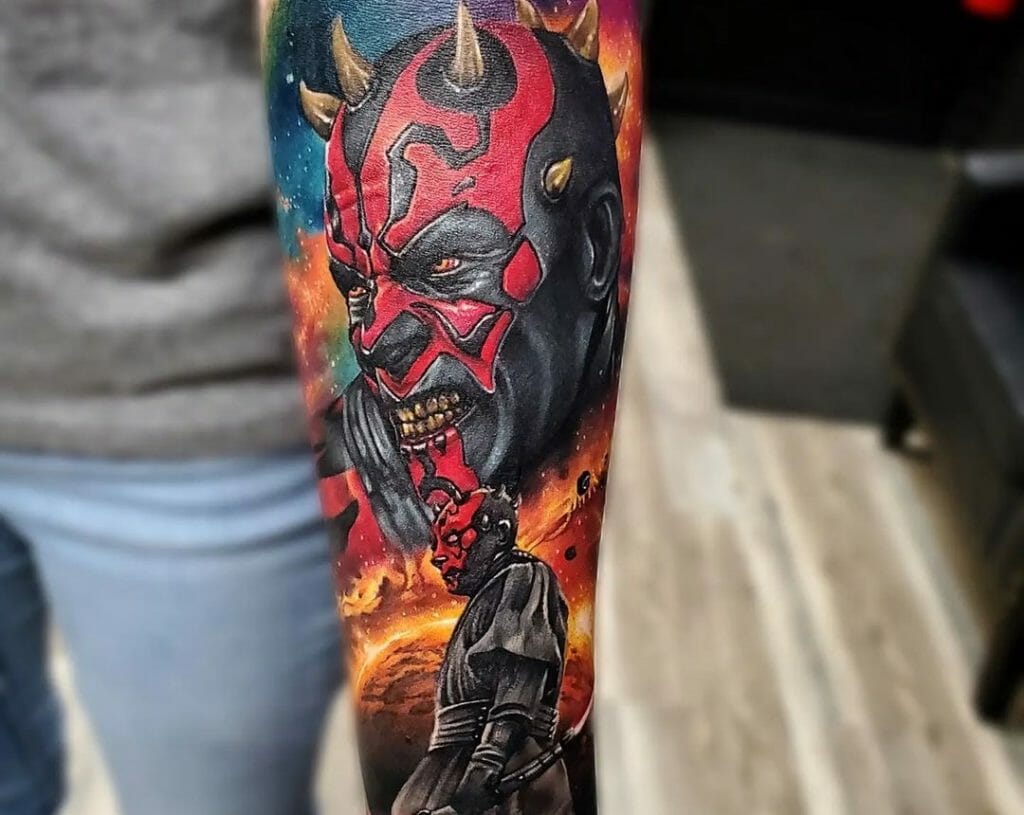 Looking for some mind-blowing Darth Maul tattoo ideas? In that case, here is the perfect list of some unique tattoo designs curated just for you!

Darth maul is not the good guy we often get inspired by, in one glance.

But then why is the character or the Darth maul tattoos so popular amongst the Star Wars fans? Well it is certainly the villain fantasy that comes in play here.

It is no secret that villains like Darth Maul have tragic tales which becomes a major reason for their character development owing to revenge and for our cool tattoos with sentimental relevance. Many of the enthusiasts are extremely inclined towards Darth maul’s story because of which the Darth Maul tattoo is regarded to be a cool stuff for the young fans in the fandom. Some of the most famous Darth Maul tattoo designs or Sith tattoos are inspired from Darth Maul in Obi wan Kenobi series , Clone Wars movie, Darth Maul : Apprentice , Star Wars: Phantom Menace.

More like a heritage of the Darth maul tattoos in this franchise world, Darth maul is the reflection of surviving amidst trials and the hunger for victory in his quest is what appeals to the young fans a lot. The colour portrait tattoo here shows one side of the face in a close angle and signifies that it is in it’s action mode.

The rightful emperor turned villain is one trope the universe is forever a fan of. And referring to the backstory of Darth Maul and how he is seen to be representing everyone who has been put down all through their lives, the aggressive face of the Sith lord with horns is what reflects the fight and struggles. With our sleeves having a long space for the tattoo to be featured, this ferocious piece is perfect as a sleeve tattoo.

A sketch tattoo in grey is attractive to people especially who like the raw work of art based in the backstory of the character portrayed. The powerful Sith lord was once a guy who was abducted by Sidious as a child who trained him as a secret apprentice. As shown best in Clone Wars, a raw, sketch tattoo with a hooded shroud, sans the horns of the character portrayal there is a perfect fit.

Darth Maul Tattoo With A Shade Of Anime

Darth maul is the dangerous guy trained by the evil Sidious hence a face with markings the thought alone of which can raise a hair or two. But to add a bit of cherry blossoms and the aesthetic of anime can act as a wonderful fusion of two forms of art and industry and even the most orthodox fans in this planet will agree to it. Even better if the face of Maul from Phantom Menace is combined with an anime antagonist for a better order and design.

With the folds of the black shroud noticeable and markings of a subtle blue shadow on it , this sort of neo classical tattoo is for the ones who like the tattoos to be accentuated with a sharp texture. Every crevice on the face of the Sith with the eyes glowing for revenge perhaps before slaughtering the people in planet Raydonia which caught the attention of Jedi , this tattoo speaks the exact scene one wishes to remember Darth Maul in.

Darth Maul Lightsaber Tattoo At The Back

Darth Maul was different from other Jedi. Not only because of his avid thirst for revenge and warfare but also for that red bladed Lightsaber with markings of warfare. The lightsaber is the identity of Darth Maul so this lightsaber tattoo is a heritage design for the lovers of Star Wars especially for the ones who root for Darth Maul.

The Darth Maul tattoo is an obvious choice for all the Sith Darth Maul supporters but with a fearsome samurai mask sort in it? Not the most obvious choice in this genre of tattoos. Infamous for the ferocious face , the fear factor of Darth Maul is more prominent due to the appearance of it. So to incorporate the face of the demon Hannya on the Darth maul tattoo is like an interchange in two fandom culture with a similar aesthetic to it.

Technically the more difficult option amongst most other tattoos , the flamboyant, wild face of Darth Maul might not come to one’s choice but Darth Maul itself might hold a lot of relevance to the one who is getting tattooed. In that case, these minimalistic Linework Darth maul tattoos is a suitable option which brings the essence of figure as well as be low-key in it’s nature.

Darth Maul might be scary but is a gangster any less scary? Club them up and it will be one funky darth maul tattoo design. With the cool chain that features a pendant resembling the Lightsaber and the quirky cap, tattoos like this can inject a sense of adventure in anyone.

Traditional Darth Maul tattoos are great until an eye of the dark and agile warrior comes into the play. An eye tattoo signifies the very essence of being alive as it symbolises the awakening of a presence. A design of an eye tattoo generally can also signify cultural significances so to combine it with that of an evildoer is something that can stir debates easily. Which in all senses, is something exhilarating. The eye in this Darth maul tattoo talks about the ferocity of the mastermind with eons of struggles before becoming the ferocious Lord. So it is one of the best designs a Darth Maul tattoo fan can choose.

As the Star Wars fans claim, the universe of this franchise is as massive as a galaxy. To exchange theories and information , to get tattoos suiting their choices and fantasies is something every fan in the planet will love to do at any given time. The Darth Maul tattoo has been a quintessential choice of tattoo design because of the “Rooting for the enemy” trope. The angle of the agile, evil Darth sidious being the master here gives it a vicious note to the significance of the tattoos. And with this changes that we have seen in the character of Darth Maul itself is often reflected in the Darth maul tattoos too. Which is why the price of the tattoos might vary accordingly and feature an array of designs and more than one classic example of the tattoo.

For more Darth Maul tattoo design , one can refer to these