101 Best Dark Tattoo Cover Ups That Will Blow Your Mind! 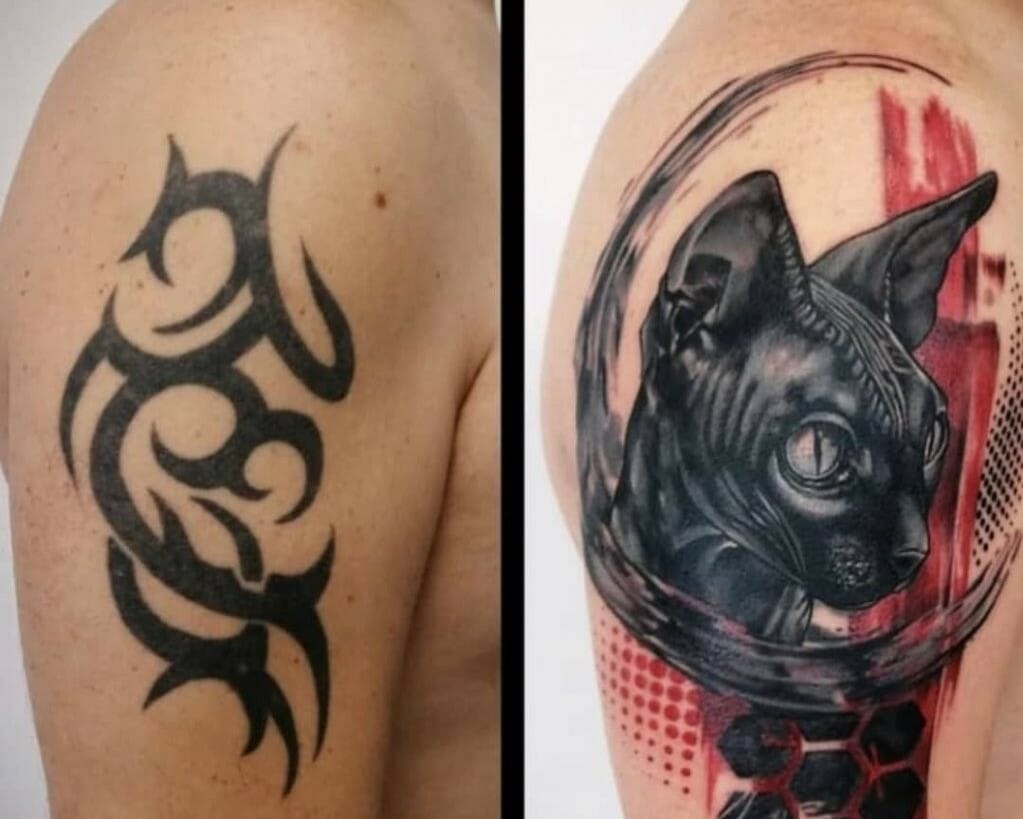 Looking to cover up a tattoo that you had previously made? Well, we have some amazing dark tattoo cover-up ideas that will definitely appeal to you!

As your body grows with time, your older tattoos do not tend to match the newer ones.

It is possible that your older tattoos have been made with dark black ink, however, they have faded over time. The best way to deal with that is to make a cover-up tattoo on it that looks bold and beautiful.

There are several tattoo artists who are experienced in this area of cover-up tattoos. The best way to work for a cover tattoo is to make sure that the base layer for the new tattoo is either similar to the older one, or you can fade it with laser removal and use it as the negative space for the new design. The most common reason for a cover-up tattoo is that the design is no longer in fashion. The tattoo has faded over time or the design looks distorted because of the body changes. The dark ink of the previous original tattoo may seem like a barrier for the new one. However, talented tattoo artists have creative problem-solving skills. With the blending of several different colors, using shading and detailing method, the tattoo artists can make and create beautiful designs that will easily draw attention away from the previous one. The most important factors to keep in mind while making a dark tattoo are to understand how the previous tattoo has been saturated, the size or the area in which you want the cover-up tattoo, and how flexible you are with the outcome of the design. A person needs to keep all these factors in mind to create a cover-up tattoo because it is going to be on your body forever.

What are you waiting for? Check out the 10 beautiful cover-up tattoos below and select your design now.

Several people get their initial tattoos at a very young age. At that age, people do not consider the deep meanings of the tattoo. They like it for the design or for its trend. This could be one of the reasons why that tattoo has faded in color as well as in trend, and you want something new.

In this design, we see that the previous tattoo was of a hand holding a cigarette and best written below it. The entire tattoo has been made in black ink, but over time it has faded. So for the cover-up design, the tattoo artist has made beautiful sunflowers. A black sunflower represents intelligence, good luck, and longevity. The tattoo artist has used black, grey, and white ink to make these sunflowers. They are appropriately dark, which covers up the previous design and look absolutely stunning.

If you are a Star Wars fan, this tattoo is the perfect design for your cover-up tattoo. The previous tattoo appears to be of a dragon which has been placed on the forearm of the person. For the coverup design, the tattoo artist has made the tattoo of Darth Vader, one of the most popular characters in the Star Wars series. The detailing of this design is absolutely extraordinary. The artist has used shades of black, grey, white, and red to complete this design. It covers up the previous design completely. The bright red that makes up the sword of the dark Vader makes the tattoo more appealing. If you are looking for a cool and trendy design as a cover-up tattoo, this tattoo is something that you should definitely consider.

Koi Fish tattoo is one of the most popular tattoo designs, especially among Japanese people. The Koi is generally made with different bright colors. However, to cover up a previous design, this tattoo has been made with shades of black, grey, and white. A black koi fish is generally a representation of masculinity as it also is a symbol of fatherhood. It is also a symbol of the struggles a person has to go through in one lifetime. In the previous design, the person was wearing a Lord Shiva and a snake tattoo. However, that tattoo appears to be faded. It was given maximum coverage with the Koi fish tattoo and the beautiful waves behind it. The detailing and the intricate lines of the tattoo make this design more appealing.

A rose is one of the most common designs used as a cover-up tattoo. Roses are a representation of passionate love. They are also seen as a symbol of devotion to God. The meaning of each rose depends on its color. In this particular design, we see that the previous statue was made of black and it has a guitar, some stars, and a bird sitting on it. This tattoo appears to be faded and on top of that design, the tattoo artist has made a beautiful, realistic representation of a rose. This role has shades of white, pink, and red. To make the tattoo more appealing and to give it maximum coverage, the artist has put splashes of black ink behind the Rose and some geometrical designs in black color ink as well.

An owl tattoo is a representation of mystery magic as well as wisdom. According to certain cultures, especially the Native American culture and owl is associated with the afterlife and considered a spiritual guide. These designs are not only unique and attractive, they are also extremely meaningful. Some cultures considered an out at you to be really lucky. The first tattoo of the person appears to be of a foreign and a portrait of a lady. If you look carefully, laser tattoo removal surgery has been used to fade that tattoo, and then the owl was made on top of it. The artist has used fine line work of black and grey ink to make this design. They have highlighted the eyes of the owl with some white ink. Each weather of the owl looks realistic because of its fine strokes. A beautiful dark cover-up tattoo that could be perfect for your next choice.

Celtic knot tattoos are one of the most common and popular tattoo designs. A Celtic knot represents the continuity of life with no beginning and no end. It is a representation of the internal spiritual life and its unity. The lines that interview within the symbol are unbroken and in one flow.

Black Panthers are considered to be fierce animals that are loyal and caring towards young children. A Black Panther tattoo symbolizes guardianship, courage, freedom as well as power. The previous design of this tattoo on the upper arm is not very clearly visible because it has either faded on its own or by laser treatment. However, to cover it up, the tattoo artist has made a beautiful design of Black Panther with black ink. Certain areas have been highlighted with white ink.

When someone opts to make an elephant tattoo, they go for a large and grand design instead of a small tattoo. An elephant is a symbol of loyalty, strength, good luck, and divinity. If properly planned, with the help of talented artists, this tattoo can look majestic on the body. The Elephant tattoo has been used to cover up a smaller Indian God tattoo which has faded. The tattoo artist has used black and darker shades of grey to make this design. I this large tattoo is a clever and easy cover for the previous tattoo.

This tiger tattoo perfectly covers the previous design. A tiger tattoo is a symbol of strength and raw power. They are seen as the representation of independence and freedom. The person who is wearing this tattoo previously had a smaller tattoo of a tiger ready to hunt. However, after that design faded, the person went for a larger tattoo covering the entire upper arm. The tattoo artist has used fine line work and dotwork art with grey ink to complete this design. Each stroke is so intricate and soft that it makes the tiger look almost realistic.

A person goes for a cat tattoo, either in memory of their previous pet or to bring good luck to their lives. The previous tattoo design appears to be of some Greek runes which have been made in solid black ink. The new tattoo is of a black colored cat. The artist has used shades of black, grey, white, and red to complete this design. A pet tattoo makes a meaningful coverup tattoo.

We hope you liked our ideas of covering up your existing tattoo with some beautiful new designs. One must carefully decide which design to put on their existing inks so that it looks brand new. If these designs are not enough. You can explore further by checking out –

What is the best way to cover up a solid black tattoo?

What are some common cover up tattoo mistakes?

How much does it cost to cover up a solid black tattoo?

How painful is it to cover up a solid black tattoo?

How long does it take to cover up a solid black tattoo?