101 Best Dark Skull Tattoo Ideas That Will Blow Your Mind! 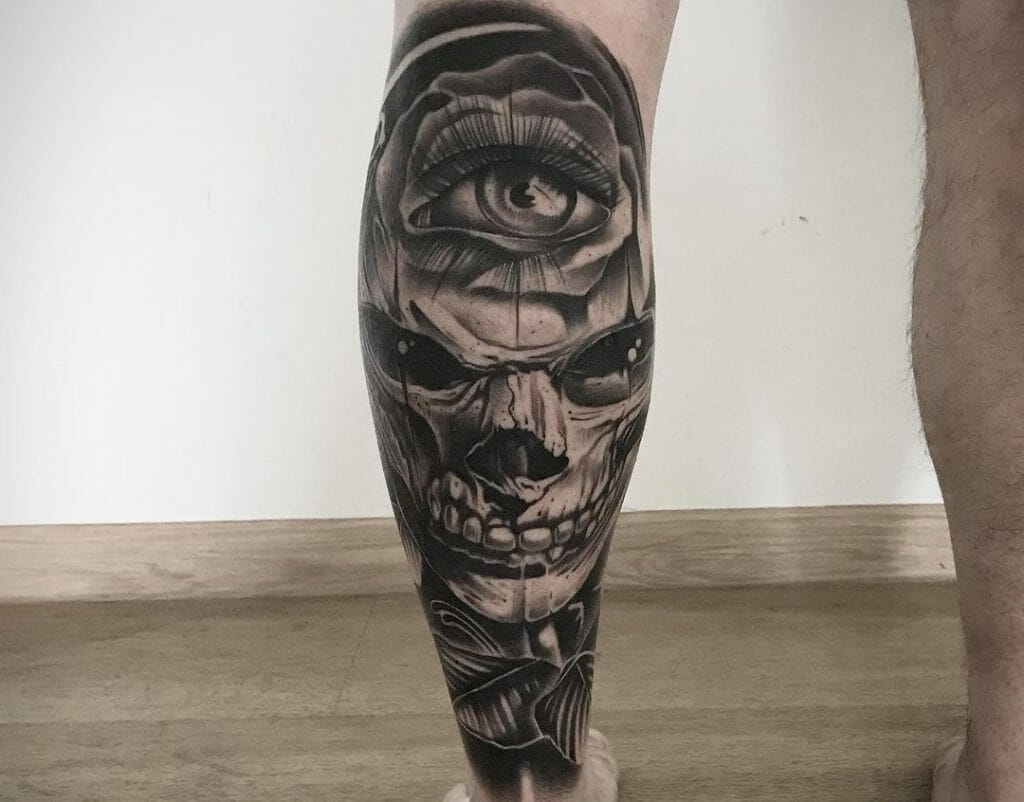 Have you always liked skull tattoos? Here are some ideas that you can check out before booking your next inking appointment.

When it comes to skull tattoos, the first step is to determine which skull you want to go for.

When it comes to dark skull tattoo ideas, the variety is endless. Whether a man or woman, anybody can rock one of these pieces.

Skull tattoos by themselves hold the symbolic meaning of the balance of life and death. The idea that nobody can escape death, and acceptance of the same as a part of life. Although, over time, people have gotten creative, and the meaning of skull tattoos have evolved, especially when paired with a different element. From prestige to triumph, the meaningful symbolism of skull design can be interpreted in various ways, thus giving new significance to each piece.

The moment we see this skull with a crown tattoo, we get contemplative. The combination of the crown and skull reminds us of a dead king. The crown is elaborate and bejewelled with many precious gems. The imagery stands for a greedy king, who cannot let go of his desires even after his death. Therefore, even after death, he cannot find solace. The realistic details of the human skull drive this point home, with the help of the crooked teeth.

Since the skull with crown tattoo is a comparatively small skull tattoo, you will be able to ink this one anywhere you like. The tattoo design is a good reminder to be humble, as the skull symbolizes the abuse of power, and asks one to use their power wisely.

This Indian skull tattoo shows a girl of the Native American tribe on one part, while the other is a half skull tattoo. The intricate headdress present on her head is something that will be usually worn by a tribal head or chief. Because of the immense respect for such a figure, such an Indian skull tattoo also stands for somewhat different values. Qualities as wisdom, respect and power are associated with such a skull chest tattoo.

While 90% of the tattoo is a play of black and grey, the key point of this half skull tattoo lies in the red face paint. While usually, it denotes war and bloodshed, as face paint, it stands for happiness and beauty, becoming a good reminder to find the good in bad. Since the skull tattoo design is quite large, you might need more than one session to complete the tattoo.

Are you a One Piece fan? This iconic skull and crossbones tattoo then hardly needs any explanation. The blue stands for the vast and free seas, that the protagonist so craves. The straw hat with the red ribbon on the skull automatically reminds us of none other than Luffy. The colours on this tattoo have been intentionally given a watercolour effect. The tattoo has a more realistic skull than the one we are used to in the anime.

As explained in the anime, this typical Jolly Roger skull tattoo stands for the spirit to fight for your freedom. Hence, the skull and crossbones tattoo calls all the rebellious ones who dare to stand against injustice, and possess a spirit of adventure within them. You can even customise your pirate flag tattoo, just like in the anime.

Into The Woods Skull Sleeve Tattoo

This deer skull tattoo teleports us to a mystical forest when we look at it. With few images, the skull sleeve tattoo suggests a lot. Deer skulls by themselves symbolize death. There is also the image of a woman, who looks like a Goddess, more specifically, Goddess of Nature, taking care of her children on their path to the other side. The dark moon skull tattoo exudes an aura of mysticism about it.

The whole thing is inked in the background of a mandala. The emphasis on the eyes with the white ink makes the Goddess look so lifelike. Needless to say, if you like this upper arm tattoo, you need to find a skilled tattoo artist.

All the Greek Mythology geeks, come out of your cave. While Cerberus is a hell hound, the tattooist envisions the skull tattoo as a wolf skull. The details on the realistic skull take you to the land of the Dead. Instead of the usual smoke skull tattoo, here, the smoke is a bright red, reminding us of death and danger.

Even if the skull tattoo has many elements, it is done on a fairly smaller surface area and will fit perfectly as a forearm skull tattoo. The tattoo is a motif to understand death and the afterlife. With the shackles highlighted, it shows that the individual is struggling, and trying to break free from all that is holding the soul back. To ink this skull tattoo to perfection, all you need is money and the help of some experienced hands.

If you are even mildly familiar with the Aztec Culture, you surely know of the God of the Dead. The Aztecs largely believed in life after death, which is eternal life. Therefore, this feather tattoo indicates many more positive things, like childbirth, and fertility, along with the belief in an afterlife.

The tattoo is big enough to work as a fantastic half sleeve tattoo design if you are looking for one. The vibrant headdress with feathers contains hues of red, pink, green and much more, making it hard to look away. Even the traditional ornament is found in the design. Since this is a forearm skull tattoo, prepare yourself mentally to commit to this design. It will be great as a cover-up tattoo.

This ram skull tattoo can be considered body art. It spreads as a skull chest tattoo, covering the entire breadth. This is one of the popular skull tattoos for men. The ram skull is extremely realistic, with the details running all over the distinctive curved horns. The longhorns are what separates it from any goat skull tattoo.

Throughout the body of the longhorn skull tattoo, you find a snake tattoo running. The snake wraps itself in a fashion that gives the impression of a third eye in the skull. Together, the symbol for the devil can hardly be ignored. The skull is made to look like the original with the help of highlights as the masterstroke. The dead skull tattoo can be great for those who need to get inked in a place, that will not be visible during a corporate meeting.

What Lies Beneath The Mask Tattoo

This is a traditional skull tattoo with a twist. The length of the tattoo spreads over the entire upper arm from the shoulder to the elbow, making it a great half sleeve tattoo. The dark aura of the skull for this tattoo is on point.

The is a very meaningful tattoo. It asks people to peer into what lies beneath the outer appearance, and that, what is present inside is what matters most. Instead of doing any random portrait, you can ink your face for this skull hand tattoo.

The simple design of this punisher skull tattoo makes it feasible to be inked anywhere, and any size, even in the most tricky places. If you are a fan of Marvel Comics, you probably remember this design. This skull is synonymous with the idea of vengeance.

To add depth to the skull tattoo, a watercolour effect is applied to the skull. The smearing style is on purpose, making the work look as though it were a dark skull sleeve tattoo drawing.

What is a candy skull without some splatter of colours? This sugar skull tattoo is, of course, inspired by the celebration of the Day of the Dead. The day is about paying respect to your ancestors, and the tattoo likewise, insists on the idea of rebirth in the afterlife, taking the mortifying effects of death away. The glowing eyes through the sockets call for special attention. Instead of distinct lines, the colour is spread in a peppering fashion all over the sugar skull tattoo.

Skull tattoos can be anything you like them to be. Whether you want to be a badass, or you like the sugar skulls, everybody can find something for themselves.

Hold on, we cannot just get over the dark skull tattoos yet. There are a few more that we must mention before closing the discussion:

What does a dark skull tattoo mean?

Generally speaking, a dark skull tattoo can mean many different things depending on the context and placement of the tattoo. In some cases, this type of tattoo may be meant to symbolize death or mortality, while others may see it as a sign of strength and courage. It could also represent power, fearlessness or even rebellion. Ultimately, individual interpretations of a dark skull tattoo will depend on the overall design and placement of the tattoo. It could also be used to commemorate a lost loved one or serve as a reminder of life’s fragility. Whatever meaning is behind it, such tattoos can make for powerful and meaningful body art.

What is the symbolism behind a dark skull tattoo?

The symbolism of a dark skull tattoo can vary depending on the design, placement and context. Generally speaking, it could represent death or mortality, strength and courage, power, fearlessness or rebellion. It could also be used to commemorate a lost loved one or serve as a reminder of life’s fragility. Ultimately, individual interpretations will depend on the overall design and placement of the tattoo. No matter what meaning is behind it, a dark skull tattoo can be an powerful expression of personal beliefs and feelings. It could also represent that individual’s thoughts on life, death, and the power we all have to make choices in our lives.

What are some of the most popular dark skull tattoo designs?

Popular dark skull tattoo designs include realistic skulls, abstract skulls, cartoonish skulls, and various animals rendered in a skull shape. Additionally, many people choose to incorporate other elements such as flowers, daggers, flames or even words into their dark skull tattoos. Popular placements for dark skull tattoos are on the arm, shoulder, chest and back. Ultimately, the design possibilities are endless and can be used to express an individual’s beliefs and feelings in a meaningful way.

How can I personalize my dark skull tattoo?

The possibilities for personalizing a dark skull tattoo are endless. One way to make the design more meaningful is to incorporate symbols or elements that are specifically related to the individual’s beliefs and values. For example, some people may choose to add a religious symbol or phrase, while others may opt to include flowers and colors that represent loved ones who have passed away. Additionally, some people may choose to use a specific type of font for the text or incorporate a specific theme (such as horror or fantasy) into their design. Ultimately, personalizing your dark skull tattoo is all about finding a design that celebrates your unique beliefs and values.