101 Best Dachshund Tattoo Ideas That Will Blow Your Mind! 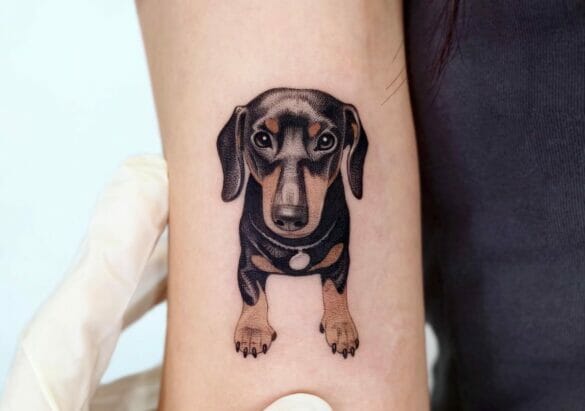 The dachshund dog is one of the most famous dog breeds in the world for its fun-loving, playful, and outgoing nature.

The Dachshund is recognized for its signature short stubby legs and saggy ears. This energetic breed is also known as sausage dogs and wiener dogs.

The American kennel club recognizes 190 breeds in America; the Dachshund dog is one of those proclaimed and famed dogs that has been a family favorite because of its sweet adventurous and dauntless nature. These wiener dogs were bred for hunting badges, and their full name in German translates to ‘dog badger.’

Dachshund dog has a long face, saggy ears, and stocky legs. They are excellent as pets and generally known to be gentle and kind with kids and family members. The three coat varieties of the dog have distinct personalities according to some dachshund owners, and it is no wonder why dachshunds are a favorite among tattoo enthusiasts and dog lovers.

The Dachshund is often undervalued because of its short, dwarf legs, but these brave and valiant dogs can stand up to big dogs and can be a wonderful watchdog for your family. The dog might be short in size, but dachshund owners adore their pets because of their exuberant, fun-loving, and cute habits.

The most touching way you can remember your living or expired furry friend is to get a dog face tattoo and forever etch the story of you two on your hand. The dachshund tattoo is based on the picture of a dachshund, and the artist has modified the picture by adding cute touches such as bright flowers around the brightest ray of sunshine.

Dachshund dogs are adorably called wiener dogs, sausage dogs, or doxie, and their short and cute legs are the specialty of this German breed. The strong and muscular legs were ideal for the hunt of the badges, and the modern dachshund dogs carry the trait of digging and are alarming to strangers.

Among Unique dachshund tattoo ideas, this dachshund tattoo on this artist’s account, with kind eyes and their sweet lovely face, is heartwarming, to say the least. Three dachshund tattoos wrap the arm and give a deep sign of how you are their world for your dogs and how they fulfill your life with their presence. This tattoo can be customized into a dachshund tattoo outline with just two beady eyes.

There is hardly any unsatisfactory comment about these charming and ever-fun-loving animals. These Dachshund dogs first came to the USA in the early 18th century and were acknowledged by the American kennel club. They became famous in the twenties and got the name badger dogs in the wake of the first world war.

For the minimalist souls in search of a dog tattoo that is minimal and impactful and tells the special story of a pet and a human, this dachshund outline tattoo with a single line is a perfect match for them. This is an appropriate tattoo collection to add to the gallery of tributes of tattoos dedicated to your loveable pet.

The Dachshund dog was used for races and entertainment but banned by the clubs of America to protect this breed from abuse. The cute sausage dogs are intelligent, sharp, and funny and often love to be cuddled by their human.

Do you want to always remember your little bundle of joy in an amusing way to remind you of their witty and charming nature? This unique Dachshund wiener dog tattoo sitting with a plant in hand with flowers coming out from them no doubt tops our list of the most adorable Dachshund tattoo to exist in our search log.

As a dog breed, Dachshund is bold and is not usually dependent on a human. That makes the dog a mixed choice for a pet. Only love, proper training, and an adequate amount of exercise can help keep the dog fit and active in their regular life.

The dachshund tattoo is done in such a manner that it gives the impression of a pencil sketch. Suppose you are in search of a traditional dog tattoo. In that case, this dachshund tattoo is something you can consider to show your ceaseless affection for your fluffy friend, and it is an appropriate tattoo for all dog lovers.

The primary thing that enters the mind when somebody mentions a dachshund dog is their kind and empathetic eyes. Their eye color varies between green, light gray, and brown shades. Three coat varieties of this dog have different types of hair; the dachshund with long hair tends to have wavy hair, while the smooth variety has comparatively less hair than the earlier one.

The dachshund tattoo by the username ‘cheonatattoo’ has made this adorable dog tattoo by using a real-life image of a dachshund, and its heart-shaped nose with chestnut brown coat wins the heart. We could not think of a better and more apt tattoo tribute to this resilient and intelligent dog breed than by getting inked with this one.

Dachshund owners are aware that though the dog was originally bred for catching badgers and small creatures, this incredibly quick-witted and fun-loving dog with a fondness for digging does not like to play by the rules. But if trained properly and taken care of, they are a gem to have in your house and protect the household.

If you are a fan of graffiti and dogs, then this cute tattoo on account of ‘trashtristantattoo’ is something you can consider as a collection add to your other tattoos. These dog tattoo ideas are fun and reveal this German-origin dog’s naughty and playful side. We can see two dogs drawing graffiti and having a blast with it, and such a scene would always bring a smile to the face of dachshund owners.

Keeping in mind the increasing popularity of these short and affection sausage dogs, The dachshund club of America came into existence in the early 19th century to make people more aware of the characteristics and traits of this lovely dog.

You might have had in your search log the list of tattoos that can be a touching expression of sincere love and gratitude to your dog who has expired; this tattoo can be a great link between the beautiful bond that exists between a human and an animal.

The dachshund was originally a hunting dog, and after world war I, because of its German link, it had to go through some difficulties. The associations related to the dog took the necessary steps to ensure they were treated well. They are a much-beloved dog in the United States and have gained fame as a family pet in recent years.

Are you searching for a dog tattoo that would be a nice collection to add to your existing tattoos and looking for a way to link all your loved ones.? There is no better way to do that than by getting a tattoo linking the colors of your family members’ birth flowers and your dog’s face.

There aren’t the latest stories available in the dog universe about Dachshund due to its linking to hunting origin and aren’t much heard of being a family pet. Undoubtedly, they are independent and stubborn, but with appropriate training, they can be the best.

The dogs are by nature good at digging and finding small animals from god, and this sign of a black hole is a link to their hunting background this dachshund tattoo is creative and thoughtful in every way. There is no invalid point in not getting this amazing tattoo done quickly.

The Dachshund has gained a reputation and received genuine comments over its kind, considerate nature and its ability to create a good bond with humankind like all animals do. This tattoo is a wonderful way to forever link the bond between you and your dog. We have added five more tattoo suggestions to consider for your next tattoo.

What is a dachshund tattoo?

A dachshund tattoo is a popular tattoo design that features the outline of a long, slim-bodied dog with short legs. The breed is commonly referred to as a “sausage dog” or “wiener dog,” and its silhouette has become widely recognized around the world. Dachshund tattoos are often chosen by people who have a special connection with this breed, and the symbolism behind them can range from celebrating life’s little joys to honoring a beloved pet. They also make great conversation starters, as everyone loves talking about their own personal stories involving dachshunds! No matter what prompts someone to get a dachshund tattoo, it’s sure to be a unique and meaningful piece of art.

How do I choose a dachshund tattoo design?

When selecting a dachshund tattoo design, it is important to take into account your own personal style and preferences. Consider the size and placement of your tattoo, as well as any colors or additional elements that you may want to include. You can also look at photos of other people’s dachshund tattoos for inspiration. If you’re considering a portrait-style tattoo of your own pet, be sure to find an experienced artist who is capable of capturing the likeness and personality of your pup. Whatever design you choose, make sure it reflects something meaningful to you and that it will stand the test of time.

What are some of the best dachshund tattoo ideas?

Some of the most popular dachshund tattoo designs feature realistic renderings of the breed, often with playful elements such as hats or bows. You can also opt for a cartoon-style design, which gives you more freedom to be creative with color and additional elements. Other ideas include minimalist tattoos of dachshunds in silhouette form, or black-and-white sketches of the breed. No matter what you decide on, a dachshund tattoo is sure to be an eye-catching and meaningful piece of art!

How much does a dachshund tattoo cost?

The cost of a dachshund tattoo will depend on the size and complexity of the design, as well as your artist’s experience and skill level. Generally speaking, you can expect to pay anywhere from $50 for a small tattoo to several hundred dollars for a larger piece. Be sure to ask around for prices from different artists before settling on one, as costs can vary widely. Also, be prepared to tip your artist for their hard work!