101 Best Cuphead Tattoo Ideas That Will Blow Your Mind! 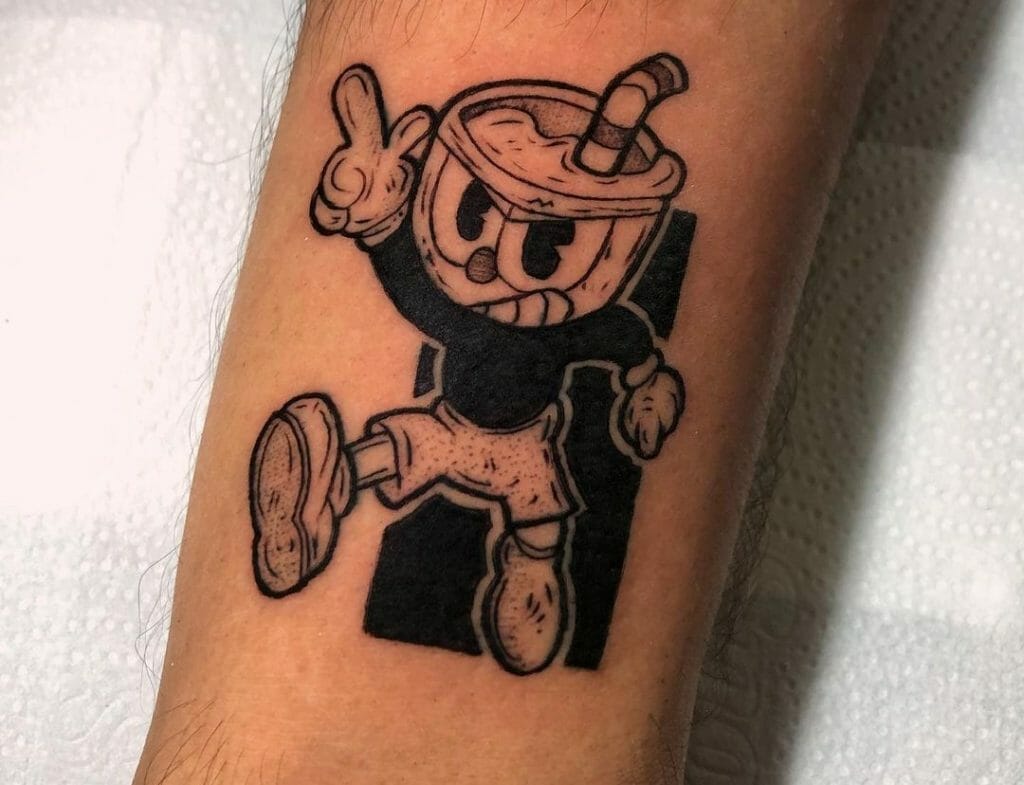 The best Cuphead tattoos all in one place! Select the right game character tattoo design from below to ink yourself with ideas from your favourite game!

A lot of people have loved the Cuphead game.

The characters of the Cuphead game have become an inspiration for many tattoo artists to bring in the characters to tattoo arts. It is a systematic game with unique challenges and rules that puts all your skills, reactions, multitasking abilities to the test.

The different phases that the player has to win to reach the last group are pretty challenging. Even though the game is a bit difficult, the fair gameplay nature attracts many to the game. Also, video game fans love to get Cuphead tattoos to represent their love for the game.

The word ‘Cuphead’ is written in orange ink under the prominent tattoo. The big eyes and the open mouth of the Cuphead man make the tattoo more appealing.

Don’t Deal With The Devil

The black Devil of the Cuphead game is portrayed in this Cuphead Devil tattoo. The combination of red and black colours gives it a sinister look, staying true to the character. The Devil is a challenging Cuphead and his brother Mugman with cards in his one hand. On the other hand, the Devil is depicted as holding onto his three-headed spear. The typed arrow tail features his evil demonic character roll. He is standing on two red and white poker coins. Two long white horns add up to the evil look of the Devil.

Such designs can be found on the internet very easily, and you should go for them if you have the time and the patience to get them.

People ruin Cuphead points by facing the Cuphead ghost and losing the level. Along with Cuphead mermaid tattoo designs, you might find this Cuphead ghost tattoo on the list of favourite Cuphead tattoos. The whole ghost tattoo is given a reddish colour. The blank black eyes of the ghost give it a more scary and deep look. The detailing of the teeth and the eyebrow hump includes white inks in between the bright crimson red colour. The ghost is flying with its hands in front, coming to catch the guys. This is an easy-to-ink tattoo, and you might choose this if you are a bit short on time!

This Cuphead skull tattoo has unique images of both the Cuphead and the Mugman. These Cuphead tattoo designs have the word loser written on both characters’ cup faces, lined over the word.

The Cuphead and Mugman tattoo is given the right colour sets of both the characters in the game. This ruined tattoo look of the characters is a creative design made by the tattoo artist. The drops spilling out of the broken cup and mug, the tongues out, and the cross in the face give these legendary video game characters a distinct look of death.

We found this rarely used Cuphead tattoo design with a different outfit. With the Cuphead preorder, you might have found or seen this different avatar look of the Cuphead character. This Cuphead design has been done with the creation of the tattoo owner and is specially designed to be made into a tattoo.

A Cuphead fan who is crazy about the character would get this character designed differently. You can get this tattoo on your hand or even on your legs or shoulders. Apart from the familiar look of the Cuphead character, this Cuphead tattoo is of a different style and clothing.

This Cuphead tattoo of the character Mugman is ideally given the apt colours according to the game. The blue-coloured twin brother of Cuphead is shown quite in a happy state in this Cuphead theme tattoo design. The big blue nose pops out in the tattoo design bringing all the attention to its nose. One hand is raised, and the other is supported on his waist.

If you are a die-hard fan of the Cuphead game, then you should get a twin tattoo of this Mugman and his brother Cuphead together as a tattoo design on your arms.

Along with Cuphead eight ball tattoo designs, King Dice idea best highlights the different tattoo designs of the Cuphead themed tattoos. This medium-sized King Dice tattoo is given chiefly a purple-violet colour theme. The dice are passed a pink glow along with the pink highlights of the cheeks and the tongue. Three cards of diamond, hearts, and clubs are included in this tattoo design. Behind King Dice, a wooden board has been designed as a backdrop image for this King Dice Cuphead tattoo. The villainous King Dice is wearing a violet-purple coat with a bow at the neck collar.

The trio of the main characters of the game Cuphead is being portrayed in this Cuphead tattoo design. The Devil is given its own extraordinary evil black colour. The two brother duos have their identity colour of blue and red. The characters of Cuphead, Mugman and the Devil, the four cards and dice, and poker rings are included in this Cuphead tattoo. A pink fire as a backdrop design gives an excellent direction to the overall Cuphead tattoo design. A tattoo with such details can take a considerable amount of time to complete,

This Cuphead tattoo shows the image of the rocket puffing straight down. The rocket’s body is given a red colour, and the other parts are typical metal grey. The puff of smoke is displayed as three small grey clouds puffing out of the rear engine of the rocket. You can get this small Cuphead tattoo on your wrist or shoulders if you are strained for time!

Some more tattoo ideas for game lovers in you:

How much does a Cuphead tattoo cost?

The cost of a Cuphead tattoo can vary greatly depending on the size, design complexity, and location of the tattoo. The average price range is typically between $150-$300 USD. Prices may also increase depending on the time it takes to complete the tattoo and any additional colors or details required. It’s important to discuss your specific needs with your tattoo artist before committing to a design, so that you can get an accurate estimate of the cost. Additionally, make sure to ask about any additional fees such as touch-ups or aftercare products.

What are some of the most popular cuphead tattoo designs?

The most popular Cuphead tattoo designs typically feature the characters from the game. This could be a single character, or an entire scene featuring all of the bosses and enemies from the game. Other popular designs include Cuphead’s signature cup with wings, his iconic hat, and weapons from the game such as his blunderbuss and scissors.