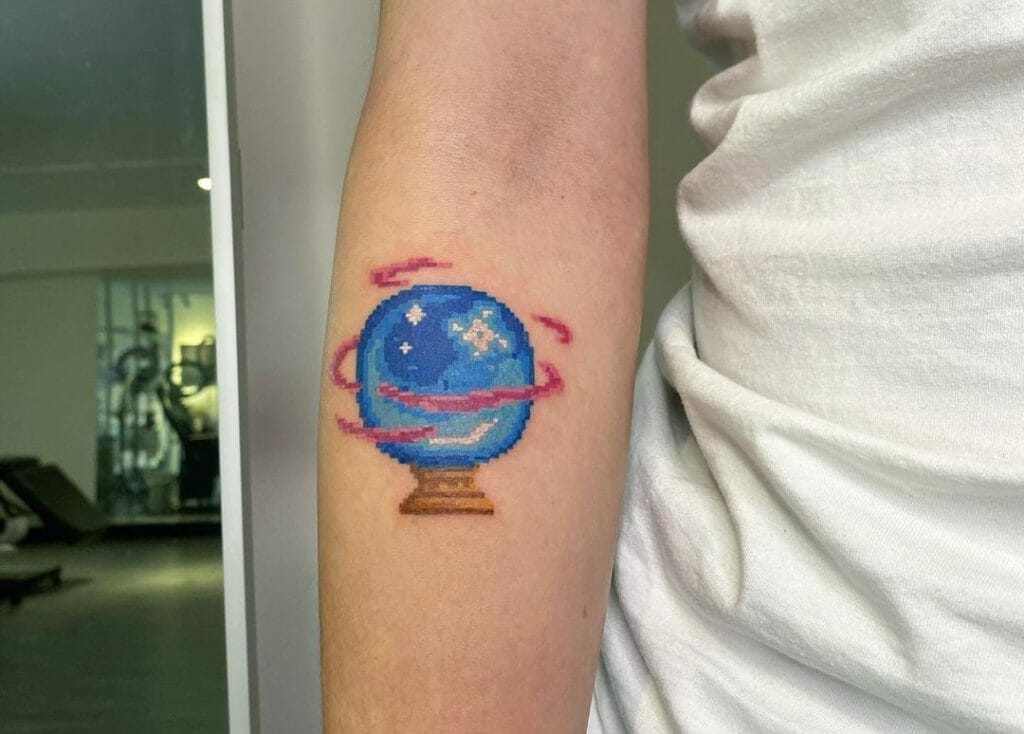 If you find the mysterious crystal ball intimidating, we have got a treat for you. Here are the best Crystal Ball tattoos for you tattoo enthusiasts.

A crystal ball has been used as an element of mystery and mystical powers for ages.

In mythology and fictional history, a crystal ball was used as a weapon by witches and wizards. People believed that a crystal ball has the power to see and predict the future.

For a long time, crystals have symbolised prophecy and wisdom. So, a crystal ball tattoo represents determination and strong character. Moreover, the depiction of a stone for some may also represent good fortune. Some people may also see the crystal ball as a guide for their life, just like a real crystal ball is believed to predict the future and warn you about any danger that might come your way so that you might find a way to avoid it. It goes without saying that the concept of a crystal ball tattoo is quite similar to that of an actual crystal ball.

Crystal ball tattoos are generally built on traditional neo style. Neo-traditional tattoos are flatter in appearance and have a 2D look, whereas today’s New School tattoos have a lot of shading to create a new level of depth to the design.

A tattoo designer may use a crystal ball tattoo to add a hint of mysticism to your character. You can also use it as a great ice breaker as you discuss your mystical beliefs with the next person you come across. So, if you are on the search for the perfect tattoo idea, you will get hooked to the following ideas we have prepared, just for you.

A crystal ball is expected to reveal things that are hidden or invisible to the naked eye. It can be an idea, a feeling of ecstasy, positivity or even negative thoughts.

A tattoo is also expected to reveal emotions or feelings buried deep into the owner’s heart and, be it a message they want to convey, an idea they believe in or a goal they have set for their character. So, when it comes to a crystal ball tattoo, it is usual for the owner to get a tattoo that would reflect his inner feelings and portray them on the tattoo.

This design depicts jewels hidden inside the crystal ball; the simple idea lets you speak a million words and express a million thoughts. If you are a person who has deep desires and really want to make a statement with your ink, this is the best pick for you. It will add a mystical notion to your character and help you enhance your presence among your friends.

Fortune tellers have been an interesting part of our community. They set up shops in common fairs, and people paid quite a fortune to know their fortune. See what we did there? Inside their shop, there used to be a common site where the fortune teller would perform some enchantment, and inside the crystal ball, a small colourful smoke used to gather, and by the colour and measure of that smoke, the fortune-tellers could predict our future.

A pet snake often accompanied fortune-tellers in their camp-site, giving the whole act more weight towards mysticism; the same element has also been used here. The use of the colour purple also oozes out the magic of the tattoo. Besides all the things that this crystal tattoo stands for, this tattoo is also stunning and would look cool on your arms.

Crystal tattoos or a tattoo of a fortune teller ball may be common, but different tattoos tell different stories. Each design is unique, and each idea, like the next idea, appears to be the best one.

Here, the portrayal of two snakes intertwined with each other might be interpreted in various ways. The intertwined snakes can represent the complexity of life and the continuous cycle of time and life. However, from a different angle, if we consider beliefs from other cultures, it might also be interpreted as a symbol of fertility and a creative life force.

This tattoo is the best combination of deep desires and the magic of life.

The next person we must discuss while talking about crystal balls is the gipsies. Besides the fact that most fortune-tellers were gipsies, we must acknowledge that our ancestors made us believe that gipsies possessed some magical powers. They had a similar set-up like other fortune-tellers. But their way of talking and presenting themselves with eccentric jewellery made us believe that they really had magical powers.

However, the truth behind it might never reveal the truth behind it; you can still attach yourself to the whole concept of gipsies and their beliefs if you choose to get this crystal ball tattoo. This tattoo doesn’t only has a crystal ball as the centre of its focus but has painted the whole site in one simple design. The artist has focused on the intricate floral jewellery that gipsies often wear to make their presence stronger. Though this might look a little over the top for a few folks, you will find yourself looking really incredible if you can pull this off.

When you search for a tattoo that has a direct connection with magical power and mysticism, your search at some point is bound to meet a tattoo based on a labyrinth style of tattoo art.

A labyrinth tattoo is basically a depiction of all the life’s puzzles one must conquer, solve, or pass through to reach the end of your life’s struggles finally. It is sometimes portraited by a picture of a maze or a puzzle and sometimes is depicted by a complex design with a short message that mirrors the final lesson one learn’s at the end of his life’s maze.

Here, in this depiction of the labyrinth tattoo, the artist paints a hand holding the crystal ball, with a message saying, ‘You have no power over me’ over the crystal ball tattoo, meaning the owner himself holds power to his life and the key to his success, no one else can control his thoughts and actions. This shows confidence and determination, a will to go through with all the struggles and appear victorious. This short message also shows your strengths as a person and your lack of insecurities.

Like fortune-tellers and Gipsies who claim to know all the mysteries of life, the all-seeing eye symbolises knowledge, power, and wisdom. Many cultures believe that this symbol represents the eye of God. Unlike the Egyptians who literally believe this symbol stands for the eye of The Sun God ‘Ra’, some cultures have come up with conspiracy theories that connect the all-seeing eye with a secret society that is believed to be the master of this world, who runs the whole world from underground.

The idea behind the crystal ball resembles this; we believe this relic holds power to reveal secrets of this universe that no one can fathom otherwise through their limited knowledge.

Now, coming to this particular crystal ball tattoo, which talks about knowledge represents intelligence, perception, common sense, rationality and understanding. You can easily show off your perseverance through this tattoo design.

In troubling times such as these, one of the few things we can do for each other is to provide support to the person next to us.

This optimistic tattoo design here gives out a positive vibe from the tattoo. If you are someone who loves to stay positive and believe in the concept that ‘every cloud has a silver lining’, this tattoo will be the best option for you.

This design not only will suit your outgoing personality but also provide the person next to you with some hope. It’s like someone seeing far ahead in their life and knowing that everything will be alright, just like the tattoo says. Maybe it won’t solve anyone’s problems, or you for that matter, but a little ray of hope goes a long way. So go ahead with this option, and everything will be alright.

Introduced in The Harry Potter Series, which automatically relates it to magic and mysticism, the golden snitch is an instrument used for the magical game of ‘Quidditch’. Though it is part of a game, it has a mind of its own, almost like a living thing.

It represents speed and flight, which can be translated into denoting freedom and vitality. Thus, the tattoo of the golden snitch has gained popularity over the years. The design is very minimalistic in nature and would fit perfectly behind your ears or on your wrist.

‘In search of gold, we lost a diamond’; this phrase is ubiquitous in today’s world. The purpose of mentioning this is to make you aware of how we tend to look for more complex and intricate designs when we search for things like a tattoo design. We miss the simple designs that are right in front of our eyes.

Tattoos like these often get lost among far more complicated ideas. Even when we are trying to search for a simple design, these tattoos often get overlooked.

The vibrant colours give the tattoo a great look. Though it looks similar to the symbol of the all-seeing eye we covered a few minutes back, the eye in the centre represents vibrance in nature and beauty.

Well, as the whole concept and ideas of a crystal ball comes from spooky stories and magical worlds of fiction, it is probably a good idea to end your search for the best Crystal Ball Tattoo with this design.

Here, the tattoo artist has created a design similar to actual spooky crystal balls that one could get directly from any shop during Halloween. It has got all the elements that one of a perfect Halloween experience.

The ball has a proper witches hat drawn on top of it and a giant smiling pumpkin head staring right back at us, with two haunted manors in the background. So, the next time you search for the perfect Halloween present for someone who absolutely loves Halloween, consider getting them this as a gift.

Some other Crystal Ball Tattoo Ideas you might find interesting.