10 Best Crusader Tattoo Ideas You’ll Have To See To Believe! 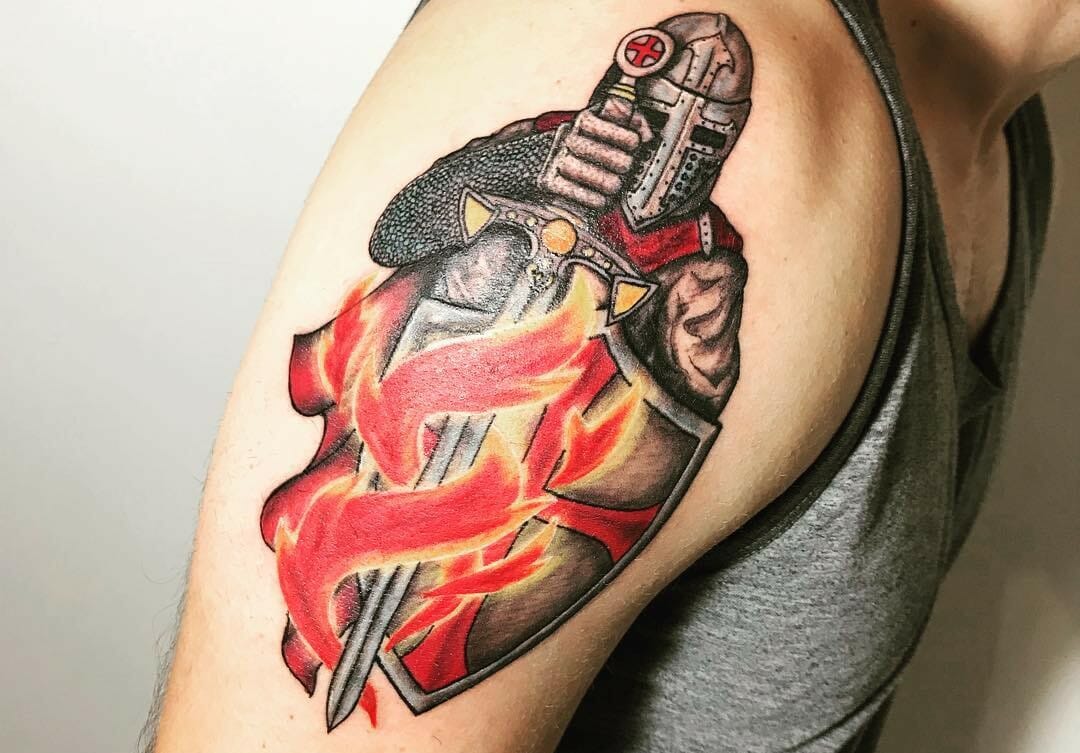 Are you a history nerd who loves to learn more about medieval history? Then here are some amazing Crusader tattoo ideas for you to see.

The Crusades were a series of wars started and supported by the Latin Church in the middle ages.

The Crusades were religious wars that occurred in the middle ages supported and directed by the Latin Church in order to check the expansion of Islam in the Middle East. The most well-known Crusades happened to the Holy Land between the 11th and 13th centuries in order to bring Jerusalem back under the control of Christianity.

A lot of people often wonder if Crusaders also got tattooes and they would probably be surprised to know that they did indeed get tattooes. After the course of their pilgrimage was over, Christian crusaders in the past started to get tattooed once they reached the Holy Land which was the birth place of Jesus Christ. The most popular tattoos used to be of saints, the Virgin Mary or the Crusader cross.

Even now, devout followers of Christianity consider Jerusalem to be a holy site and often ask to wear Crusader tattoos.

Under the direction of the Latin Church, many devoted European soldiers took up weapons to fight for their religion. Their main aim was to reclaim back their holy place from heretics of other religions. These knights were incredibly brave and strong. Known throughout Europe for their power, these knights were fierce in battle. As a result, they also gained a lot of respect.

Therefore, if you are looking for a medieval warrior tattoo, you might consider getting a Crusader tattoo with an armed knight. These tattoos would look amazing when placed on the upper part of your bicep area.

If you want your tattoo to reflect a darker side of history, you can also choose to get more violent Christian themes. Just like modern history, medieval history was also full of bloody wars among many religions as one religion tried to master the other. Thus, if you are on the search for a Crusader tattoo idea, you can also get a tattoo design that is full of symbolism. As seen in the picture, one knight is killing their enemy with a sword. Such a tattoo on your body would be eyecatching and arouse everyone’s interest due to its deep symbolism.

If you are looking for a knight tattoo design but do not want to get conventional tattoo designs, you can also ask your tattoo artist to create some unconventional tattoos of medieval knights for you. As seen in the picture, you can also get a tattoo of fallen knights in order to pay respect to their dedication and devotion to their religion. Each knight was a Christian who agreed to leave his family and children behind to join the religious war and reclaim the city of Jerusalem. The knights were revered throughout the world for their selfless bravery. Consequently, you could also get a tattoo design with a fallen crusader knight on your skin to portray a sadder side of history.

Ideas For A Crusader Tattoo With A Medieval Art Style

If you ever read an article about Medieval art style or see paintings from that period, you will see that the artists had a very peculiar style of drawing human figures. Therefore, rather than following the contemporary style of art, you can also ask your tattoo artist to make a tattoo of the knights but in a medieval way. This will create a unique twist to the Crusade tattoo!

There are very few tattoo artists who can create art out of any material. In the picture above, the knight tattoo is no longer just a knight tattoo but is a piece of art due to the wonderful tattoo artist. The usage of black ink along with other colours gives the tattoo a completely realistic feel. Thus, if you are looking for Crusader tattoo designs that will be appreciated by all, you should try out realistic tattoo designs that resemble art.

If you are also interested to learn about Celtic warriors, check out these fantastic Vegvisir tattoo designs that any Celtic history fan would appreciate.

If you are in the search for a perfect tattoo for your body that portrays the honour of the Crusaders, you may want to look at some dark and edgy knight tattoos. As seen in the picture, an expert tattoo artist has created a shaded effect with the help of black ink to make knight tattoos which look dark and gritty. You can also add a shield to your tattoo designs and have a fantastic Crusader shield tattoo created.

Crusader Tattoo Designs With The Armour Of The Knights

The armours that the Crusaders in the military wore would make for amazing tattoo designs. Nowadays, one can only find these armours in museums. Earlier, the Crusaders in the military could travel great distances wearing those armours to fight for their religion. Thus, if you are looking for Crusade tattoo designs, you can also get a detailed and intricate tattoo of the armour.

If you are looking for some inspiration about fierce warriors in other cultures, here are some wonderful Aztec warrior tattoo designs.

Crusader Tattoos With The Symbol Of The Holy Ships

The Crusade journeys were long-drawn wars that were incredibly hard on the brave knights who were fighting in them. These men had dedicated their lives to service for their religion and had to be prepared to face death as well. They often traveled in huge ships to reach Jerusalem. Thus, if you are in the search for Crusade tattoo ideas but do not want the same, old tattoos with knights, you can also ask your tattoo artist for a realistic impression of the Crusade ships.

One of the most popular Crusade tattoo ideas was to get one with the Holy Mother or Virgin Mary. The goddess is of paramount importance in Christianity because she gave birth to Christ. She also represents purity and love for all. Thus, you can also get a Crusade tattoo with Virgin Mary and the Crusader cross.

The Crusades are an important phase of history that shaped much of world and European history. A lot of medieval musicians also wrote folk songs associated with the brave knights who undertook the journey. If those songs inspire you as well, maybe you should also get a dashing Crusader tattoo with a knight or the Crusader cross tattoo!